Children are born into starkly unequal environments; they are also conceived in them. As my colleagues noted in a recent blog, a large number of studies identify a persistent and disturbing relationship: Children from poorer and less educated families are less healthy at birth, as indicated by birth weight and other measures. Moreover, birth weight predicts better health, educational attainment, and earnings in adulthood.

Data from the Centers for Disease Control and Prevention reveal huge race and class gaps in birth weight. Thirteen percent of babies born to black mothers enter the world under-weight. That is nearly twice the rate of low weight babies born to white mothers (7%). Education is also predictive. White mothers with no college education are 29 percent more likely give birth to a low weight baby than white mothers with a college education (6.5% vs 8.4%): 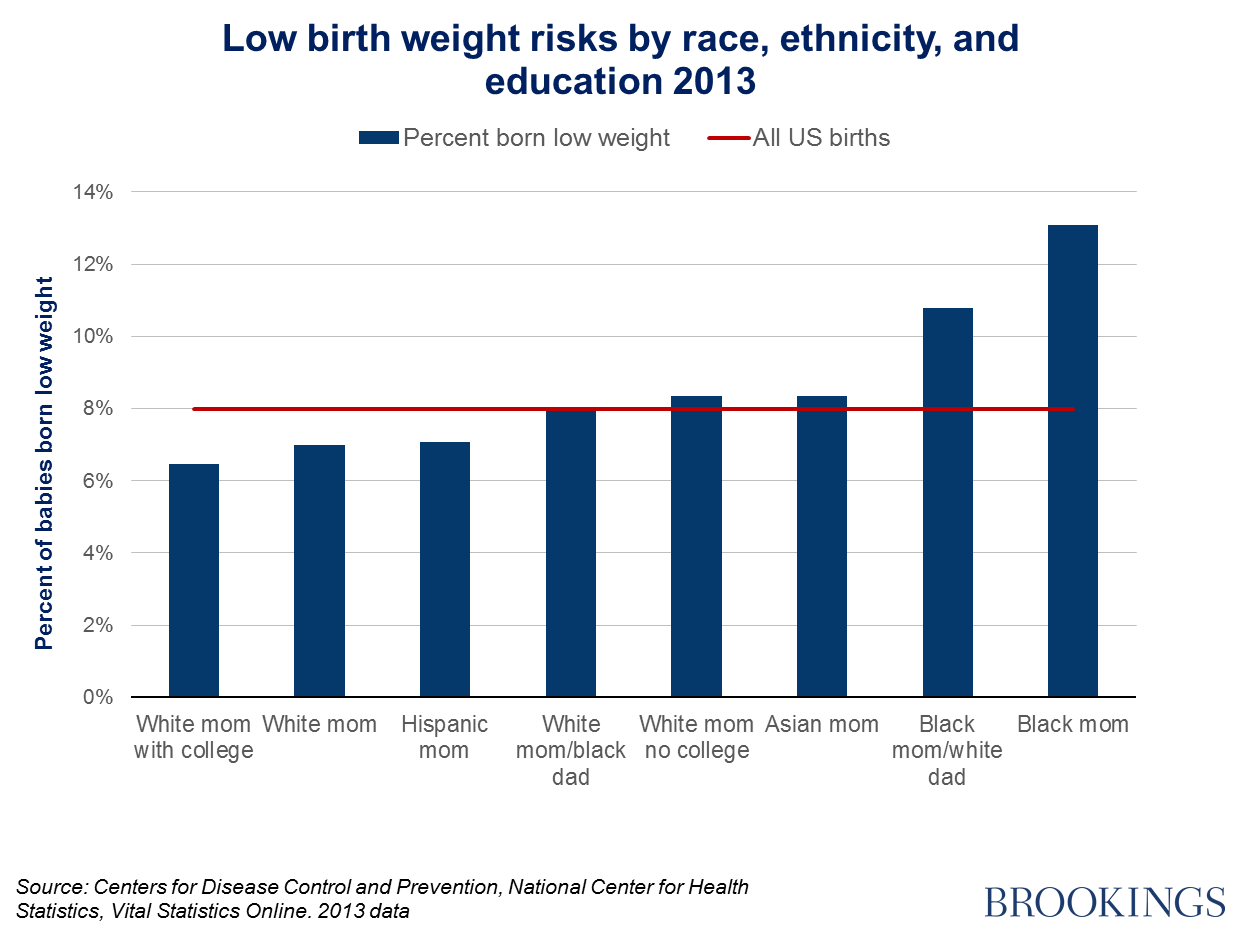 The birth weight race gap has shrunk only very slightly since 1970, and for the wrong reason. The share of black babies born at low weight has remained more or less constant, while the rates for white moms and those from other races have worsened slightly: 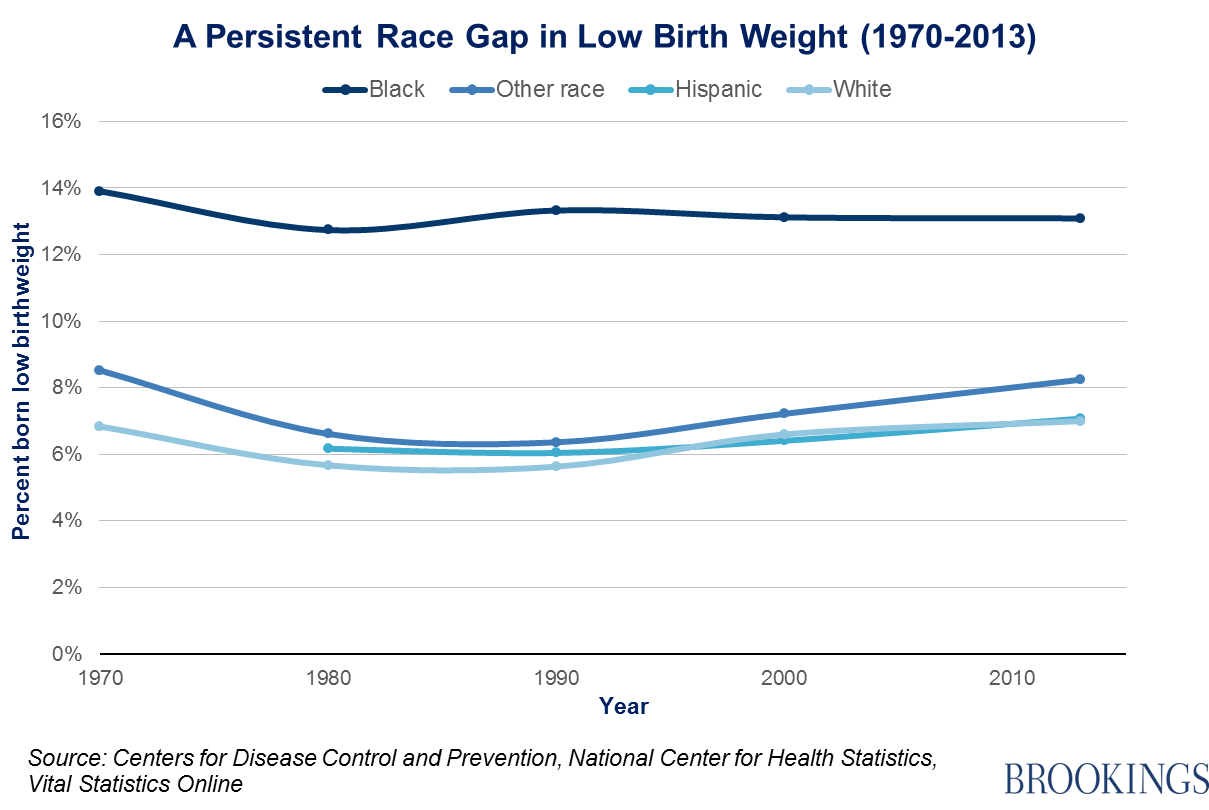 Why are race gaps in low birth weight babies so high?

Epidemiologists puzzle over the racial gaps, which are not fully or easily explained by factors measured on birth records, like maternal age, prenatal care, smoking habits, education, and weight. A number of theories have been offered, including harm caused by segregation, exposure to toxins and pollutants. For example, black children under age 5 remain twice as likely as whites to suffer from exposure to dangerous levels of lead, and segregation has confined many blacks to older and more dangerous homes.

The United States punches below its weight in the world

Compared to other countries, the United States performs poorly on birth weight, ranking 28th out of 32 OECD countries. Worldwide, the United States ranks 67th, just behind Kenya, according to data from UNESCO. Scandinavian countries and South Korea are at the top. Just 4.1 percent of Finnish babies are born at low weight, half the US rate. Indeed, the average new mother in most developed countries, including Mexico, is less likely to have a low weight baby than the average college-educated white American. 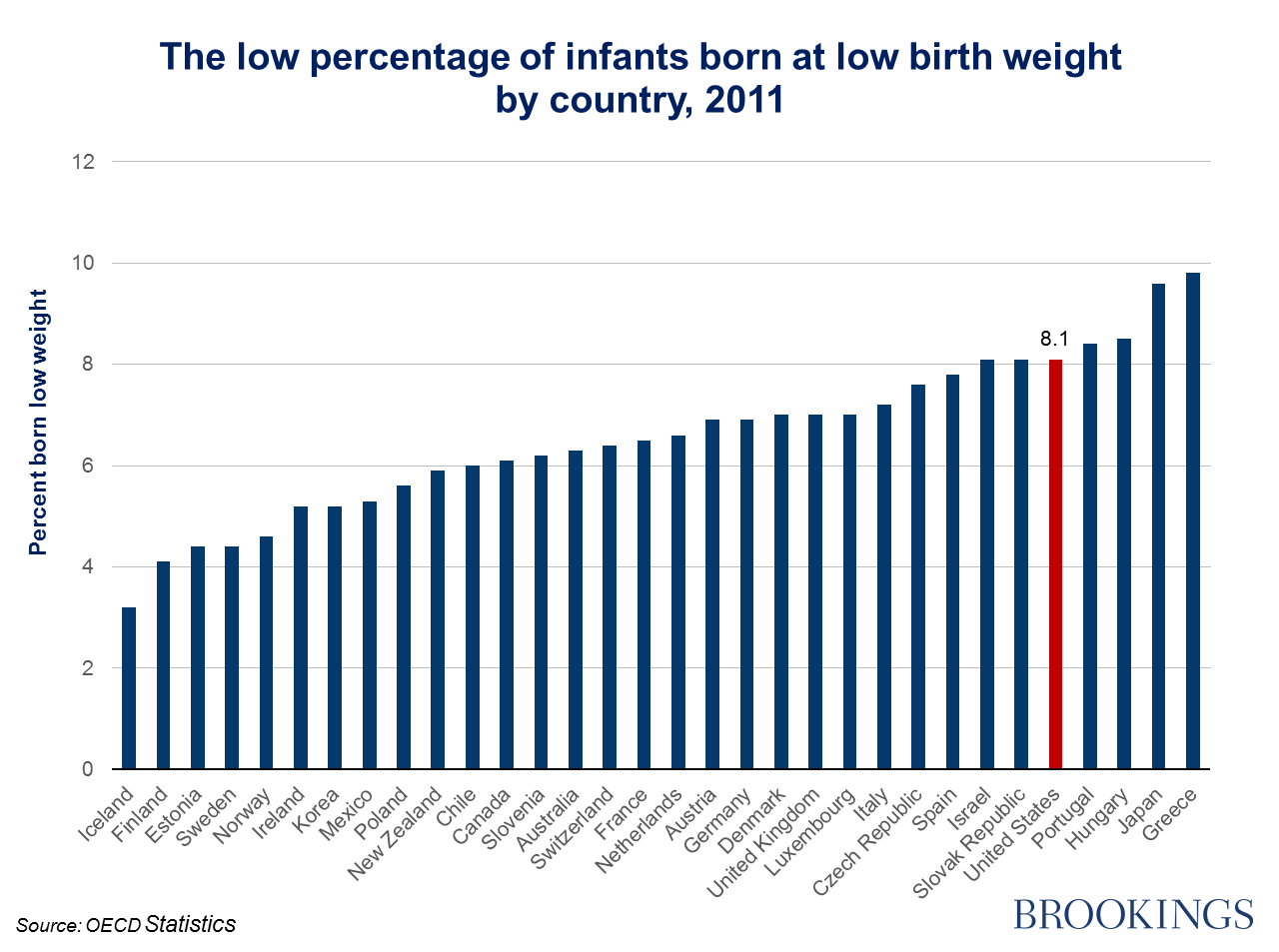 It is not clear why the United States has such a poor record on this front, and there are clearly many factors at work, including perhaps the quality of healthcare. Understanding and tackling this problem will be a vital step towards greater opportunity. A healthy birth lays the foundation for better life chances.