Gentrification – the migration of wealthier people into poorer neighborhoods – is a contentious issue in most American cities. Many fear that even if gentrification helps a city in broad terms, for instance by improving the tax base, it will be bad news for low-income residents who are hit by rising rents or even displacement. But this received wisdom is only partially true.

The Problem of Concentrated Poverty

A recent study published by City Observatory, an urban policy think-tank, and written by economist and former Brookings scholar Joseph Cortright with Dillon Mahmoudi , challenges this prevailing pessimism.  Examining population and income changes between 1970 and 2010 in the largest cities, they find that the poverty concentration, rather than gentrification, is the real problem for the urban poor.

Cortright and Mahmoudi examine more than 16,000 census tracts[1] – small, relatively stable, statistical subdivisions (smaller than the zip code), of a city – within ten miles of the central business districts of the 51 largest cities. Their key findings are: 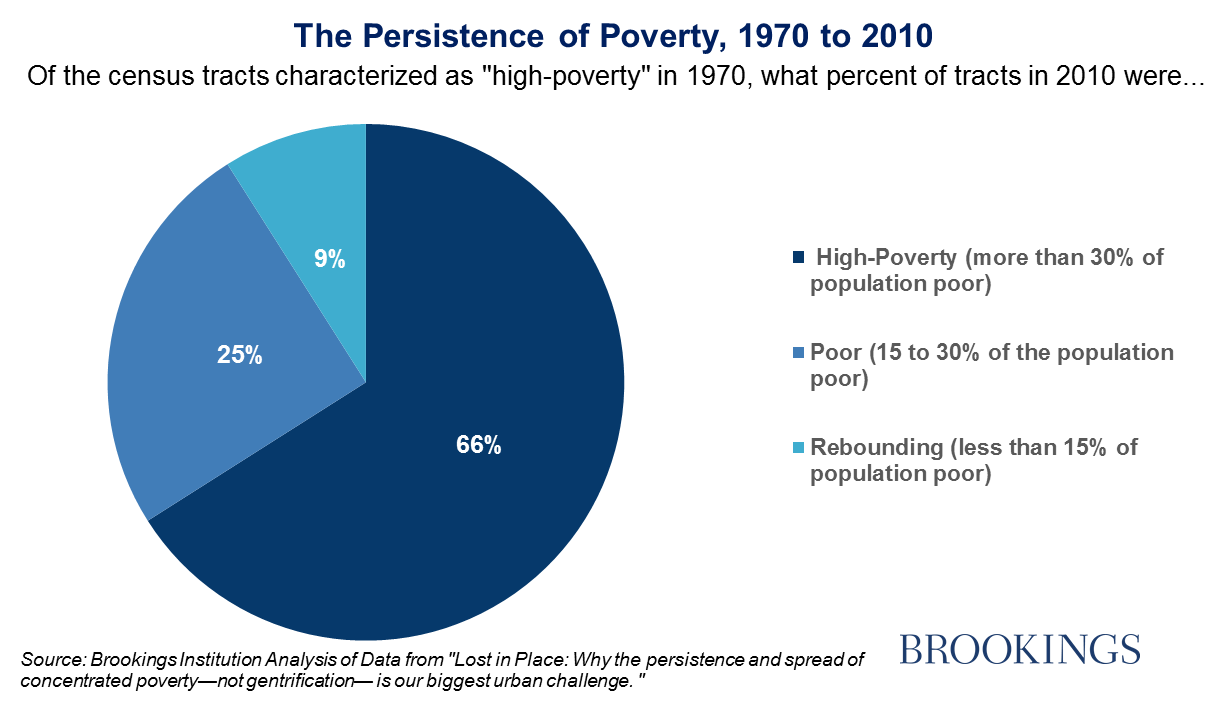 The Damage of Concentrated Poverty

Being poor is obviously bad, but being poor in a really poor neighborhood is even worse. The work of urban sociologists like Harvard’s Robert J. Sampson and New York University’s Patrick Sharkey  highlights how persistent, concentrated neighborhood disadvantage has damaging effects on children that continue throughout a lifetime, often stifling upward mobility across generations.  When a community experiences uniform and deep poverty, with most streets characterized by dilapidated housing, failing schools, teenage pregnancy and heavy unemployment, it appears to create a culture of despair that can permanently blight a young person’s future.

So what has been the impact of gentrification in the few places where it has occurred? There is some evidence, crisply summarized in a recent article by John Buntin in Slate, that it might not be all bad news in terms of poverty. A degree of gentrification can begin to break up the homogenous poverty of neighborhoods in ways that can be good for all residents. New wealthier residents may demand improvements in schools and crime control. Retail offerings and services may improve for all residents – and bring new jobs, too. Gentrifiers can change neighborhoods in ways that begin to counteract the effects of uniform, persistent poverty.  On the other hand, gentrification can hurt low-income households by disrupting the social fabric of neighborhoods and potentially “pricing out” families. It depends on how it’s done. We’ll turn to that tomorrow.

[1] The census tracts are normalized to 2010 boundaries. The authors use The Brown University Longitudinal Database.