The right to the “pursuit of happiness” is a foundation stone of the American dream. But happiness comes in different forms, which relate in varying ways to opportunity, economic progress, and inequality.

In order to fulfill this last and least studied dimension of well-being, people have to have the capacity to think beyond daily struggles and to invest in future opportunities. This capacity is not shared by all—particularly not by those who face deep poverty, poor health, and/or violent conflict.

Well-being Varies Around the World

In a new paper, Milena Nikolova and I use well-being metrics and data from the Gallup World Poll to study well-being of different kinds around the world. In the poorest societies, hedonic well-being stands out as most important to respondents, as it is the dimension they are able to achieve in the face of constant daily struggles. In contrast, respondents in wealthier societies score higher on life evaluations because they have more control over the lives that they lead. Acquiring new capabilities and opportunities can in fact be an unhappy process, from a hedonic perspective. Capabilities such as employment are positive for life evaluations, and therefore for eudaimonic well-being, but also contribute to stress and anger.

Character and Personality Matter, Too

When we examine our world-wide sample of respondents depending on where in the evaluative well-being distribution they are, we find that those at the highest levels are least concerned with income, yet value learning and creativity more than others. Full-time employment is negatively correlated with subjective well-being at the top of the distribution, while unemployment has the strongest negative correlation for the unhappiest quantile. 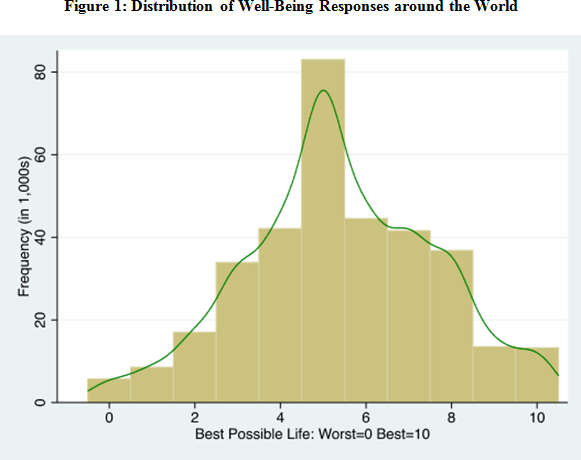 Individual character and personality traits are also an important part of the story. Traits such as positive affect (smiling), perceptions of health, freedom, and belief in hard work are the most important correlates of positive reports of purpose or meaning in life around the world. Perceptions of freedom and belief in hard work, meanwhile, are closely linked to optimism about the future.

Poverty is Stressful in the U.S.

Stress – a marker of daily struggles – is much higher among the U.S. poor than among the Latin American poor. Beliefs in hard work, meanwhile, are much less equally shared across the rich and the poor in the U.S. than in Latin America. Disadvantaged individuals consumed with daily stress/struggles and lacking faith in the future may simply find well-being in the daily, Benthamite sense, as the poor in many poor countries do. But that is not the kind of happiness Jefferson meant us to pursue. Active, purposeful lives are happy ones: but these are hard, right now, for many Americans to pursue.