Note: This piece is the third in a series of blog posts on Isabel Sawhill’s new book

Generation Unbound: Drifting into Sex and Parenthood without Marriage

. To read the previous pieces:


Many young adults are drifting into relationships and into childbearing without marriage. Is this trend benign? Most experts think not. In the debate over these questions, people tend to fall into one of two camps: the “traditionalists” or the “village builders.”

The Traditionalists: Bring Back Marriage

The traditionalists are deeply concerned about the growing fractures in family life and believe the solution is to bring back marriage. This view is perhaps best exemplified by a quote from Republican Senator Marco Rubio “the greatest tool to lift children and families from poverty is one that decreases the probability of child poverty by 82 percent. But it isn’t a government spending program. It’s called marriage.”

Unfortunately, policies intended to bring back marriage have not been very effective. As my colleague Ron Haskins has written elsewhere, rigorous evaluations of the marriage education programs of the 2000s show little or no effect of these policy interventions on family stability and marriage rates.

Village Builders are resigned to the new reality of declining marriage rates and think that the best response is to provide single parent families with more assistance in the difficult job of raising children on their own — more child care, health care, earnings supplements or a higher minimum wage, for example.

I am in favor of these programs and wish we were doing more as I have argued elsewhere. Still, these programs can get to be very expensive, especially those that provide direct assistance rather than the tools that move people toward greater self-sufficiency. For this reason I tend to favor investing in proven programs that improve children’s life chances which could end up saving money over the longer run.  In the meantime, one-third of all children now live in single parent families and child poverty rates in single parent families are four times as high as in married parent families. And for every child removed from poverty by a social program, another one is entering poverty because of the breakdown of the family. The growth in single parent families since the 1970s has caused child poverty to rise by roughly 5 percentage points as much as the poverty-reducing effect of some of our biggest safety net programs, such as Food Stamps. (Food Stamps costs over $80 billion annually and reduces the child poverty rate by about 3 percentage points.) 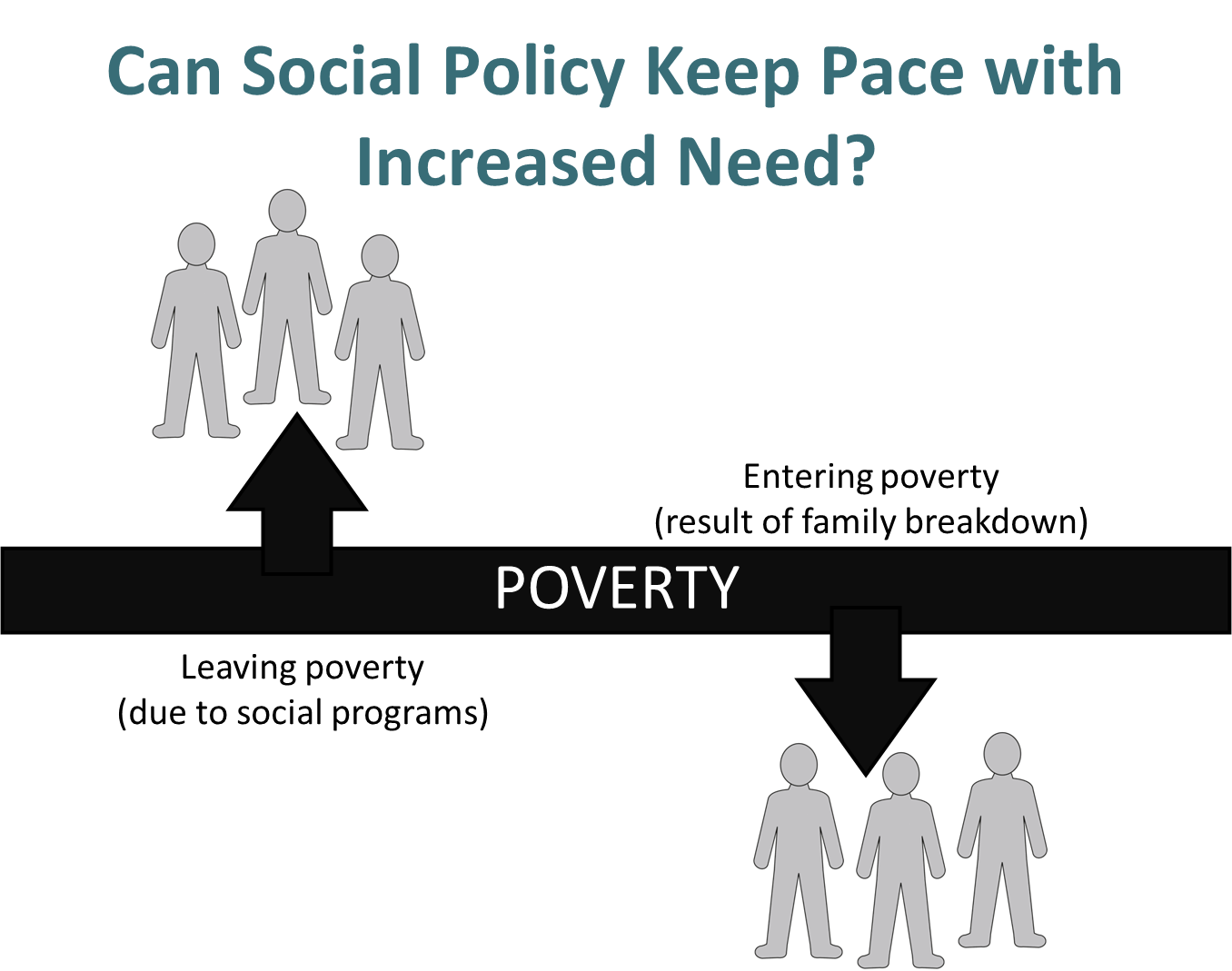 A Third Option: Changing the Default

The question, in the end, is how far we should go as a society in taking collective responsibility for the raising of children. Although I do not disagree entirely with either the traditionalists or the village builders, the evidence does not make me optimistic that either approach will re-stabilize families in ways that improve children’s prospects any time soon. The institution of marriage is on the decline – not just in the United States but in most advanced countries—and I doubt that our current policy “solutions” will be enough to bring marriage back. In Monday’s blog post, I will describe a third solution to changing dynamics: changing the default from childbearing by chance to childbearing by design.