This is shaping up to be the decade of protest. From Chile and Brazil to Turkey, Thailand, and Venezuela, riots have broken out and even – as in Ukraine – broken governments. Each protest has its own character, of course: but there are striking similarities among them – and, in particular, among the people participating in them.

The Protestors Are Pessimistic, Not Poor

For one thing, the protests are being led by relatively wealthy people in relatively wealthy countries. The “prototypical” protestor is not a nothing-to-lose risk taker, but middle-aged, middle income, and more educated than the average, falling into the outdated category of “middle class”. He or she has, for the most part, made significant investments in the socio-economic system that she lives in, and yet is pessimistic about opportunities for the future within it. In fact, the protestors look a lot like the upwardly mobile but unhappy “frustrated achievers” around the world we have been tracking for years.

A Story of Seven Protests

From our analysis of the Gallup World Poll, and using the metrics provided by the new “science” of well-being, we can see that the cohorts most likely to be participating in the Arab Spring protests had average income, education, and life satisfaction levels, but had very pessimistic assessments of their future well-being. In Brazil, stress has been increasing in recent years for all respondents, but the most for those in the middle income quintiles and for those in the 25-45 age range. We also find that those with college education are much less likely to believe that hard work gets you ahead. Thailand and Ukraine exhibit the same pattern consistently: the most educated are less likely to believe in success through hard work, and stress levels are the highest in the middle income and middle age cohorts. 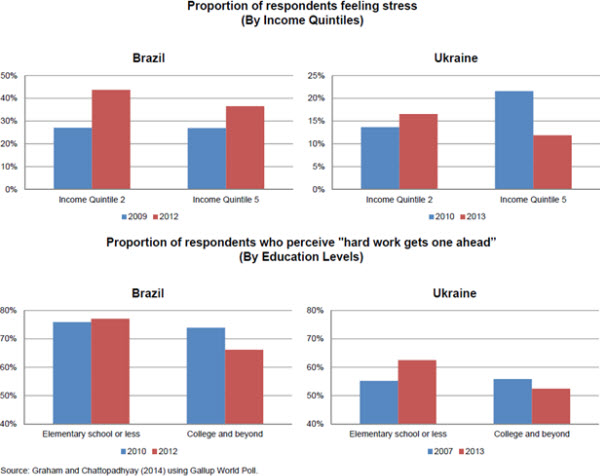 The New Global Challenge: Frustration With Lack of Mobility

The global community has made great strides in reducing absolute poverty in the past two decades. But many countries now house an increasingly frustrated middle class (frustration which many U.S. citizens also share). Left unaddressed, festering public resentment can create as much economic and political turmoil as mismanaged macroeconomic policies can do – including in countries which are performing well economically. A paradox of progress, perhaps: but one that has to be addressed.