The national pledges for climate action of 127 countries, also known as Intended Nationally Determined Contributions (INDCs), announced before COP21 have been sparking debate on their potential for success in the global goal of holding future temperature increases to a 2 degrees Celsius target. At the moment, the world is already on a path well beyond that target, almost an entire degree beyond that target. Given the close relationship between energy consumption and climate change, interventions in energy might be able to keep the world on the 2 degrees Celsius path. 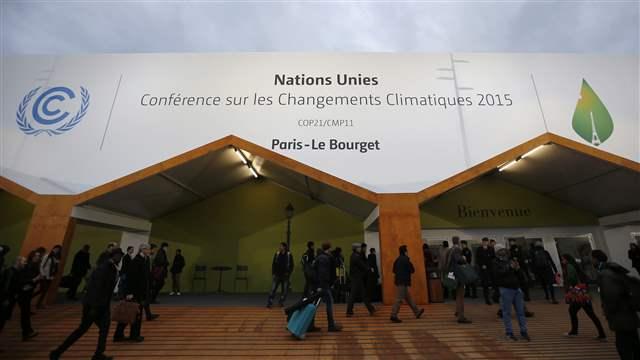 Participants are pictured in front of the entrance at the venue for the World Climate Change Conference 2015 (COP21) at Le Bourget, near Paris, France (REUTERS/Stephane Mahe).

With energy consumption projected only to rise over the next 15 years, Brookings Senior Fellow Charles Ebinger, in a new brief, examines whether richer countries will agree to assist poorer ones in developing renewable energy sources as a way to avoid the globally harmful temperature increases that will result from the use of cheaper, nonrenewable fossil fuel energy stocks.

Ebinger outlines some key questions that may be left unresolved in Paris but will need to be addressed. On particular issue is whether the OECD will be willing to “finance the transition to a carbon-free society for the rest of the world.” He also ponders the current projections for the world’s demand for liquid fuels (to rise by 19 million barrels per day), wondering in particular where this oil will come from. Another critical question he raises is whether and how alternative energy sources and other technologies could help cut these projections, given the massive investments they require.

The projected growth in fossil fuel consumption in the emerging markets of the world raises the critical question of how we deal with these market realities and also the emerging global consensus that we must act to address climate change.

While Ebinger believes that the “euphoria going into Paris is commendable,” he warns that “we as a global society [should] make a somber assessment of what technologies are scalable, and we keep as diversified an energy portfolio as possible.”

, and some of the key questions on the global energy environment following Paris.