See the accompanying interactive feature, County Water Use Map, to compare water use for irrigation, thermoelectric, total domestic, and domestic per capita by state and county.

A serious drought in the American West has called national attention to our country’s water resources. U.S. businesses report substantial concerns over water supply, while the current drought in California has cost the state billions of dollars in economic losses. Not all regions of the United States, however, have the same water needs. Understanding how our nation uses water, and how these needs vary across the country, will be an important piece of the solution to the water puzzle. Using newly released data, The Hamilton Project presents an economic analysis and accompanying interactive feature to illustrate the great variation in the level and nature of water use across the country.

Our nation relies on water for a wide variety of purposes, from power generation to irrigation to drinking water and other household uses. A host of commercial industries would struggle to function without ready access to water, including manufacturing, oil and gas extraction, and utilities; even data processing and data hosting depend on water. All told, Americans withdraw more than 1,000 gallons of water per person every day—putting our nation’s per capita water withdrawals among the highest in the world.

Not all of this water is consumed or used up, however. Water scientists distinguish between water withdrawals (water diverted from a source, such as an aquifer, river, or ocean) and water consumption (water that evaporates, is incorporated into crops, is used as drinking water, or is otherwise removed from the source). Withdrawn water can be either fresh or saline, although the latter is typically employed for power generation.

Most of America’s water withdrawals, in fact, go to power generation and irrigation. About 45 percent of all withdrawn water is used for power generation alone, both to operate steam-driven turbines and to provide cooling. Another 33 percent of withdrawn water is used for irrigation of farmland and recreational areas such as parks and golf courses. The remaining 22 percent of water withdrawals is roughly evenly split between water from public-supply systems—the piped water that is used domestically in households as well as in most commercial businesses—and self-supplied water, typically from wells, that is used for a variety of purposes.

Although power generation and irrigation account for most water withdrawals for the country as a whole, not all regions of the United States withdraw water in the same proportions. For example, relatively few counties have power plants, but those that do withdraw a very large amount of water for their operation and cooling. In addition, regions that tend to rely on hydroelectric power, such as the Northwest, typically have low levels of withdrawals for power generation since hydroelectric power relies on water that is not withdrawn from the source (and is thus not classified as a withdrawal by the U.S. Geological Survey). As a consequence, America’s water withdrawals for power generation are fairly concentrated geographically.

For both irrigation and power generation, it is important to note that the final good—food and electricity, respectively—is often consumed far from the place of the water withdrawal. That is, power generated in one county can often be transported across county lines, while food produced in a particular state can be shipped to other states or even abroad for foreign consumption.

As shown in figure 1, counties withdrawing a large amount of water for power generation—colored with darker shades of orange—are speckled across the Midwest and East, especially along the Northeast’s coastline, but also along the coast of southern California. Nationally, roughly one fifth of counties have large withdrawals for power generation—more than 100,000 gallons per day—while the remaining four fifths have close to zero or none. 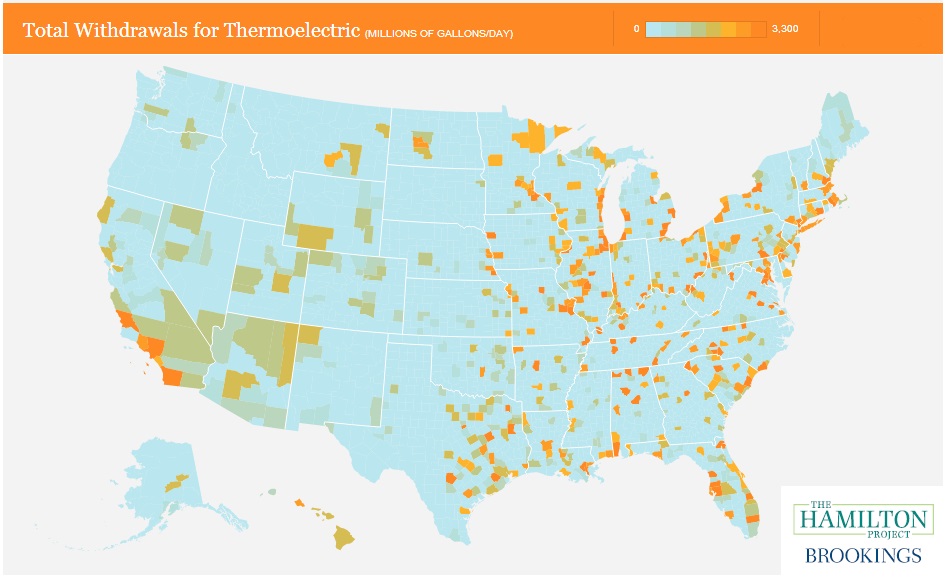 By contrast, water withdrawn for irrigation is more widespread across the United States, although here too there is regional variation, as shown in figure 2. Not all counties have croplands, and not all croplands require large amounts of withdrawn water (for example, agriculture in dry regions withdraws more water than agriculture in high-rainfall regions). The colors in figures 2 through 4 correspond to quantiles, with an equal number of counties in figure 2, and states in figures 3 and 4, falling into each of the eight color categories. In figure 2, the dark green shaded counties have the highest amount of water withdrawals for irrigation, and the lighter shaded counties have lower amounts, down to light blue, which reflects the least amount of water withdrawals for irrigation. As can be readily seen, much of the United States west of the Missouri River withdraws a substantial amount of water for irrigation. Irrigation withdrawals are also high in Florida and in counties close to the Mississippi River.

Figure 2 effectively captures variation across the bottom and middle of the distribution, but masks substantial variation at the top. Across the country, a relatively small number of counties reliant on agriculture dominate water withdrawals for irrigation: 85 percent of withdrawals for irrigation go to just the top 10 percent of counties, with the most irrigation-intensive counties withdrawing more than one billion gallons of water per day. County-specific rates can readily be explored with the new Hamilton Project interactive maps. 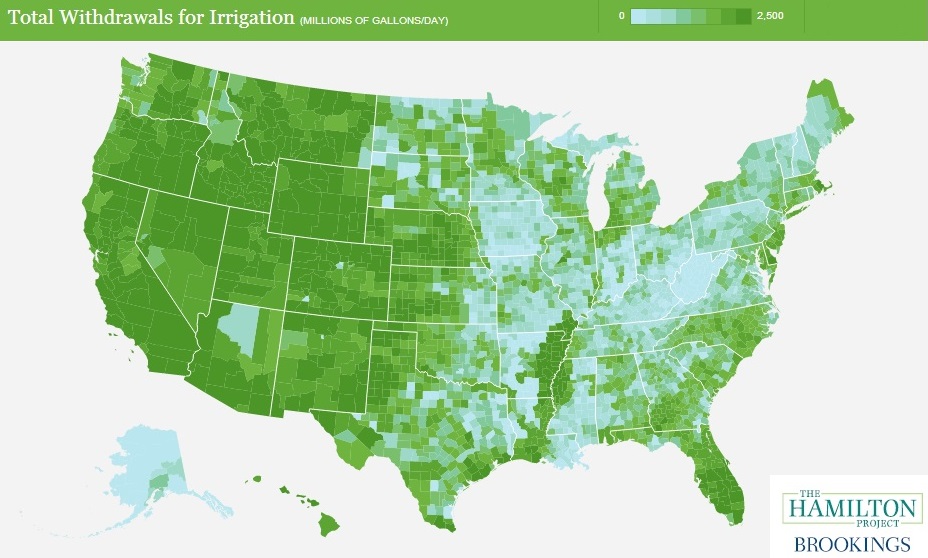 Figure 3: Total Withdrawals for Domestic Use 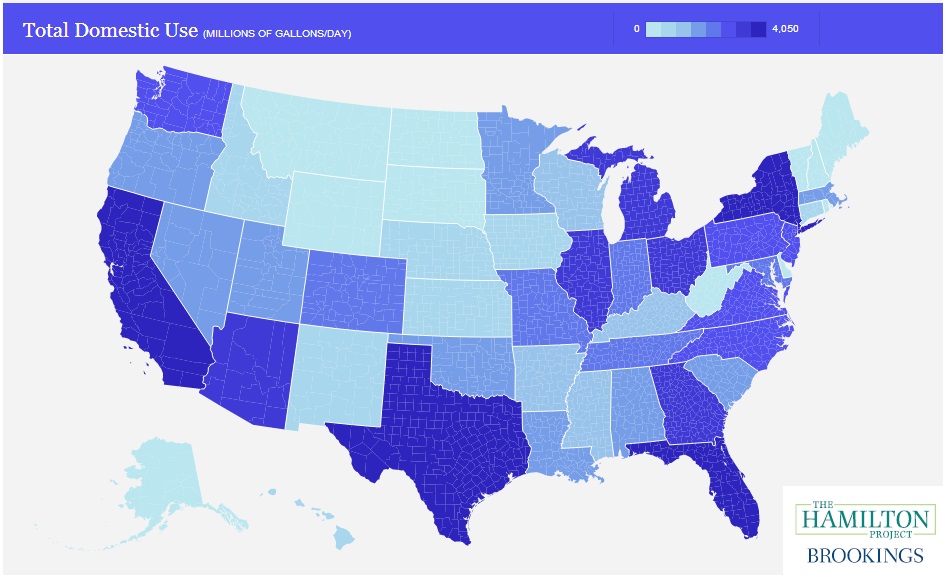 These disparities can largely be attributed to landscaping; residents of drier states withdraw more water to maintain their lawns than do people in states with higher levels of rainfall. Indeed, domestic water use in the arid West is far higher than in most of the Midwest and East. Infrastructure also explains part of the variation. Old or damaged water pipes leak, which can unnecessarily increase domestic water use—nationally roughly 14 percent of treated water is lost due to leakage. Unlike withdrawals for irrigation and power generation, domestic water is generally consumed where it is withdrawn.

Figure 4: Withdrawals for Domestic Use per Capita 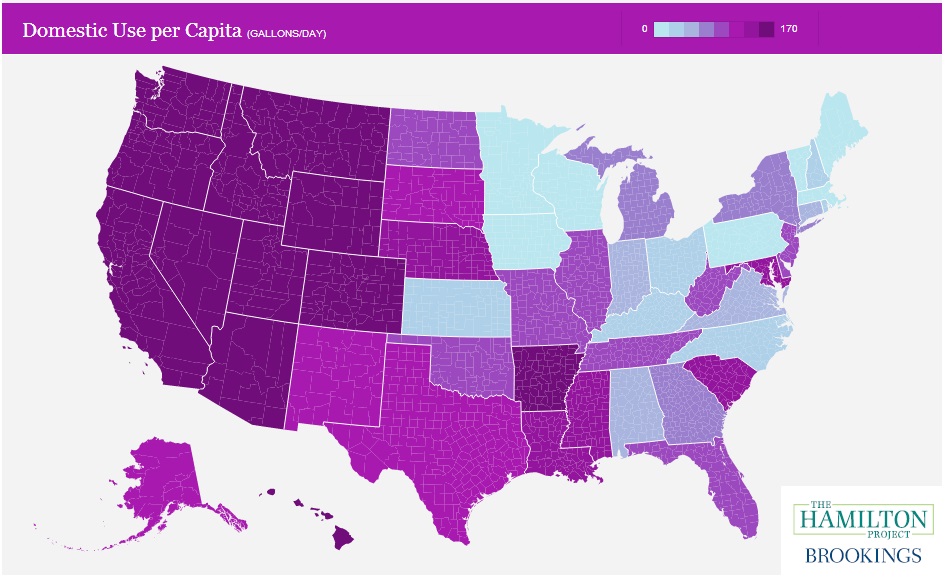 Water withdrawals vary substantially across the country. Counties that depend on irrigated water to support agriculture tend to withdraw large amounts of water, while those that house our nation’s power plants are similarly some of the largest withdrawers. These uses account for significant variation in local dependence on water. Moreover, differences in the amount of water used for landscaping, combined with diverse local water infrastructures, account for important countrywide variation in domestic water use.

This geographic variation underscores both the complexity of America’s water challenges and the importance of a diverse set of policy reforms. As America’s water challenge intensifies, a host of strategies—such as conservation, innovation and investment in infrastructure, and reforms to encourage water trading and more efficient pricing—should all be on the table. The policy appeal and political constraints of the various options will likely vary with the characteristics and needs of the local economy.