As Israel seeks to initiate plans for annexation, Congress will have to respond. A new poll offers insights into American views on the Israeli-U.S. relationship and how opinions may be changing, writes Shibley Telhami. This piece originally appeared in The Washington Post.

The American Israel Public Affairs Committee, AIPAC, reportedly told U.S. lawmakers last week they’re “free to criticize Israel’s looming annexation plans — just as long as the criticism stops there.” Why would AIPAC send such a message about the controversial annexation of Jewish settlements in the occupied West Bank — and what does it say about the changing public conversation about the U.S. relationship with Israel?

This could be a preemptive AIPAC move, to avoid looking weak should Congress start to criticize Israel’s annexation plans, as some members have already done. The partisan divide between Democrats and Republicans on Israel policy has expanded in recent years. New House members since the 2018 midterm election have been more openly critical of Israeli policy, while counter-voices in Congress have argued that “questioning support for the U.S.-Israel relationship is unacceptable.”

But Israel will likely reveal its annexation plan as early as July 1, leaving few options for U.S. politicians to sit on the fence. Do Americans think that questioning the American relationship with Israel is unacceptable? Our recent University of Maryland Critical Issues Poll asked this important question.

Here’s what we found: 67 percent of respondents in our survey said either that it is “acceptable” to question the Israeli-American relationship, or that it’s the “duty” of members of Congress to do so. Among Democrats, that number was an overwhelming 81 percent, but a majority of Republicans also agreed. What does this mean?

Here’s how we conducted this survey

Our March 12-20 online survey polled a nationally representative sample of 2,395 respondents. We asked: “In the midterm election, several members of the House of Representatives were elected who have been vocally critical of Israeli government policies and of American support for Israel. Regardless of whether you agree or disagree with their specific criticism, or whether or not you back American support for Israel, tell me which of the following is closer to your view?” Participants picked one of four randomized responses.

So the net result is that 28 percent of Americans feel that it’s unacceptable to question the U.S.-Israeli relationship or that members of Congress have a duty as members to defend the relationship. That’s a strikingly small number, given the historic reluctance of Congress to voice criticism of Israeli policies, and “for decades, it was seen as too politically risky” for members to raise questions about the Israeli-American relationship.

This suggests two-thirds of Americans, including majorities of Democrats, Republicans and independents, say it’s either “acceptable” or even the “duty” of members of Congress to question the relationship. Since our polls have not probed this question in prior years, we don’t have an accurate way to measure how U.S. attitudes may have changed over time. But given the increased polarization of views on issues related to Israel, it’s striking that majorities across the partisan divide now appear open to questioning the Israeli-American relationship. 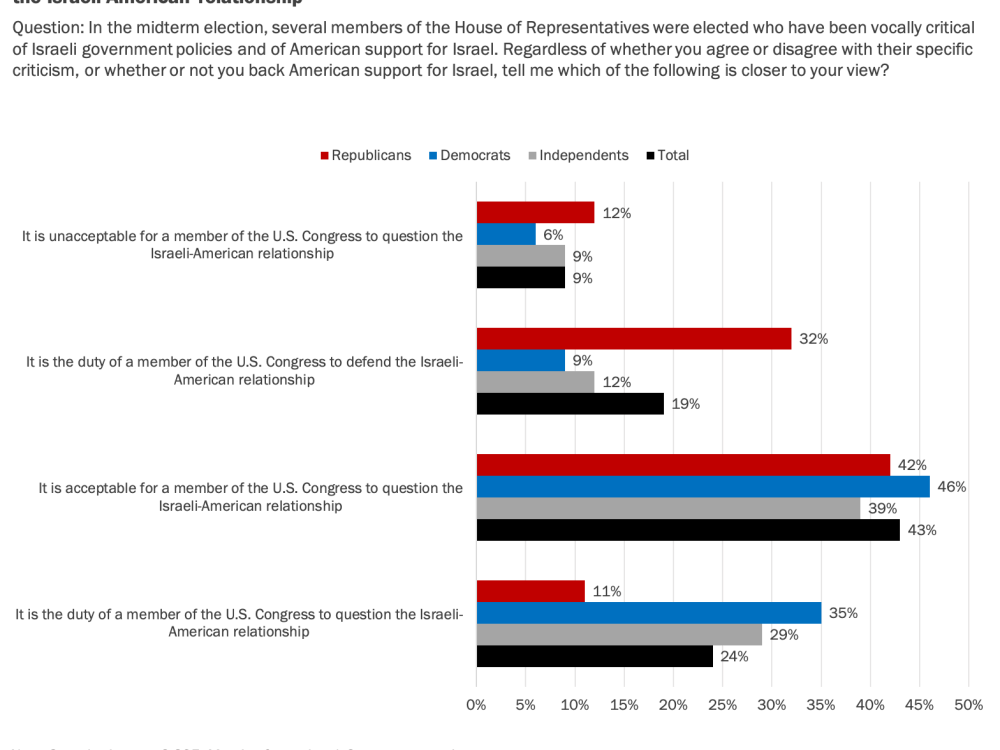 On many issues, including Israel, political lobbying and campaign contributions frequently don’t reflect public opinion. Of course, public opinion is always a factor in democratic politics, but the opinion of the “issue public” — or those segments of the public who rank an issue high in their priorities — matters most. Americans have indicated their desire for neutrality in U.S. diplomacy toward the Israeli-Palestinian conflict — but those who ranked this issue high in their priorities generally tended to favor Israel’s position more.

Those differences with the overall survey findings do not suggest that the issue public is interested in stifling debate on Israel’s policies. The survey findings generally align with previous polls showing that Israeli-Palestinian tensions had become part of the intensifying values struggle in America, with Israel increasingly sitting outside the Democrats’ values universe.

Democratic constituents, especially, seem to embrace openness, even desire, to question the Israeli-American relationship. Presidential candidates appeared to reflect this public sentiment during the Democratic primaries: Sen. Bernie Sanders suggested using aid to Israel as a lever to influence Israeli government policy. Joe Biden opposed linking aid to Israel with protests over Israeli policies, but gave a clear criticism of Israeli Prime Minister Benjamin Netanyahu, saying, “Bibi Netanyahu and I know one another well. He knows that I think what he’s doing is outrageous.”

It’s not likely that the Israeli-American relationship will be high on the overall priorities of U.S. voters, as November’s elections may be more about identity and partisanship. But the partisan divide on Israel could emerge as a tempting line of attack for Republicans, especially if Israel policy enters the political conversation at the upcoming Democratic Convention. This poll’s findings suggest that attacks on the legitimacy of criticizing Israel may fall flat — if not be helpful to Democratic candidates.

Reforming the Authorizations for Use of Military Force

Wednesday, May 11, 2022
Get daily updates from Brookings