The much-awaited rulings of the Permanent Court of Arbitration in The Hague—in response to the Philippines’ 2013 submission over the maritime entitlements and status of features encompassed in China’s expansive South China Sea claims—were released this morning. Taken together, the rulings were clear, crisp, comprehensive, and nothing short of a categorical rejection of Chinese claims.

Among other things, the court ruled China’s nine-dash line claim to the South China Sea invalid because of Beijing’s earlier ratification of the United Nations Convention on the Law of the Sea (UNCLOS). In a move that surprised many observers, the court also ventured a ruling on the status of every feature in the Spratly Islands, clarifying that none of them were islands and hence do not generate an exclusive economic zone (EEZ). Significantly, it ruled that Mischief Reef, which China has occupied since 1995, and Second Thomas Shoal, where China has blockaded Philippine marines garrisoned on an old vessel that was deliberately run aground there, to be within the EEZ of the Philippines. 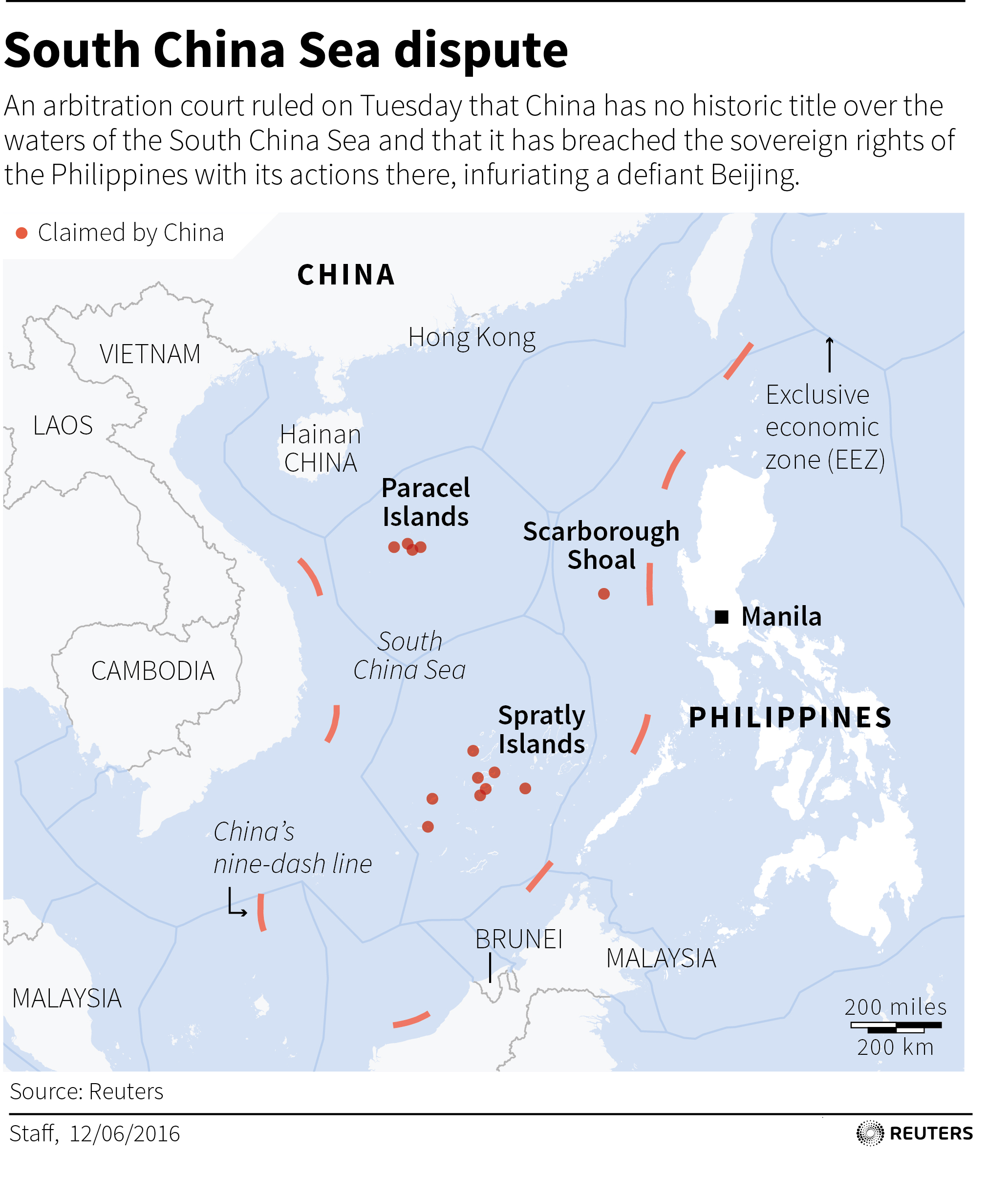 Now that the rulings have been made, what are the implications and way forward for concerned states?

For the Philippines, the legal victory presents a paradoxical challenge for the new government. Prior to the ruling, newly-elected President Rodrigo Duterte indicated on several occasions that he was prepared to depart from his predecessor’s more hardline position on the South China Sea to engage Beijing in dialogue and possibly even joint development. He even hinted that he would tone down Manila’s claim in exchange for infrastructure investment. Given that the ruling decisively turns things in Manila’s favor, it remains to be seen whether the populist Duterte administration would be able to sell the idea of joint development of what are effectively Philippine resources without risking a popular backlash. This will be difficult but not necessarily impossible, given that the Philippines would likely still require logistical and infrastructural support of some form or other for such development projects.

Since the submission of the Philippine case in 2013, China has taken the position of “no recognition, no participation, no acceptance, and no execution,” as described by Chinese professor Shen Dingli. Beijing continues to adhere to this position, and is likely to dig in its heels given the comprehensive nature of the court’s rejection of China’s claims. This, in turn, will feed the conspiracy theories swirling around Beijing that the court is nothing but a conspiracy against China.

[T]he rulings are likely to occasion intense internal discussions and debates within the Chinese leadership as to how best to proceed.

Not surprisingly, in defiance of the ruling, China continues to insist on straight baselines and EEZs in the Spratlys. Away from the glare of the media however, the rulings are likely to occasion intense internal discussions and debates within the Chinese leadership as to how best to proceed. Many analysts have the not-unfounded concern that hawkish perspectives will prevail in this debate, at least in the short term—fed by the deep sensibilities to issues of security and sovereignty, and a (misplaced) sense of injustice. This would doubtless put regional stability at risk. Instead, China should do its part to bring the Code of Conduct it has been discussing with ASEAN to a conclusion as a demonstration of its commitment to regional order and stability, and the peaceful settlement of disputes. Beijing should also continue to engage concerned states in dialogue, but these dialogues cannot be conducted on the premise of Chinese “unalienable ownership” of and “legitimate entitlements” in the South China Sea.

ASEAN will be hosting several ministerial meetings later this month, and the ruling will doubtless be raised in some form or other, certainly in closed-door discussions. For ASEAN, the key question is whether the organization can and will cobble together a coherent, consensus position in response to the ruling, and how substantive the response will be (they should at least make mention of the importance of international law to which all ASEAN states subscribe). For now though, it is too early to tell.

As an Asia-Pacific country, the United States has set great stock in the principle of freedom of navigation, and has articulated this as a national interest with regards to the South China Sea. There are however, three challenges for the United States as it proceeds to refine its policy in the region:

The world needs a pandemic plan B

Thomas Wright
The Atlantic Monday, September 13, 2021
On The Record

Adversaries or competitors: A conversation on US-China relations