Editors’ Note: Although the South China Sea is a source of potential instability for the Asian region, writes Joseph Liow, disputes there also offer an opportunity for greater cooperation between the United States and India in contributing to the management of regional order. This post is excerpted from a new Brookings India briefing book titled “India-U.S. Relations in Transition.”

While a source of potential instability for the Asian region, the South China Sea disputes also offer an opportunity for greater cooperation between the United States and India in contributing to the management of regional order. 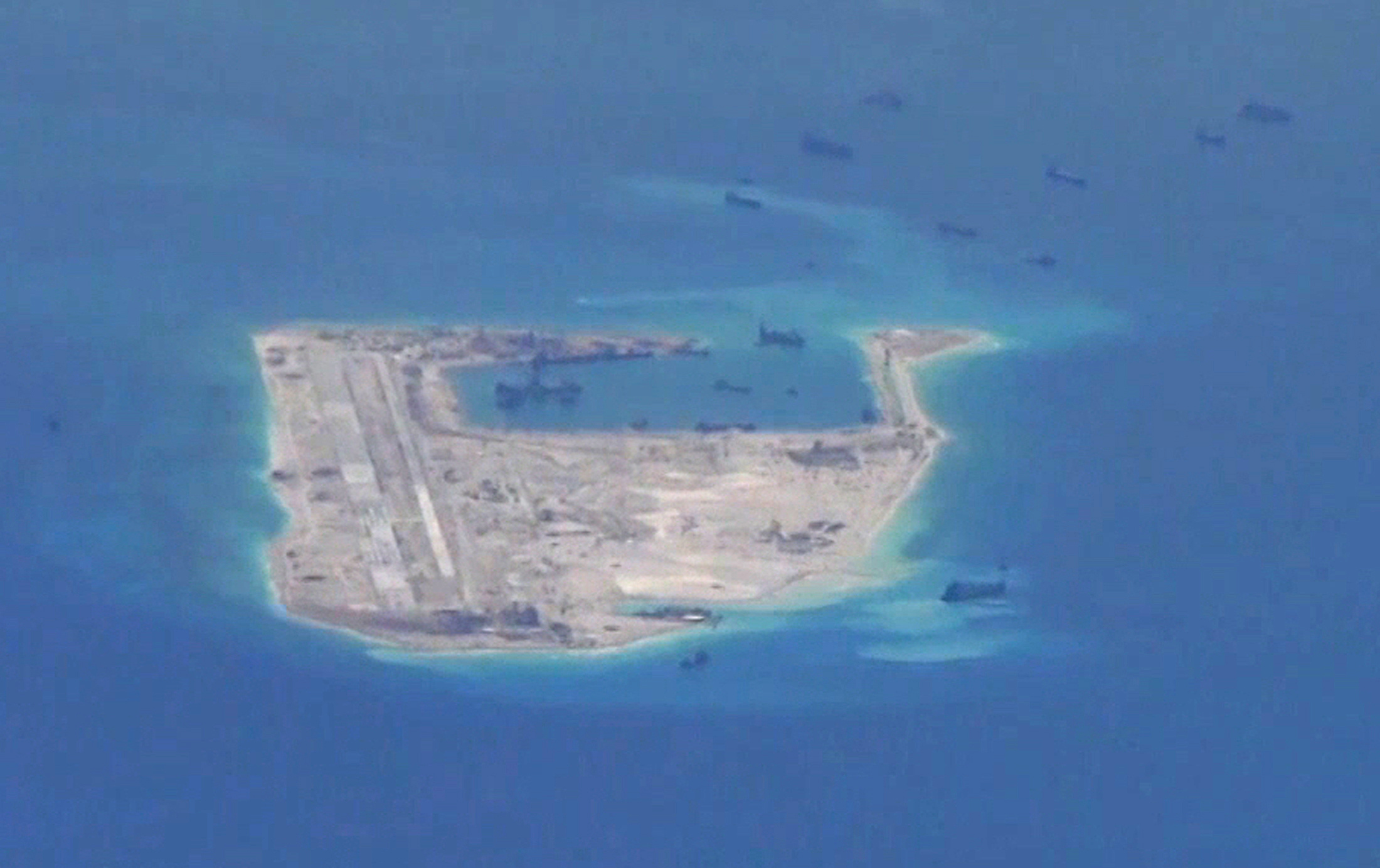 Chinese dredging vessels are purportedly seen in the waters around Fiery Cross Reef in the disputed Spratly Islands in the South China Sea in this still image from video taken by a P-8A Poseidon surveillance aircraft provided by the United States Navy May 21, 2015. Photo credit: U.S. Navy, via Reuters.

While the South China Sea is a matter of national interest for the United States, its explicit interest is freedom of navigation and unimpeded commerce. Both of these are things China has guaranteed although, granted, both parties have still to arrive at agreement as to acceptable military activities under the rubric of freedom of navigation, especially in the South China Sea. Commerce however, has little if anything to do with the concerns that both parties have. Underlying their differences on this matter is their competing interpretations of the United Nations Convention on the Law of the Sea (UNCLOS) in relation to military activities within a state’s exclusive economic zone (EEZ). Whereas Washington has taken the position—despite not having ratified UNCLOS—that military activities in EEZs are permitted under the Convention, Beijing has opposed this.

India views the South China Sea as a secondary sphere of influence, the most important sphere being South Asia and the broader Bay of Bengal area. It also realizes that it does not have the naval capability to stake any kind of claim as a significant military power in the South China Sea. Increasing tensions in the South China Sea, however, are viewed as affording India certain benefits. First, China’s assertiveness in the South China Sea belies China’s “peaceful rise” narrative within Southeast Asia and this raises India’s value as a strategic counterweight to China amongst both Southeast Asian states and the United States (as well as Japan, by proxy). Second, and related to the previous point, this allows India to exert some amount of strategic pressure on China in response to the latter’s drive to bolster its strategic reach into the Bay of Bengal and the wider Indian Ocean region. In a nutshell, India considers the Indian Ocean region, and the Bay of Bengal specifically, as its sphere of influence. China’s challenge to this Indian dominance has led India to make references to the South China Sea in joint statements with the United States and with several claimant and non-claimant ASEAN states. India views this as a low-cost and useful tit-for-tat strategy thus far.

India’s relationship with Vietnam implicates India, to some extent, directly in the South China Sea dispute. India’s state-owned ONGC started a joint oil exploration project in 1988 in Vietnam’s territorial waters in the South China Sea. For a long time, China did not make any significant reference to this joint project. However, from the early 2000’s China has objected to India’s role in this venture. India has responded in two ways. First, it has asserted the right of its state-owned enterprise to carry out this venture as part of India’s legitimate economic interests. Second, it has begun to sell patrol boats to Vietnam in order to bolster the latter’s coast guard capability. India’s warships have also made port calls to Vietnam and defended its right to do so. India has asserted that it will use its navy to defend installations related to this venture in the eventuality that these come under any threat. The Indian perception is that China will not risk an open confrontation.

The United States and India can take several steps to stabilize the South China Sea situation:

• The United States should regularly reassure regional states of its commitment to the region. This is crucial because of prevailing anxieties in many Southeast Asian states that the United States may not be able to sustain the attention it accorded to the region under the rubric of the “pivot.” Moreover, regional states are also fearful of a U.S.-China condominium in which the United States might be prepared to compromise Southeast Asian interests in exchange for Chinese compromise on a broad range of global issues that could conceivably involve global trade and finance, nuclear proliferation, and North Korea. The United States should bear such concerns in mind.

• For some time, India has consistently stated that the South China Sea dispute should be settled peacefully through negotiation. In April 2016, India, Russia and China released a joint statement which asserted that “all related disputes should be addressed through negotiations and agreements between the parties concerned.” This was seen as a slight departure from the earlier Indian position and closer to the Chinese position against internationalization of the dispute. This interpretation has been disputed by India and they have re-asserted that their position is that the dispute should be resolved peacefully via a mechanism agreed to between the claimant states, which potentially allows ASEAN and the United States a role in managing the dispute.

• Both India and the United States can work together to build coast guard capabilities of claimant states, particularly Vietnam, to deal more effectively against non-traditional threats like piracy and terrorism.