When Chinese President Xi Jinping first proposed that China and Central Asia build a New Silk Road to boost economic cooperation—in a speech in Astana, Kazakhstan in 2013—analysts said: “China is making a pretty bold move.” Bold indeed. The project, now called the “One Belt, One Road” initiative, has gained considerable steam. Last month, Astana was host to the inaugural meeting of the Astana Club—a platform for private dialogue among policy analysts, business figures, and political leaders about issues in Central Asia. Not surprisingly, the Chinese initiative topped the agenda.

The meeting, which we attended, revealed new dynamics of great-power politics in Central Asia. On one side is a self-confident and calm China; on the other, an aggressive but weary Russia. While China is seeking to play a new role in the international order (and is marshaling extensive resources to do so), Russia appears to be at somewhat of a loss. Both countries are part of the Shanghai Cooperation Organization, a platform for Central Asian countries, China and Russia to discuss common interests. It is also a place where Russia can enjoy Chinese company in challenging the West over constructing a new international order.

Yet Chinese overtures to thinly populated but vast Central Asian countries raise deep Russian insecurities over its traditional grip on the region. Kazakhstan, as the largest and wealthiest in per capita terms of these countries, is especially keen to benefit from the Chinese initiative. Its leaders recognize that the outcome of this new great power game is not obvious—rather, it’s fraught with geopolitical challenges. 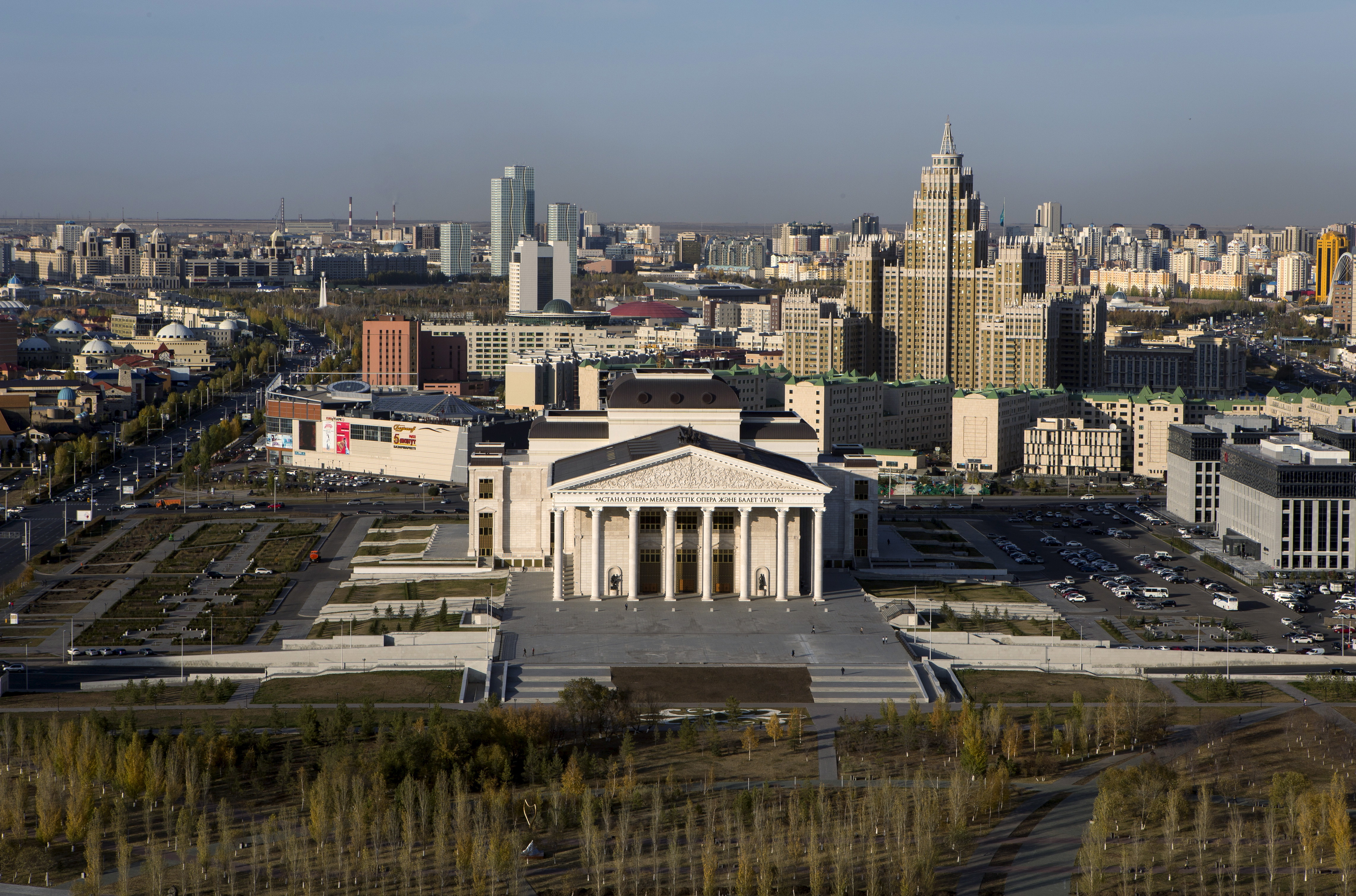 China may be eyeing Astana, Kazakhstan, to become a hub on its New Silk Road. Credit: REUTERS/Shamil Zhumatov.

China is clearly on a charm offensive, insisting that the “One Belt, One Road” initiative is a benign effort to bring economic development and prosperity to Central Asia. Having signed dozens of Memoranda of Understanding with various countries along this so-called New Silk Road, the Chinese plan to use the $40-billion Silk Road Fund and the $100-billion Asian Infrastructure Investment Bank (AIIB) to provide at least partial funding for building connectivity infrastructure between China and Europe. They’re hoping that cooperation with the World Bank, the Asian Development Bank, and the European Bank for Reconstruction and Development can help mobilize additional funding. China, therefore, is brandishing its economic prowess.

It’s not surprising that the Kazakh government is keen to become a hub for the initiative—after all, it will come (so it hopes) with a wave of Chinese investments. The economy has suffered from a fall in oil prices and spillover damage from Western sanctions against Russia.

At the Astana Club meeting in November, Prime Minister Karim Massimov and other Kazakh speakers emphasized that their country’s location is ideal for the “connectivity” the Chinese are seeking. Despite obvious differences (including size, lack of sea access, no major harbor, and economically struggling neighbors), Kazakhstan would like to see itself as the “Singapore of Central Asia.” It aspires to become more than just a major corridor for Chinese goods to travel to Europe—rather, Kazakh leaders want Astana to become a regional financial center, based on English law, and to form new free trade zones in the region.

But the geopolitics of the “One Belt, One Road” initiative might pose challenges. Chinese participants at last month’s meeting pitched the initiative as a total win-win, and depicted their country as a well-meaning “soft giant” with no hard power agenda. But there are tougher and possibly less benign political aspects of the project related to the struggle for influence in the region.

Russian participants only thinly disguised their concerns about the project, recognizing the potential damage to Russian geopolitical and economic interests if current routes transiting Russia were replaced. They couched their concerns within the context of regional security challenges, including possible connections between Russian and Central Asian jihadists and other extremists in the Middle East. They seemed to be saying: “wait, this is our backyard and nothing happens here without our consent.”

Alongside their overall enthusiasm for the project, Kazakh leaders are a bit wary, too. It could, in the end, help extricate Kazakhstan from Russia’s grip over its economy and—in particular—politics. Yet they also seem to quietly recognize that the “One Belt, One Road” initiative could mean that one big brother replaces another. Kazakh elites are certainly debating on that.

Where do the United States and European Union fit into these tricky geopolitics? Although John Kerry visited the region in November (the first trip by a U.S. secretary of state in five years), Washington has been pretty disengaged from Central Asia. The EU, meanwhile, has other priorities—namely dealing with the refugee crisis and terrorism. But there is a real question of whether Europe has an interest in supporting “One Belt, One Road” or even greater connectivity between the China and Central Asia in general. So far, only a handful of individual countries—such as the U.K, Hungary, and Poland—have been vocal on the topic, but not the European Union as a whole.

Kazakhstan is on the front lines of the ongoing struggle for a new international order. Stuck, for the moment, between Chinese and Russian jostling, it’s not clear how much political and economic maneuvering room Kazakhstan and its Central Asian neighbors will enjoy. Nor is it clear how—or whether—the United States and the EU will enter the fray. The new “great game,” unlike its 19th century predecessor, may well remain one just between China and Russia, at least for the foreseeable future. Would that serve Western and Kazakh interests?

[While the FBI, the National Security Agency and several other government agencies have long worked on foreign interference,] we are not organized in a way where we are building a coherent threat picture.