On November 10, a Russian television broadcast of a meeting between President Vladimir Putin and some of his senior military officers revealed a “secret” plan for a long-range, nuclear-armed torpedo called Status-6. The broadcast on state-run Channel One showed a diagram of the torpedo, filmed over the shoulder of a Russian officer.

According to BBC, the diagram described the purpose of the Status-6 as to “destroy important economic installations of the enemy in coastal areas and cause guaranteed devastating damage to the country’s territory by creating wide areas of radioactive contamination, rendering them unusable for military, economic or other activity for a long time.” 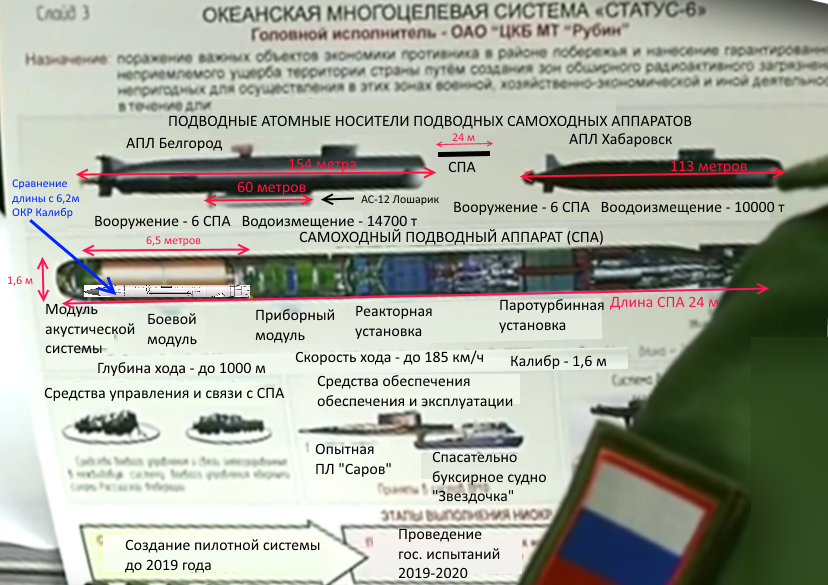 Not an accidental leak

To begin with, this was no accidental leak. Televised events involving the Russian president are carefully scripted by the Kremlin. Even were a Russian cameraman daring enough to film the diagram surreptitiously, his producer would have made a phone call to check with higher authority before broadcasting a secret weapon to the world.

The picture was aired because the Kremlin wanted it aired and wanted the world to believe that Russia has plans for a large nuclear torpedo. That fits with Moscow’s pattern of nuclear saber-rattling over the past two years. Along with a generally more belligerent stance toward the West, flights by Bear bombers near NATO air space, and submarine incursions in Swedish and Finnish waters, Putin and other Russian officials take every possible occasion to remind the world of something the world already knows well: Russia has an awful lot of nuclear weapons.

Is the Status-6 intended to be real? As Jeffrey Lewis has pointed out, it would appear to be a particularly nasty weapon that would generate massive amounts of radioactivity if detonated in shallow waters. It also would appear to have some drawbacks.

First of all, the diagram indicated that the torpedo, which would be launched from a submarine mothership, will have a range of 10,000 kilometers (more than 6,000 miles). The long range would allow the torpedo to be fired from waters close to Russia, reducing the exposure of the Russian mothership to U.S. and NATO anti-submarine capabilities. At its alleged speed of 100 knots (about 115 miles per hour), if launched from north of Russia’s Kola Peninsula, the torpedo would take some 40 hours to reach targets on the U.S. East Coast. That’s a long time; do Russian military planners really want a system that takes nearly two days to strike its objectives?

Second, at a speed of 100 knots, the Status-6 would be much faster than conventional torpedoes. When it comes to underwater travel, more speed usually means more noise, increasing the risk of detection. This would not appear to be a particularly stealthy system. NATO navies might not have an ability to stop it, but they might well know where it was and where it was headed.

This would not appear to be a particularly stealthy system.

Third, the Russians as a rule exercise caution about how they manage and control nuclear arms. Would Russian navy commanders be comfortable with an unmanned nuclear weapon roaming the ocean on its own for up to two days traveling to its target—or perhaps even longer if it traveled to near the target and simply lurked?

This is not to say that the Status-6 is not a real weapon design. The Russians, and the Soviets before them, have built some bizarre and nasty devices. But it’s not obvious that the Status-6 would be the weapon of choice for many operations—that is, unless the Russian leadership was prepared to have its cities nuked in response.

For all the oddities of the Status-6 torpedo, there would appear to be one bit of good news. Military strategists since the dawn of the nuclear ballistic missile age have obsessed over the possibility of surprise attack. Given its long travel time to target, possibly noisily announcing its course along the way, the Status-6 would not appear to make a good first-strike weapon.

The Russian military understands this. The Russian public may not. The Status-6 revelation thus may have been aimed at domestic viewers, to assure them that, despite all of the anxiety that Moscow voices about U.S. missile defenses, the Russian military will still be able to strike back.

This episode illustrates the very different attitudes of the American and Russian presidents toward nuclear arms. While noting that, as long as nuclear weapons exist, the United States will maintain a reliable nuclear deterrent, Obama stresses the need to reduce nuclear risks and seeks to reduce the role and number of nuclear weapons in U.S. security policy.

Putin, on the other hand, has refused to engage in any nuclear arms reduction negotiations since the New START Treaty. He instead talks rather loosely about nuclear weapons—he said he was prepared to go on a nuclear alert when Russia illegally seized Crimea in 2014—and has bizarre new weapon designs revealed during his televised meetings. That’s a striking and unsettling contrast.