With Russian-European relations at a low ebb, now is a tricky time to push forward a new energy agreement between the two. Nevertheless, on September 4, a consortium of energy companies—including Gazprom, Shell, ENGIE, OMV, BASF, and E.ON—signed a shareholders’ agreement on the Nord Stream 2 pipeline. With a total capacity of 55 billion cubic meters (bcm), Nord Stream 2—which directly connects Russia and Germany beneath the Baltic Sea—will double the capacity of Nord Stream 1, which has been in operation since 2011.

Unsurprisingly, the prospect of importing additional Russian gas into the EU has raised many red flags. Analysts in the European Commission, the State Department, and beyond have warned that the pipeline carries the risk of allowing Russia to cut off energy to certain Eastern European states and makes Europe as a whole ever more dependent on Russian energy.

However, most of the critiques miss the point. Although the pipeline expansion may not benefit some individual member states, the project is—on aggregate—beneficial for Europe. Counterintuitive as it may sound, Nord Stream 2 is a good idea provided that EU member states continue their so far successful efforts to further integrate energy markets. The fact that they have not done so already is something Europe should hold against itself, and it is not the result of Russian mingling. 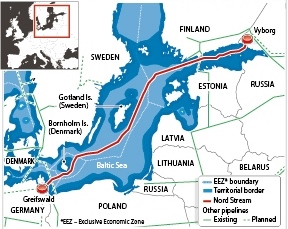 To see why this is true, it is important to move beyond the simplistic assumption that more Russian gas in Europe creates more Russian political leverage. As commentators on the Ukraine crisis have rightly observed, European member states have become far more resilient to market power abuse by Gazprom than was the case in the past. As I have described in my recent book on European energy security, by better interconnecting markets—particularly in Central and Eastern Europe—natural gas can flow increasingly freely throughout the EU. A lack of such market integration has arguably been the greatest threat to European energy security to date.

Ensuring sufficient storage capacity and ample room to attract liquefied natural gas (LNG) are other measures that have helped increase energy security on the continent. Admittedly, there continue to be weak links here and there, and EU member states will have to work hard to iron those out in the coming years. This underlines, however, the fact that European energy security has to be addressed by member states themselves through internal market reforms and infrastructure projects, and has little to do with where natural gas comes from.

More broadly speaking, European laws have dramatically altered the rules of the game in the EU. Gazprom, for instance, is in an ongoing dispute with the European Commission over allegedly breaking EU competition rules. As Andreas Goldthau and Nick Sitter have described in more detail, the strength of the EU policy framework should not be underestimated.

Regarding Nord Stream 2, it is crucial to keep in mind that natural gas, once it has reached the first buyer in the EU, essentially becomes a commodity. This is because destination clauses, which prevent buyers from reselling natural gas, are no longer allowed under European legislation. This in turn makes concerns about extra “Russian” gas coming to the EU rather dubious: Once in the EU, this natural gas is no longer Russian (whatever that means to begin with). And as long as member states have access to alternative resources, the concern of market dominance loses its validity.

Critics have also questioned the economics of Nord Stream 2. These arguments tend to focus on the costs, in combination with the lack of need for additional capacity, but both arguments are weak. Consider, for instance, that Gazprom currently pays an estimated $3 billion annually on transit fees to ship gas through Ukraine alone. The Ukrainian Energy Minister has said that the country wants to double transit fees for Gazprom, but that probably only further incentivizes the latter to look for alternative supply routes. Add fees to European member states and consider those costs saved, and the financial argument no longer holds. It is understandable that the Slovakian authorities are not pleased with the possibility of their transmission system operator Eustream losing out on transit revenues. But that is a different, and less compelling, argument than the outcries over energy security.

Similarly, it’s been pointed out that only half of the capacity of Nord Stream 1 is currently being used. So why build another pipeline? First, only half of Nord Stream 1 is used because the adjacent pipeline, OPAL (which runs from northern Germany to the Czech Republic), is awaiting an exemption from EU regulations. In January 2014, a deal between the operator Wingas and the European Commission was almost brokered, but talks were suspended when the war in Ukraine broke out. In addition, it is wrong to assume that pipeline capacity and contractual obligations are always well-aligned. Suppliers create room to maneuver in order to guarantee that they can adhere to contractual obligations in case of unexpected disruptions.

Finally, critics of Nord Stream 2 point out that gas demand in Europe is not growing. Though that is surely true, it is important to keep in mind that EU domestic gas production is declining rapidly. The Dutch are scaling down gas extraction, as public support has eroded due to earthquakes, and unconventional gas extraction throughout Europe is not getting off the ground. In addition, most companies believe that in the mid- to long-term, a high enough price on carbon will emerge to make natural gas more competitive than it currently is. There is a void to be filled there, and the companies involved in Nord Stream 2 are eyeing that opportunity.

Of course the Nord Stream expansion is also a political project. Russia’s Gazprom indicated several years ago that it wants to bypass Ukraine, which it sees as an unreliable transit state because it repeatedly used its transit monopoly as a bargaining chip in price disputes. Constructing Nord Stream 1 was part of this strategy and, with South Stream in shambles and Turkish Stream stalling, Nord Stream 2 would be too.

The political context in which these announcements were made is crucial. It seems counterintuitive that Europe would reach out across the Baltic Sea to increase gas trade with Gazprom while simultaneously maintaining sanctions against Russia over Ukraine. But the companies that made this deal assume that trade with Russia will resume someday. European authorities, meanwhile, should be aware of their own regulatory strength, and they may well make proceeding with Nord Stream 2 contingent on the full implementation of the Minsk II agreement in Ukraine (and obviously on existing EU energy legislation).

To suggest that the pipeline jeopardizes European energy security writ large ignores the European market power and regulatory strength. For an increasingly import-dependent continent, additional options to import natural gas are good news, provided that member states implement legislation, fight corruption, and step up their efforts to complete the internal market. Those efforts have to be made in Budapest, Sofia, Warsaw, and Brussels. Moscow has little, if any, say.

Germany is now the fulcrum for Vladimir Putin’s pressure

NATO is hedging on its promise to protect the Baltics

Russia, Ukraine, and the decision to negotiate