When we picture software companies, we tend to see 20-somethings at Cambridge or Bay Area startups developing the next blockbuster smartphone app. But if the footprint of software developers really were isolated to the coasts geographically and to consumers economically, it would be reasonable to question whether software is integral to the nation’s competitive advantage.

But research released last week by the National Science Foundation points to the economy-wide influence of software creation. According to NSF’s Business Research and Development and Innovation Survey, half of all companies that perform their own R&D invest in software R&D. These investments in new and improved software represent one-third of the nation’s private-sector R&D dollars and are distributed across every industry. In fact, traditional information technology industries (software, semiconductors, and data processing) account for less than half of the companies performing software development.

To be clear: software R&D does not include buying and using out-of-the-box software like Microsoft Office but rather actually developing software for or within a firm’s own products. This includes everything from the code that runs electronic braking systems to freight inventory optimization software.

Software has become a platform on which almost all innovative companies depend. In the auto industry over three-quarter of firms that perform R&D invest in software R&D; in mining and extraction over 60 percent do. Even in the pharmaceutical sector the share is 46 percent. 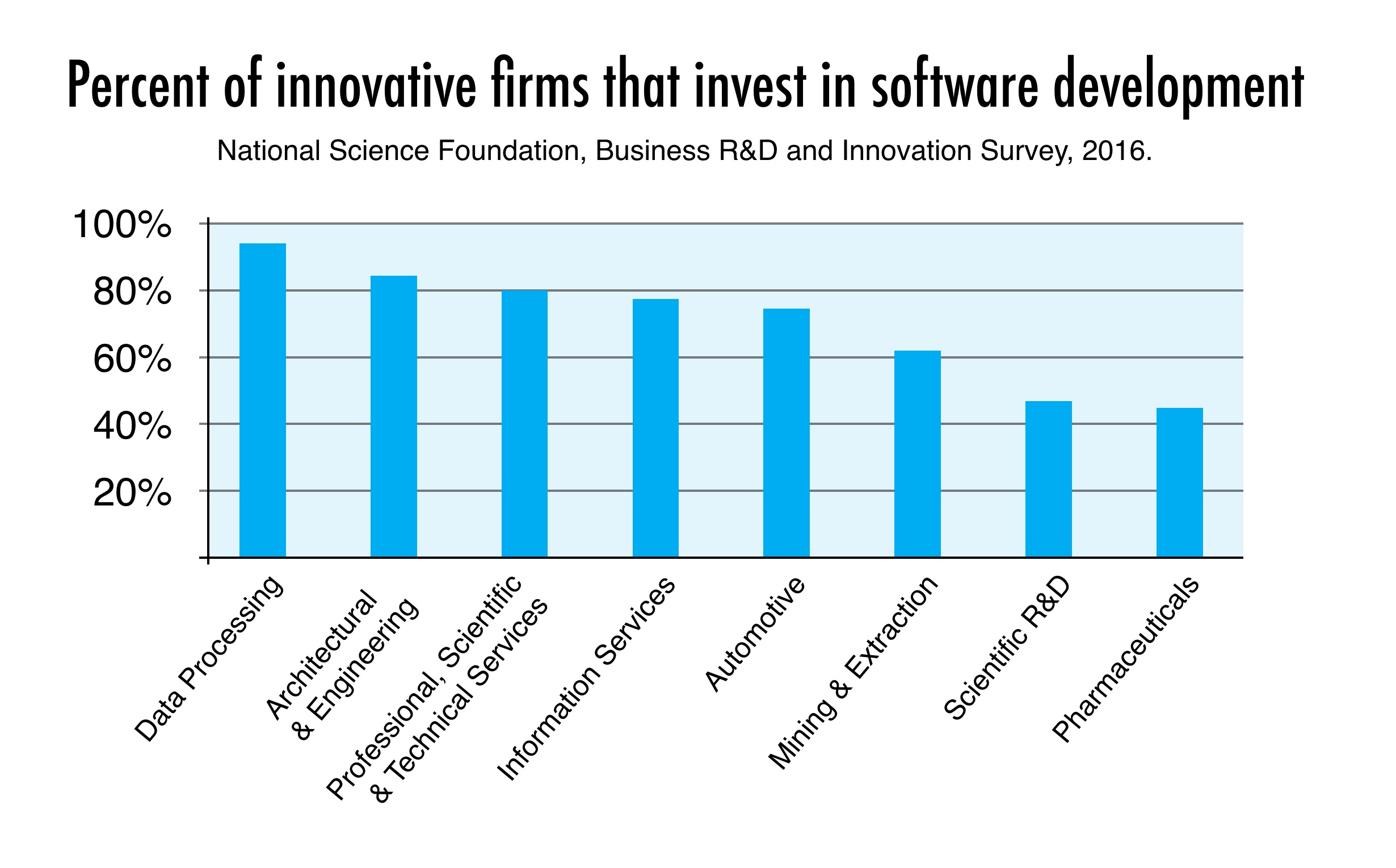 While in many of these industries software R&D remains a small portion of the total dollars companies invest, the fact that half of the nation’s innovative firms are actively developing software is astounding. No other knowledge input has the breadth of impact on the U.S. economy as software.

Its prevalence suggests two things. First, for the United States software is a core competitive advantage, and its development should be considered a matter of public policy akin to worker training. In fact, most of the value of software R&D is tied to human, not physical, capital: the NSF survey found that 76 percent of R&D costs in the IT sector were labor costs compared to only 60 percent nationally. In other words, those who care about a scientific and engineering workforce should care about software.

Second, the fact that so many firms are investing in software development and not just relying on out-of-the-box programs implies that the majority of software has not yet been commoditized, as economist Nicolas Carr suggested it would be over a decade ago.

The value of customized software is potentially a double win for the U.S. economy. If software were more easily commoditized, low-cost countries could better leverage their low-wage labor to out-compete the United States. The evidence suggests that even developed economies (particularly in Europe) have yet to catch up to the United States in their sophistication of software application, meaning software development continues to be a differentiating factor for U.S. firms.

Together, this new research suggests software development is an economic advantage not just for Boston or Silicon Valley, but the whole country.

The Supreme Court takes up Section 230