A recent public opinion survey conducted by Brookings non-resident senior fellow Shibley Telhami sparked headlines focused on its conclusion that American views of Muslims and Islam have become favorable. However, the survey offered another important finding that is particularly relevant in this political season: evidence that the cleavages between supporters of Hillary Clinton and Donald Trump, respectively, on Muslims, Islam, and the Israeli-Palestinians peace process are much deeper than on most other issues.

Telhami and colleague William Galston, Brookings’ Ezra K. Zilkha Chair in Governance Studies, discussed the poll and its conclusions at an event earlier this month moderated by Tamara Cofman Wittes, director of the Center for Middle East Policy at Brookings. Galston noted that that the cleavages between Clinton supporters and Trump supporters on issues related to Islam suggested by Telhami’s polls are remarkable even when compared to hot-button domestic issues in the United States.

In Galston’s words: “all this is to suggest that the election that we [are] actually going to have represents a greater degree of polarization between the two candidates and their supporters—if such a thing were imaginable—than even between the political parties that they represent. So it’s polarization on steroids.” Since whoever wins the presidential election will be expected to represent all Americans, these kinds of cleavages will complicate governing down the road.

Galston commented that “it would be wonderful if we were moving back toward an era in which political differences ended at the water’s edge …[However,] those days are gone and this survey I think puts a fine point on that.”

Wittes noted that in the contemporary media environment, “people are living in informational bubbles where their preexisting views are reinforced…of course, we are in a campaign season right now so all of those narratives are magnified.” She questioned whether “it’s the campaign that’s driving this polarization more than the polarization driving the candidates?” Telhami explained that views are shaped by voting preferences, but also by the demographic shifts in the population and the greater exposure of Americans to Islam and related issues in recent years.

What do the polls show about how the Orlando shooting affected Americans’ attitudes overall on Muslims and Islam? When polled after the Orlando shooting, a strong majority of respondents (62 percent) expressed a favorable view of Muslims. Contrast that with 58 percent of respondents who said that in the weeks before the attacks, and only 53 percent who shared the view in November 2015, according to another of Telhami’s polls. 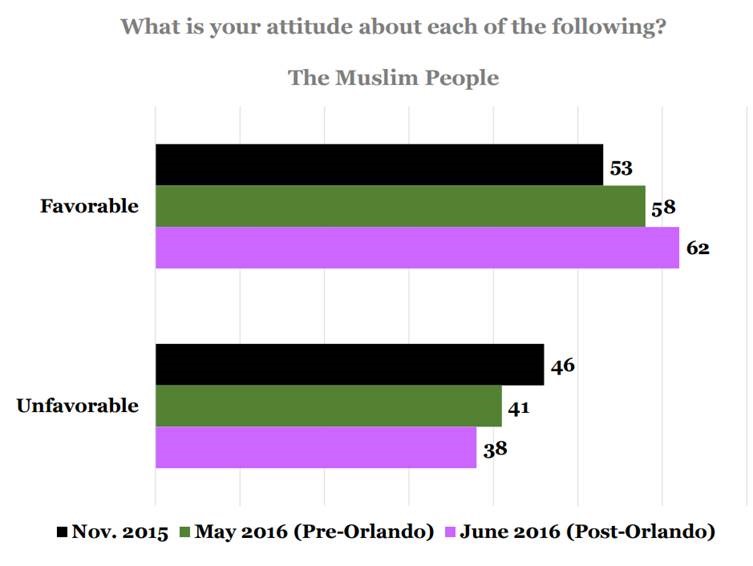 This finding seems perplexing on its face, since one might expect that prominent anti-Muslim rhetoric in the wake of the shooting might have swayed Americans towards more negative opinions. As Telhami has suggested, this poll may be an indication that Americans are pushing back against that rhetoric.

In any case, polarization among Americans—on these and a range of other issues—isn’t likely to dissipate any time soon. It will remain essential to understand why people hold the views that they do, since the next president will face the daunting task of trying to rally voters from both ends of the American political spectrum behind his or her agenda.