A reform that induced competition in the Israeli telecommunications sector in 2012, reducing Israelis’ cell phone bills by over 70 percent on average, catapulted Moshe Kahlon—at the time serving as minister of welfare and of communications—from being a minor league politician to gaining near-celebrity status. Kahlon’s reform was richly rewarded by the Israeli public, when his new party Kulanu (“all of us”), ran on a monopoly-busting platform, winning 10 out of 120 seats in the Knesset in the 2015 elections. This political achievement led to his appointment as finance minister in the current Israeli government.

This is suggestive of two important developments: First, national security has ceased to be the only concern Israelis consider at the polls; second, Israeli voters appear willing to highly reward anyone who will do something to lower the cost of living. This has been particularly true since the summer of 2011, when tens of thousands of Israelis (an impressive number given the country’s size) took the streets to demand “social justice” from the government. Ever since, not only Kulanu, but most (if not all) political parties in Israel have run on economic platforms that explicitly seek to lower the cost of living in one way or another.

The concern seems paradoxical, however: Israel’s economy is strong and growing (albeit slowly) and the country—often nicknamed “start-up nation”—has achieved the highest investment in research and development as a share of its GDP in the world, becoming a major hub for entrepreneurship and innovation, perhaps second only to Silicon Valley. How is it possible that a growing economy with healthy macroeconomic stability cannot deliver economic prosperity to its hard-working middle class?

Lagging behind its peers

One common explanation is that there isn’t enough competition in the economy. Lack of competition could lead to monopolistic behavior and with it higher prices, which directly reduces purchasing power in the economy. Low levels of competition, some economists would argue, is a curse that dooms all small-sized economies: how many milk producers can you have in a country with a population the size of New York City? But even when accounting for size, Israel stands out among its peers in the Organization for Economic Cooperation and Development (OECD) for how little competition there is, on average, across almost all sectors. 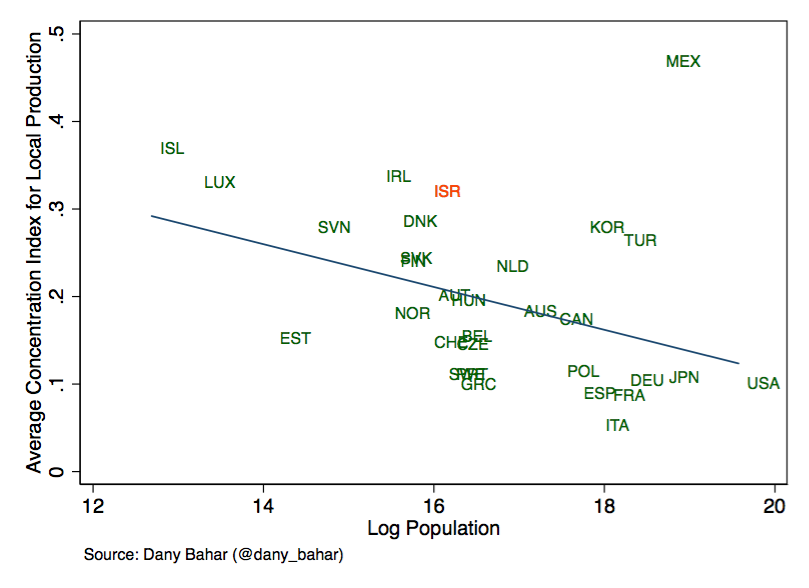 Notes: 1) The index used to measure market concentration is the Herfindahl-Hirschman Index. 2) Data on market concentration comes from database privately acquired by Harvard’s Center for International Development and the aggregated figures were constructed by post-doctoral fellow Michele Coscia.

Figure 1 plots the average market concentration index computed for a sample of local producers in different OECD economies (weighted for the share of the sector in the economy) against their respective population sizes. While the figures are based on a sample and not the universe of firms (implying the graph is suggestive rather than definitive), two interesting insights emerge from the data: first, as expected, larger countries tend to be less concentrated or to have more competition on average; second, Israel stands out by having high concentration levels (alongside Ireland) among similar-sized OECD peers.

One way to counteract low levels of local competition is to allow foreign firms to compete with local producers. But that is precisely not the case in Israel. 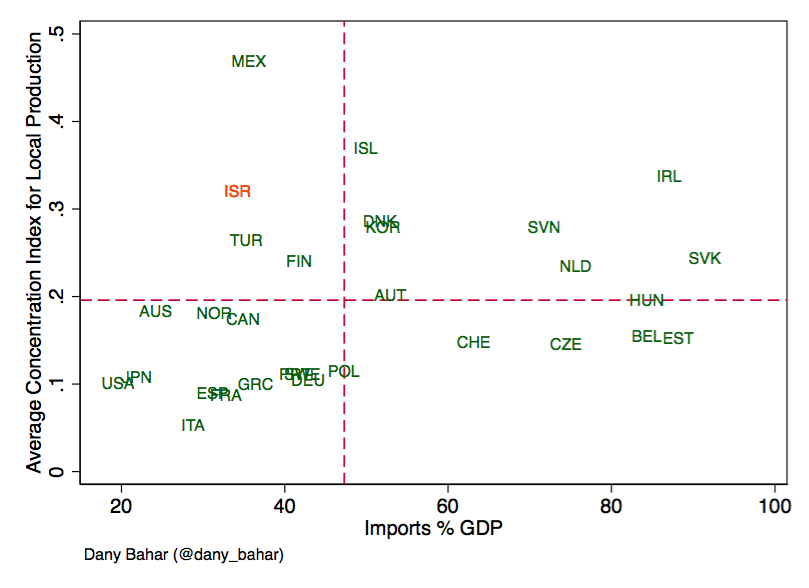 Note: Data for imports as a share of GDP come from the World Development Indicators dataset by the World Bank.

A closer inspection reveals that across all industries, Israel has less market competition than the OECD average, as Figure 3 shows. In particular, in manufacturing (food producers, for instance) and services (hotels, restaurants, health services, etc.)—which account for more than half the Israeli economy—the levels of concentration are about 70 percent and 100 percent higher than the OECD average, respectively. The construction sector also seems to be highly concentrated as compared to OECD peers, which likely contributes to high real estate prices in some areas of the country. The same goes for the banking sector, where lack of competition is believed to largely explain high fees, which directly impact all other economic activities. 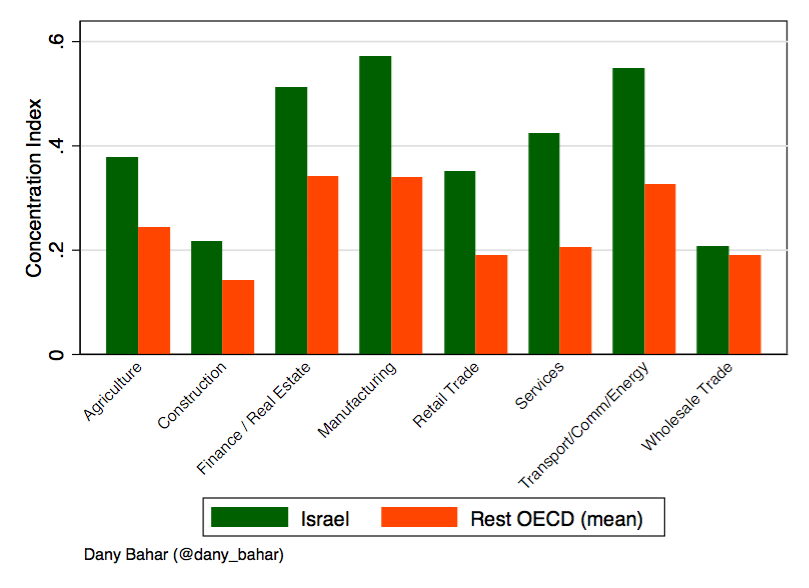 Sectors such as retail (supermarkets, grocery stores, clothing stores, etc.) also seem to be quite concentrated among a few players as compared to OECD countries. Wholesale traders of durable goods (wholesalers of furniture, machinery, electronics, and others) seem to be at a similar level of concentration as OECD peers, suggesting that the final consumer suffers the most from the monopolistic behavior of retailers of these durable goods.

The natural question all this poses is: what are the market failures that hinder competition in the Israeli economy? One would think that regulatory procedures (i.e., high fixed costs) or lack of competitive credit markets prevent new firms from entering the market, and/or slow down the entrance of foreign firms. Israel ranks 53rd in the World Bank’s 2016 Doing Business index, positioning it in the third-to-last place among its OECD peers. According to the report, the most critical issues in Israel’s regulatory environment are the difficulties in registering a property (it takes on average 81 days to register a property in Israel, compared to 22 days in OECD countries); paying taxes (on average, Israeli firms invest 235 hours a year in paying taxes, compared to 177 in OECD countries); and dealing with construction permits (209 days in Israel, compared to 152 in OECD countries).

Naturally, other factors could explain Israel’s lack of competition. Cases of crony capitalism have attracted media attention over the last few years, for one. And even if voters are more focused on the economy now than in the past, the security context and political instability remain the elephant in the room. Together with regulatory problems, these factors play an important role in weakening the business climate, hindering investment, and in turn maintaining import penetration at low levels (Israel does not have many neighbors to trade with).

Deep reforms to further open the economy to foreign competition and fight crony capitalism are essential to deal with the monopolistic tendencies of the start-up nation and to put Israel back to an inclusive growth path. Yet the Israeli political system creates incentives for politicians to promote quick (and probably ineffective) fixes such as subsidies or tax cuts that might or might not ease the daily struggles of the middle class. But there is no way around it: in order to deal with the core of the problem, implementing structural—and possibly costly— reforms is the only solution.