Saudi Arabia is the biggest oil exporter in the world. However, this status may be threatened as a result of domestic oil consumption. Several recent studies predict that Saudi Arabia will be a net oil importer by 2030 or 2038. Other regional energy exporters such as the United Arab Emirates, Kuwait, and Iran have worked to control their domestic consumption to address the skyrocketing costs, economic distortions, and potential vulnerabilities of high rates of internal energy utilization. The current efforts of Saudi Arabia to curb domestic consumption offer an excellent litmus test for its neighbors, as well as other oil and gas exporting countries.

Saudi Arabia is currently the biggest energy consumer in the Middle East. Energy demand in Saudi Arabia has increased annually by an average of 7.5 percent over the last five years. Economic and population growth explain some of the surge; even with oil prices flat or decreasing, real GDP rose by 3.6 percent in 2014. However, Saudi Arabia has not used energy efficiently. The kingdom’s energy intensity (defined as total energy consumption per unit of GDP, where Saudi Arabia is 4.1 when the UK sets 1 at 2013) is four times that of energy efficient countries, such as Britain and Germany, and their energy consumption per capita is high (see Figures 1 and 2). Saudi Arabia consumes the largest amount of oil in the world for electricity: according to the Saudi Electricity Company, 58 percent of the country’s total electricity supply comes from oil, with associated gas generating nearly 42 percent  of the country’s total electricity in 2013. Domestic oil consumption has risen faster than of production and exports since 1991 (see Figures 3 and 4). 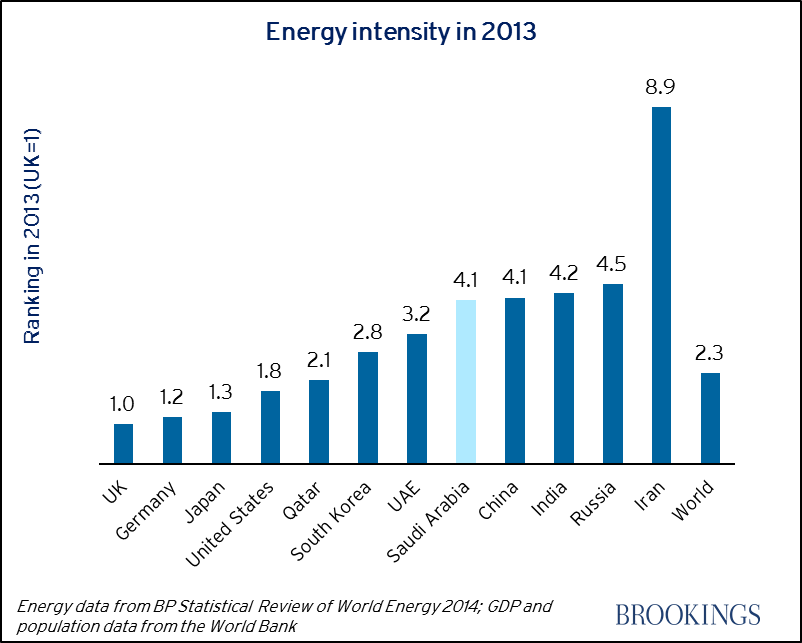 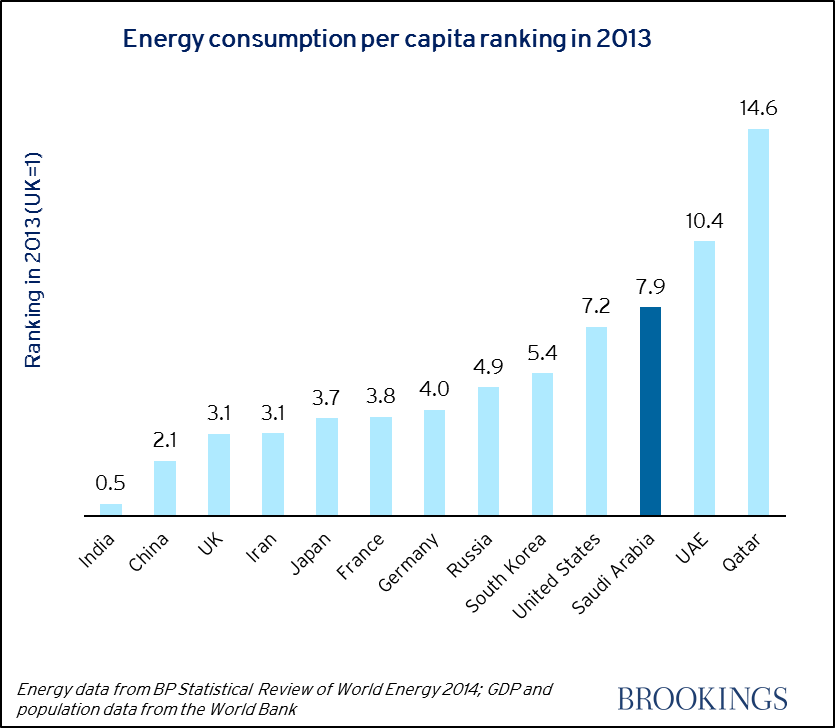 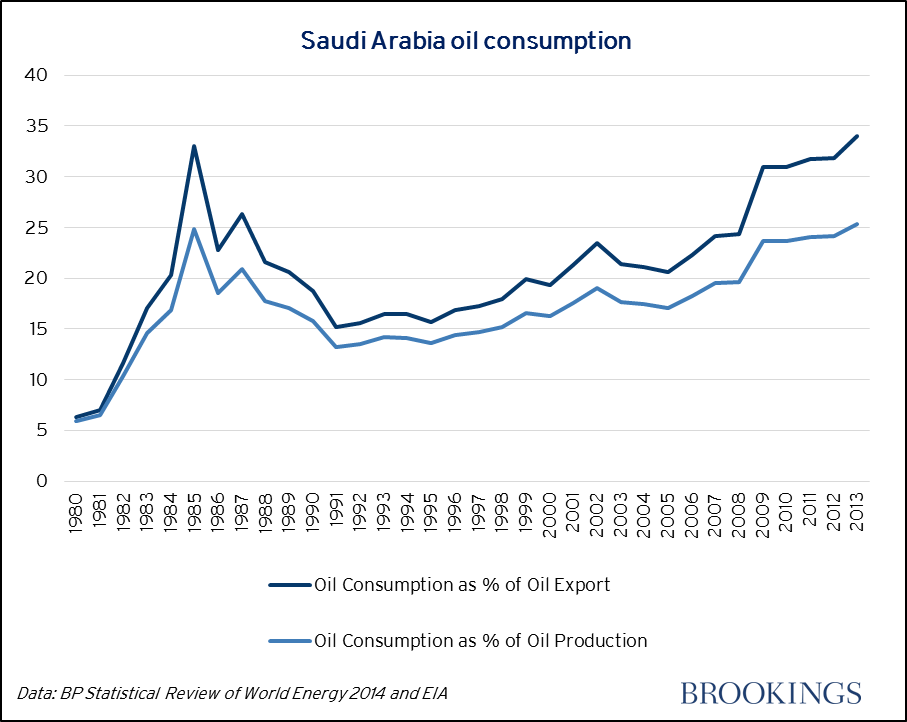 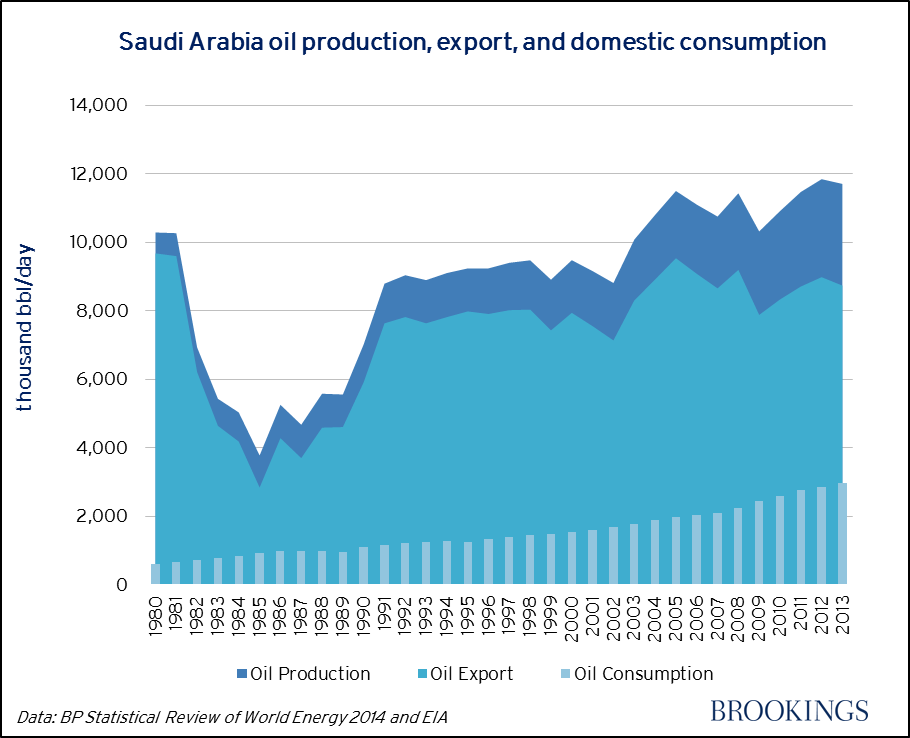 To tackle this problem, Saudi Arabia established the Saudi Energy Efficiency Center (SEEC) in 2010.The primary Saudi consumers of energy are residential users, the service sector, and the transport sector, so the SEEC established minimum energy performance standard (MEPS) to regulate cooling and lighting consumption, created a fuel economy standard for vehicles, and enacted an energy-efficient building code. The Saudi Arabian government also began trial use of smart meters to control peak energy use in the industrial and service sectors and is also currently drafting energy efficiency laws with strong enforcement mechanisms. Saudi Arabia’s electricity demand is projected to increase from approximately 50 GW in 2013 to 120 GW in 2032. The government has finished a renewable energy procurement plan, which aims to augment renewable energy capacity by 20 GW in 2020, 40 GW in 2025, and 54 GW in 2032. The government will also decide whether or not to put in place a feed-in tariff, which requires consumers to pay for renewable energy via electricity bill later this year.

However, there are significant obstacles to curbing domestic energy use. Discussion of pricing reform remains a taboo in the country, although attitudes seem to be more accepting than in the past. Saudi Arabia spends more on fuel subsidies than any other country in the world, except for Iran. These subsidies maintain low prices for electricity and gasoline, which tends to undercut the government’s demand-side energy efficiency incentives. The regulations establish higher energy-efficiency standards for new products; however, these standards do not apply to existing inventory. As a result, the cost of energy-efficient products is likely to rise. High costs coupled with subsidized electricity and gasoline deter consumers from replacing inexpensive products— such as cars, appliances, and factory equipment— with more expensive, energy-efficient alternatives. Similarly, there are few incentives for companies and building owners to invest in energy-efficient products. Despite the government’s efforts, many companies are slow to adapt to new regulations, and they may be unable to meet the government’s targets and timeline for higher energy efficiency standards. The failure to implement pricing reform will deter residential users from adopting smart meters, even though this sector accounts for almost 50 percent of total electricity consumption.

Even if Saudi Arabia establishes a feed-in tariff, the government will not be able to pass on all costs of renewable energy to consumers—the surcharge amount of such a tariff would not be sufficient to support government plans for $109 billion in  investment by 2032. Instead, meeting official renewable energy targets will require significant government investment. However, in 2014, Riyadh went into deficit for the first time since 2011, and has since relied on huge drawdowns from its sovereign wealth fund. Saudi Arabia’s economy is dependent on oil exports for more than 80 percent of the government’s revenue. With oil prices now lower than 2014 fiscal breakeven oil prices, significant further spending to meet renewable energy targets seems unlikely. In these tighter financial circumstances, spending on social welfare, education, and military commitments will likely take priority over renewable energy.[2] Recent turmoil in the broader Middle East region has provoked a more assertive—and expensive— Saudi foreign policy. Saudi defense spending currently accounts for 35 percent of its total budget and will increase this year. In addition, education also remains a high priority due to high young adult unemployment (40 percent).

Still, the diversification of revenue sources should be seen also a key defensive policy component against unstable oil prices. The successful domestic development of renewable energy and the consequential job creation associated with these initiatives would have positive spillover effects for the Saudi economy and its political stability. Addressing spiraling domestic energy demand must  remain at the top of the agenda for the new Saudi king, and for other governments as well. Continued unconstrained increases in internal consumption could conceivably leave Saudi Arabia a net oil importer in the future. Obviously, this would have a dramatic impact on global energy markets and oil importing countries. The concerns should be particularly acute in Asia, since a number of countries, including the Philippines, Korea, Japan, and Taiwan, are overwhelmingly dependent on Gulf oil exports. With the dependence of the United States predicted to drop by more than 20 percent between 2010 and 2020, governments in Asia should consider strategies to hedge against future supply disruptions resulting from unrestrained energy consumption at home in Saudi Arabia and other key Gulf oil exporters.


Jennifer Potvin and Rachel Slattery contributed to this post.

[1] Sources for Figures 3 and 4: BP, “BP Statistical Review 2014,” and EIA, “Overview data for Saudi Arabia,” accessed 12 May 2015, http://www.eia.gov/countries/country-data.cfm?fips=sa. The forecast is based on the trend over the last ten years. Production forecast is based on the refinery capacity, which Saudi Aramco CEO has mentioned (see “Saudi Aramco CEO: Oil industry ‘needs timely investments,’” Arab News, 26 August 2014, http://www.arabnews.com/economy/news/620836).

We still got a way to go and the Saudis recognise that [good vaccine news today does not mean demand recovery tomorrow, next week or even next month]. The vaccine news is good but we’re seeing a resurgence in the [United] States and in Europe and that says to us that demand is not coming back quickly. Prices may bounce a little on vaccine news but they will go back down when people realise that it will not fix the problem immediately.

The United States-Saudi Arabia relationship was in trouble before the coronavirus and oil double-crisis. The Saudis are now losing support across the board politically. Trump and his son-in-law Jared are the only holdouts and that is not a good place to be when oil prices are so low

The only thing holding the [US-Saudi] relationship together now is Trump—he has a peculiar affinity for Saudi Arabia... I think this [in reference to the oil price war of April 2020] is a very significant and potentially existential moment in the relationship. There have been ups and downs, and no foreign country has inflicted as much economic pain as they did in 1973, but the relationship survived and recovered because there was still that basic bargain. But we don’t need the Saudis anymore—this comes in a very different geopolitical environment than previous crises... The image of oil sheiks rubbing their hands in glee as we waited to fill up with gas [in 1973] has never made them popular... There’s no question that the Arab Spring unsettled the U.S. relationship with the Saudis. For them, the U.S. response [to calls for reform in the Arab world] was way too sympathetic, and the relationship cooled... The Saudis have a deep problem with the Democrats, and that’s been clear for a long time. Now they have spoiled their relationship with Republicans... I think this time is different. If Biden wins, we will likely see a very fundamental reassessment of the relationship.