Editor’s note: Israelis will go to the polls on March 17 to elect the 20th Knesset, Israel’s parliament, which will then form a new government to replace Prime Minister Benjamin Netanyahu’s current one (he hopes to head the next government as well.) We are following the run-up to the elections in


a series here on Markaz

, the blog of the Brookings Center for Middle East Policy.

One day away from the Israeli elections, the race is too close to predict; when the polls close Tuesday night, it may still be too close to call.

All the three options discussed in previous posts (here and here) remain technically possible: A narrow Netanyahu-led right-wing government, a Herzog government of the left, center and the Ultra-Orthodox, and a national unity government of both Netanyahu’s Likud and Herzog’s Zionist Union.

The past week has seen considerable momentum in favor of the left; the final polls (Israel has a moratorium on polls in the last couple of days before an election) show a consistent gap of about 4 seats in favor of the Zionist Union. 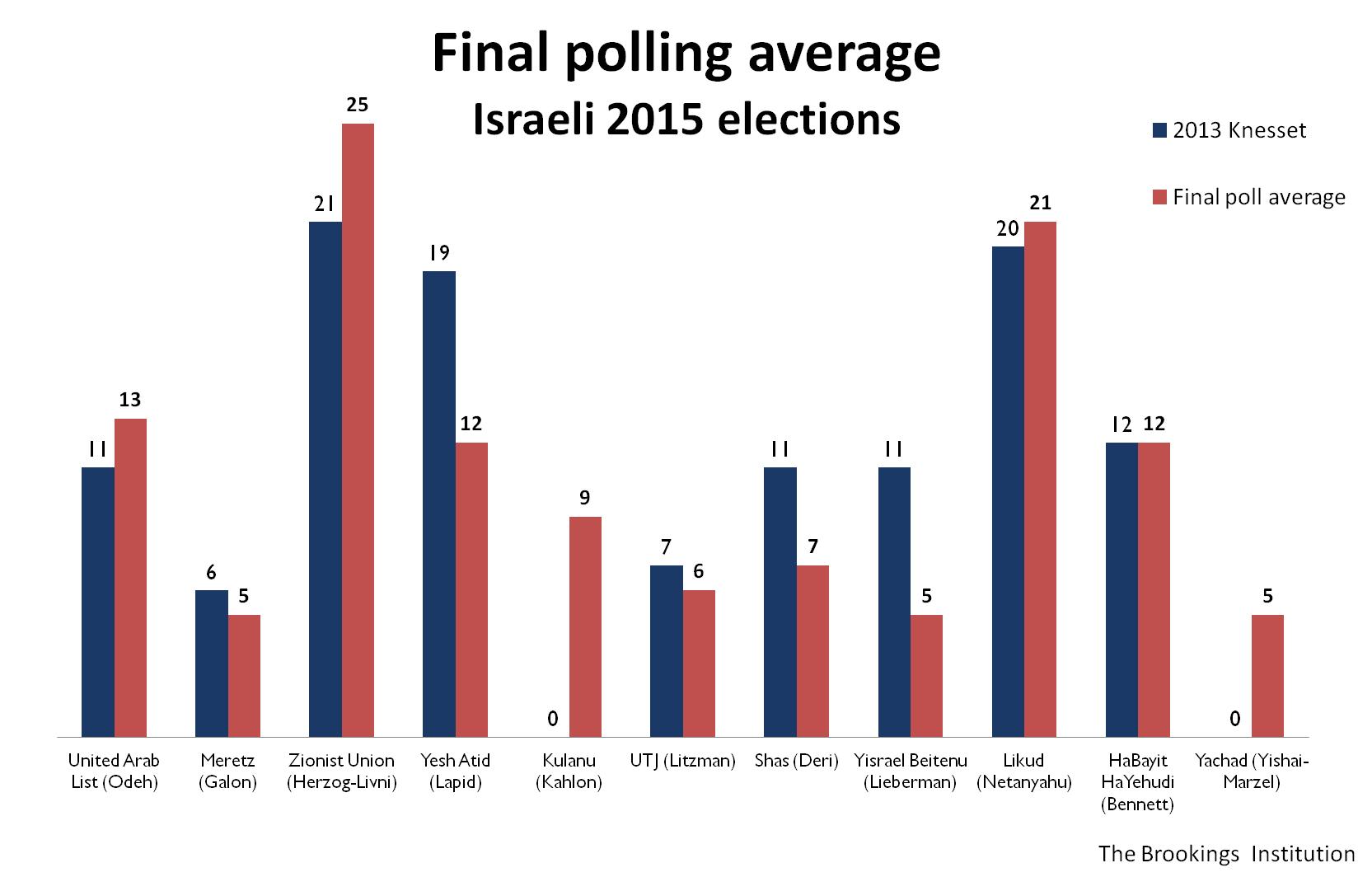 For the final polling numbers, I averaged the last poll published by each of 12 outlets, adding a remainder 120th seat to Yachad, which was closest to an extra seat. The outlets were: Channel 2, Channel 10, Reshet Bet, Walla!, Maariv, Yediot Ahronot, Channel 1, Kol Barama, Globes, Haaretz, Galei Zahal, and the Knesset Channel. The polls were collated by “Project 61,” though this average differs from Project 61’s projection model, which includes the assumption about polling firm errors.

The key, however, remains not which party is largest, but rather which candidate can secure recommendations from more than half of the Knesset (60 seats). To recap, from a previous post:

Under Israeli electoral law (a “single district, proportional representation” system), voters do not elect candidates or regional representatives but rather choose one national list of candidates offered ahead of the polls by a party or an amalgam of parties. Each list that passes a minimum threshold (recently raised to 3.25 percent of the vote, which equals 4 seats) is then awarded seats in the 120-seat Knesset, in proportion to the number of votes it received, nationally. The result is a highly representative—but highly fractured—party system. After the elections, the president (who is not up for general election), consults the elected factions and tasks one Member of Knesset with forming a government that can garner support of a majority of the Knesset (this need not be the leader of the largest faction, merely the MK with the best chance of forming a governing majority). In a party system as fractured as the Israeli one, this invariably entails forming coalitions among various factions in the new Knesset.

The momentum of the left is important nonetheless. If it continues, we may yet find a Herzog camp that can garner 60 votes outright. This is unlikely, given how consistent the polls have been in this campaign, but if Lapid’s party, for example, were to enjoy a last-minute surge, as it did in the 2013 elections, this scenario is possible. (Moshe Kahlon’s new party Kulanu may also enjoy a last-minute surge, which would strengthen the argument below.)

At present, however, there is no clear winner, as Figure 2 shows. Neither prime ministerial candidate has a secure base of 61. 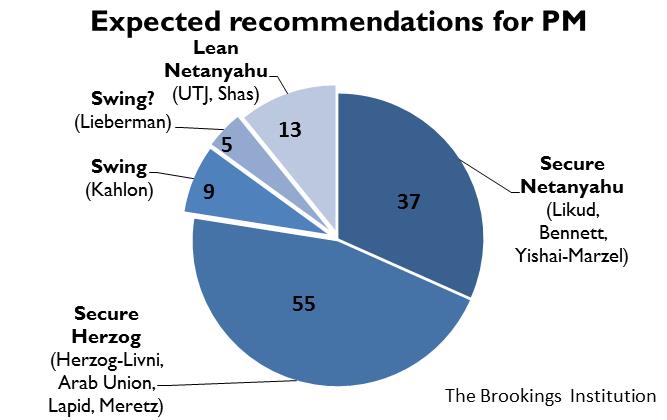 Securely in Netanyahu’s camp are his own Likud, the Jewish Home (HaBayit HaYehudi) of Naftali Bennett, and Yachad, led by Eli Yishai.

Herzog can count on his own Zionist Union and on leftist Meretz. Lapid’s Yesh Atid is committed to toppling Netanyahu and will recommend Herzog if he has a viable chance to win. The Arab Union has remained noncommittal, but it would be a big surprise if the United Arab List did not support Herzog, should he have a chance to win.

The Ultra-Orthodox parties of UTJ and Shas are slightly more on the fence, but both lean to the right. Shas has endorsed Netanyahu, and would support him unless it saw a clear advantage in not doing so. UTJ has not committed to either camp but its antagonism to Yair Lapid makes the right-wing much easier for them to join.

Foreign Minister Avigdor Lieberman has stated his preference against a Herzog-led government and has sounded decidedly right-wing since coming to the conclusion that a Netanyahu government was more likely. But Lieberman remains a wild card. He may prefer a national unity government and he may well try to align himself with the kingmaker-apparent, per the latest polls: Moshe Kahlon.

Who will Kahlon choose?

Should Kahlon side with Herzog, the latter would then have well over 60 recommendations and be granted the first chance to form a coalition. Herzog’s task would remain formidable—he would have to convince UTJ and Shas to join a coalition alongside Lapid, whom they loath and whom they wish to punish for keeping them out of the previous coalition and enacting a series of policies they abhor.

Kahlon certainly has enough of a reason to break with Netanyahu; his hostility to Netanyahu’s economic approach—conservatism that lacks compassion—was enough to entice him to quit the ruling Likud, where he was a rising star.

Indeed, Kahlon’s number 2, Yoav Galant, said to blogger Tal Schneider that their parties first “deal,” or alliance, will be with Lieberman, and the second, he predicted, would be with Herzog. Kahlon was quick to deny Galant’s assertion. (Incidentally, Tal Schneider’s blog is well worth reading throughout the year, in English here).

Should Kahlon side with Netanyahu, the latter, again, would likely get more than 60 recommendations and would have a relatively easy time of forming a coalition.

As noted in the previous post, however, Kahlon and Lieberman may well try and force a national unity government. One way to do so would be by simply not recommending anyone to the president, leaving neither candidate with 60 recommendations, in which case President Reuven Rivlin has said he would try to encourage the formation of a national unity government that would change the electoral system.

The simple truth is: we do not know what Kahlon will do. He remains deliberately non-committal, and would like to keep his cards close to his chest to maximize his leverage as kingmaker.

What to look for

Barring a last-minute surge—which seems more likely than it did a week ago—Tuesday night may see two different victory speeches, one by Netanyahu and one by Herzog. The real interest on election night (exit polls will be published 4pm EDT) will be elsewhere:

Does the anti-Netanyahu camp have 60 seats?
If the left surges, the key will be whether the Herzog camp depicted in Figure 2 reaches 60, which would prevent another Netanyahu term. In that case, Herzog would get the first chance to form a coalition (for 28 days initially, extendable by up to another 14).

Is the gap between the two parties considerable? Did the Likud fall below 20?
If either happens, it could have a psychological effect and may provide political cover for center parties, and especially Kahlon’s Kulanu, to support Herzog.

Did any of the parties fail to pass the minimum threshold of 4 seats?
If Yishai’s Yachad, Meretz, or even Lieberman’s Yisrael Beitenu fail to reach 4 seats, their votes will be forfeited and the seats will be divided proportionally among the rest of the field. Any party that fails to pass will dramatically hurt its camp’s fortunes.

Are there any election night statements of intent from Kahlon or Lieberman?
If the broad deadlock in the polls holds, Kahlon and perhaps Lieberman will hold the power to decide the election outcome. Free from electoral considerations, their statements may be the most consequential of the night.