Polling indicates Americans are sometimes sharply divided on some issues of Middle East policy—seemingly across party lines—yet are remarkably united on other issues. What explains this variation?

Let’s start with some examples. Our polling indicates there is little difference across party lines on how Americans rank the threat of the Islamic State (also called ISIL or ISIS): 70% of Democrats, 67% of Independents, and 72% of Republicans rank ISIS as the biggest threat facing the United States in the Middle East—far above Iran and Israeli-Palestinian violence (the margin of error is +/-3.5%). At the same time, they differ markedly on their openness to using ground forces if the current air campaign fails: While 53% of Republicans would then support using ground forces, only 36% of Democrats and 31% of Independents would.

But before one concludes that Americans tend to agree on the nature of the problem and merely disagree about the kind of policy needed to address the problem, here is another finding that suggests more complexity: While a large majority of Americans sees the Asad regime in Syria as almost as bad as ISIS, Americans seem to be unified in their opposition to having the U.S. military fight Asad’s army: 72% of Republicans and 71% of Democrats oppose it. 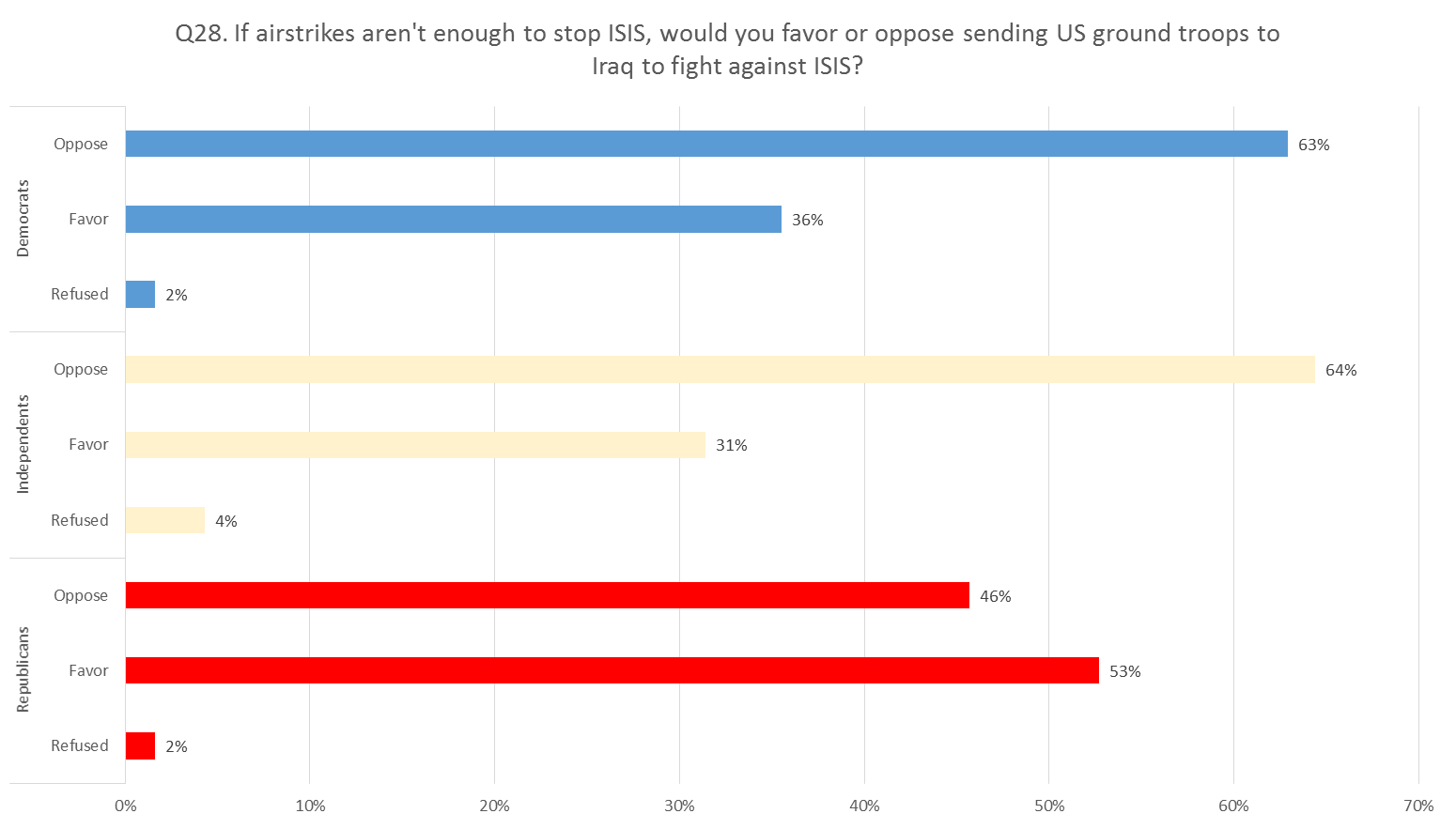 While the party divide is obviously important on a number of issues, it does not seem to explain many of the public’s attitudes. The question is: what does? Our data suggest some preliminary observations.

First, while the party prism can be useful, it’s not always predictive. The public often has a framework, an ideology, or some other prism that helps it form attitudes on specific issues in a manner that may not be entirely calculated; but that organizing framework is not always a political party.

We do find that there are opinion clusters that may not necessarily be causally related. For example, one of the interesting findings in the poll was that a plurality of Americans is most concerned about protecting human rights when it comes to the Israeli-Palestinian conflict—more than worrying about U.S. or Israeli interests. This human rights prism helped cluster a set of attitudes on a number of issues: Those most concerned about human rights tend to oppose sending ground troops to fight ISIS (62%) and do not support fighting Asad in Syria (74%)—larger percentages than the rest of the population. This prism also results in more even-handed stances toward the Israeli-Palestinian conflict. Few of those who are most concerned about human rights want the United States to lean toward Israel (17% vs. 38% for others) and also heavily favor Israel’s democracy over its Jewishness (88% vs. 64% for others). Only 7% of this group think that Muslims support ISIS (compared to 16% of others) and compared to the rest of the population, they are relatively unworried about ISIS recruiting Americans for attacks at home and abroad. Again, all of these attitudes seem to have a tangential relationship to each other but are part of a worldview centered on human rights. 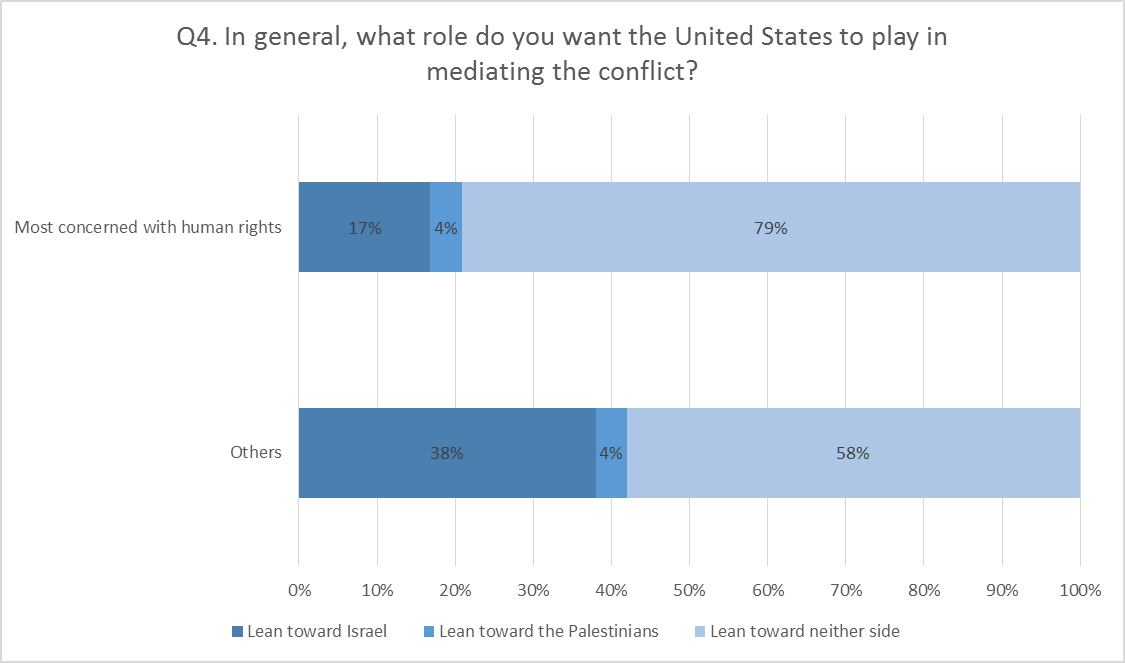 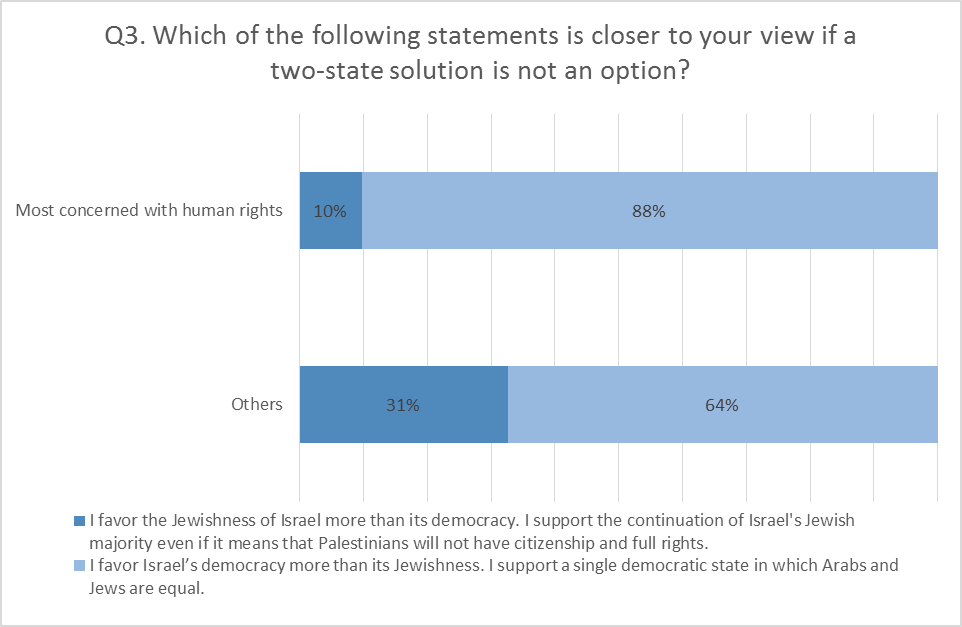 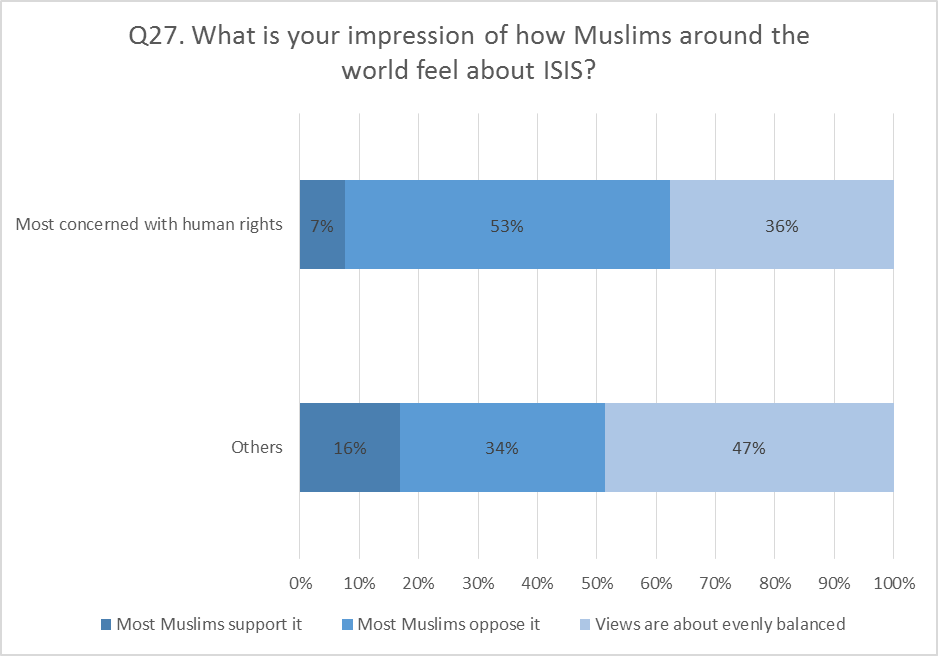 On the right, we also find a clustering of views that are not necessarily causally linked. For example, Americans who would favor sending ground troops to fight ISIS are also much more likely than their counterparts to think that most Muslims support ISIS (20% vs. 9%, respectively), and are somewhat more concerned that Americans would join ISIS and carry out attacks on American soil. Those who support sending ground troops to fight ISIS also tend to hold more hardline attitudes toward the Israeli-Palestinian issue. If a two-state solution were not possible in the conflict, 14% would support Israeli annexation of the Palestinian territories without equal citizenship for Palestinians, versus only 8% of those who oppose sending ground troops. They also tend to favor Israel’s Jewishness more than its democracy, with 32% favoring its Jewishness versus 18% of their counterparts. Perhaps most telling is this: Of the people who favor sending ground troops to fight ISIS, 46% want the United States to lean toward Israel when mediating the Israeli-Palestinian conflict—compared to 21% among those who oppose sending ground troops. These numbers suggest that support for Israel is part of this cluster of ideologies, along with attitudes toward Muslims and support for military excursions in the Middle East. Each idea reinforces the other, with no clear start and end point of causality. 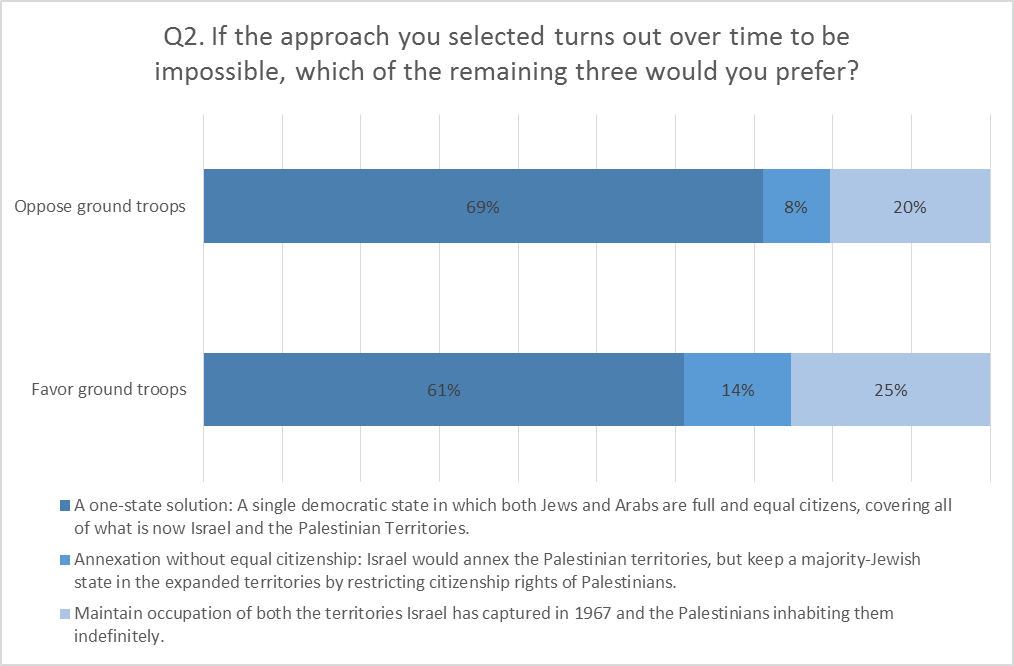 Of course, the prisms through which the public sees policy issues aren’t purely intellectual or subjective, but almost always have a basis in a shared community as well as a media component that reinforces and broadens attitudes. Nor are these prisms necessarily focused on calculating American interests: Those Americans who identify themselves as evangelical or born-again Christians tend to want the United States to lean toward Israel and say that the biggest driver of that position is not American interests but religious convictions—in marked contrast with rest of population, including Jewish Americans.

Second, specific issues that rank very high in public perceptions can themselves provide prisms for evaluating other subsidiary issues. For example, opposition to fighting Asad is partly connected to the overriding fear of ISIS, coupled with the assessment of a majority of Americans that the Syrian opposition is simply incapable of defeating both ISIS and the Asad regime, even with much more support from the United States. Of course, there are other reasons for opposing war with Asad, and many—maybe most—Americans are opposed to any new war in the Middle East; but the robustness of these attitudes across party lines is better explained with reference to the public’s issue ranking.

Another example can be found when the poll asked directly about the connection between Israeli-Palestinian violence and support for ISIS. Here, too, the results were consistent across party lines. Overall, 64% of respondents (71% of Republicans, compared to 60% each of Democrats and Independents) say that escalation of the Palestinian-Israeli conflict is likely to be used by ISIS to draw more support and to focus attention on confronting Israel and the United States. Meanwhile, 30% say support for ISIS is unaffected by the Palestinian-Israeli conflict. 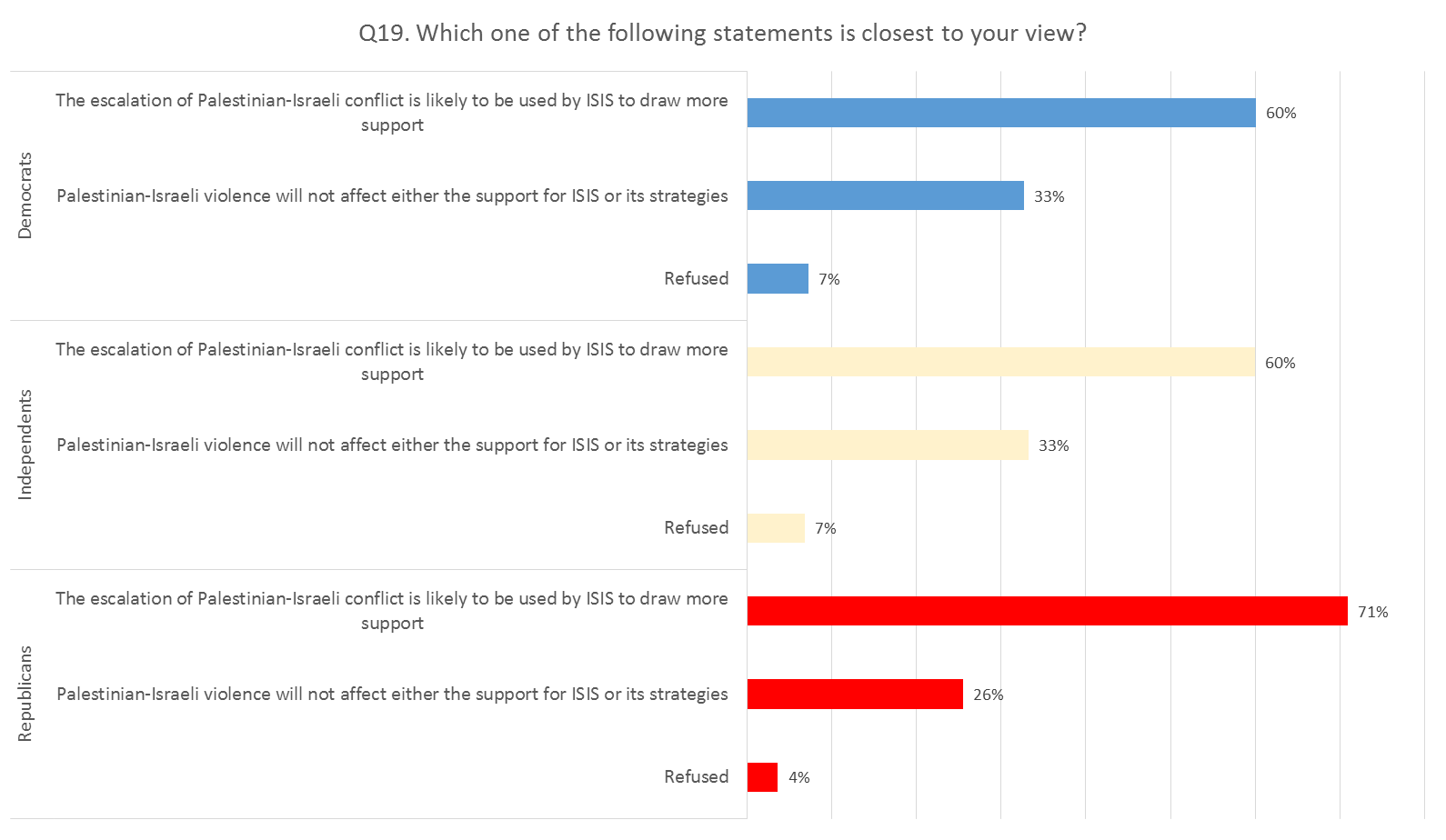 As with other countries and regions, the best starting point for the study of public opinion is investigating the public’s core identities, or worldviews, that help inform their attitudes. These must of course be assessed in the context of changing events, but events alone cannot explain attitudes. While we have provided some examples, it’s a tough business identifying appropriate clusters beyond political party. Here we focused on a human rights cluster and a general outline of a cluster on the right. In an earlier article, we also highlighted ethnic and religious groups. It’s all part of a complex and changing portrait of changing American public attitudes.

This article originally appeared on Lawfare.