I calculate the month-over-month change in total nonfarm payrolls, seasonally adjusted by the 3×9 filter, for the most recent month. The corresponding data as published by the BLS are shown for comparison purposes. According to the alternative seasonal adjustment, the economy added 286,000 jobs in June (column Wright SA), almost identical to the official BLS total of 287,000 (column BLS Official).

Data updates released today for prior months also reveal some differences between my figure and the official jobs gains from prior months. The official BLS numbers for May were revised down from 38,000 new jobs to a dismal 11,000. My alternative adjustment shows that the economy actually lost 6,000 jobs in May, down from 17,000 jobs gained at the time of the release. [i] The discrepancies between the two series are explained in my paper.

In addition to seasonal effects, abnormal weather can also affect month-to-month fluctuations in job growth. In my paper “Weather-Adjusting Economic Data” I and my coauthor Michael Boldin implement a statistical methodology for adjusting employment data for the effects of deviations in weather from seasonal norms. This is distinct from seasonal adjustment, which only controls for the normal variation in weather across the year. We use several indicators of weather, including temperature and snowfall.

We calculate that weather in June brought up the total by 25,000 jobs (column Weather Effect), but this should be considered a transient effect. Our weather-adjusted total, therefore, is 262,000 jobs added for June (column Boldin-Wright SWA). This is not surprising, given that weather in June was in line with seasonal norms.

It’s good to see the jobs numbers rebounding this month. The May number was somewhat affected by the Verizon strike. Also, it is important to remember that pure sampling error in any one month’s data is large, and that could explain part of the weak employment report for May. Averaging over the last three months, employment is expanding by about 150,000 jobs per month—a healthy pace, although a bit of a step down from last year. 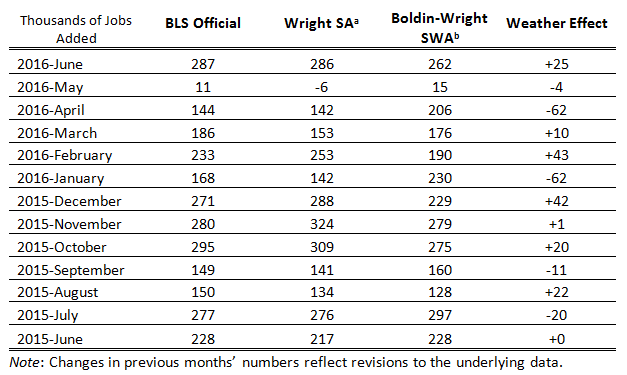 a. Applies a longer window estimate of seasonal effects (see Wright 2013). The June 2015 to May 2016 values in this column have been corrected to remove a coding error that affected the previously reported values.

b. Includes seasonal and weather adjustments, where seasonal adjustments are estimated using the BLS window specifications (see Boldin & Wright 2015). The incremental weather effect in the last column is the BLS official number less the SWA number.

[i] Note that, due to a small coding error, my alternative seasonal adjustment for May, at the time of the release, should have been 17,000 new jobs, not -4,000, as was reported in my previous post. In addition to the underlying data revisions, and correcting for this error, the revised alternative seasonal adjustment for May is -6,000 jobs added (second row of column Wright SA).