Employers added 162,000 jobs in July, according to today’s employment report from the Bureau of Labor Statistics, and the unemployment rate edged down to 7.4 percent. Job gains were led by increases in employment in the private service-providing sector, which added 157,000 employees, as they have been since the start of the recovery. In contrast, job gains for employers in goods-producing sectors, including manufacturing and construction, have remained low, and government employment, which has fallen considerably since the onset of the Great Recession, has continued to trend down over the last three months. The broadest measure of employment—the employment-to-population ratio—remained at 58.7 percent, slightly above its level a year ago, but within the range that has prevailed over the last three years.

Immigration remains one of the most important labor-market issues facing federal policymakers. It has also been an area of focus for The Hamilton Project, which previously examined the economics of immigration reform and more specifically, how immigration has impacted U.S. wages over the last several decades. While the House of Representatives continues to study the issue, the Senate recently passed a bill, S.744, that can serve as a starting point for understanding what immigration reform could mean for American workers.

In this month’s employment analysis, The Hamilton Project explores how future immigration trends could impact American wages, using the targets set in the recently-passed S.744 as a signpost. Specifically, we parse the Congressional Budget Office’s estimates of the future flows of immigrants under new and changing visa categories into higher- and lower-skill groups, and then estimate the impact of these new immigrants on the future wages of American workers. We also continue to explore the nation’s “jobs gap,” or the number of jobs needed to return to pre-recession employment levels.

The Effect of Immigrants on The Wages of U.S.-Born Workers

How immigrants impact the wages of U.S.-born workers depends on whether immigrants and U.S.-born workers compete for the same jobs or, instead, if they complement each other in the labor market. Despite concerns that competition from immigrants might harm employment prospects for native-born Americans, recent economic research suggests that, on average, immigrants raise wages and expand employment opportunities for Americans.

How is this possible? The answer lies in the way that the economy evolves to incorporate immigrants. For instance, less-skilled immigrants working in, say, agriculture, construction, or household services, appear to improve the wages and earnings of Americans by expanding the capacity of American businesses and farms, increasing the responsibility and pay of American foremen and supervisors, and providing expanded opportunities for higher-skilled Americans, particularly women, to pursue higher-paying careers.

Economists find that, on average, previous waves of immigrants tended to boost American wages. In fact, studies have shown that immigration has caused small but positive gains in wages of American-born workers of between 0.1 percent and 0.6 percent between 1990 and 2006. Where the literature divides, however, is in the distributional consequences—how the availability of immigrant labor impacts wages for U.S.-born workers of differing skill and educational levels. A 2007 study by George Borjas and Lawrence Katz found that, from 1980 to 2000, U.S.-born college graduates saw an average wage decrease of 0.5 percent because of immigration, while those without a high school degree saw as much as a 4.8 percent decrease in wages. In contrast, a 2012 study by Gianmarco Ottaviano and Giovanni Peri found positive wage effects across all educational levels between 1990 and 2006.

Of course, these estimates look back on previous waves of immigration. We now turn to projecting the potential impacts of S.744 on future wages.

The skills that immigrants bring with them to the U.S. economy play a crucial role in determining the likely effects immigrants have on the labor market. Among many changes to the current immigration system, S.744 would expand opportunities for immigrants with specific educations and skills. For instance, the bill increases the number of visas available to highly-skilled workers, as well as the number available to less-skilled workers in industries such as construction, long-term care, and hospitality.

The Congressional Budget Office (CBO) estimates that, compared to current law, S.744 would lead to a net increase of approximately 9.6 million people living in the United States by 2023. The figure below shows our estimates of how the 9.6 million fall into various education categories. Those with at least some college education account for about 58 percent of these new immigrants, with college graduates being the most heavily-represented group at 40 percent. Meanwhile, lower-skilled immigrants without a high school diploma also make up a significant portion of the incoming immigrant population. We believe these estimates are the first effort to assess the effect of the bill on the educational composition of individuals who would be allowed to immigrate under its provisions. The technical appendix provides details on these calculations and the assumptions that underlie them, so that it is feasible for readers to assess how alternative assumptions affect these numbers. 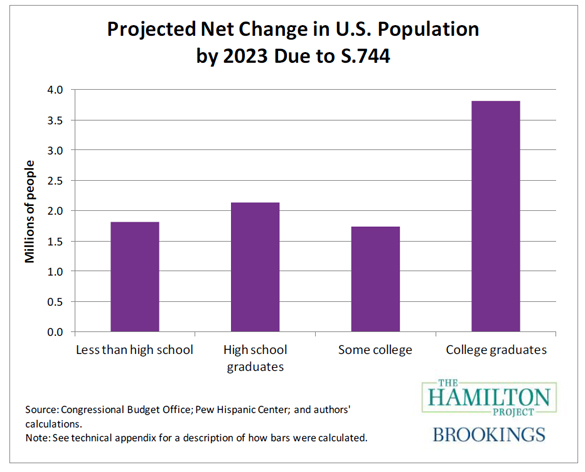 How will the bill affect current Americans’ living standards? Using the Ottaviano–Peri model and an approximate replication of the Borjas–Katz model, we estimate the effect of S.744 on wages for U.S.-born workers by incorporating the estimated flow of immigrants in response to the bill as outlined above.

The figure below estimates the impact of the proposed change in immigrant demographics on wages for U.S.-born workers of differing education levels between 2014 and 2023. 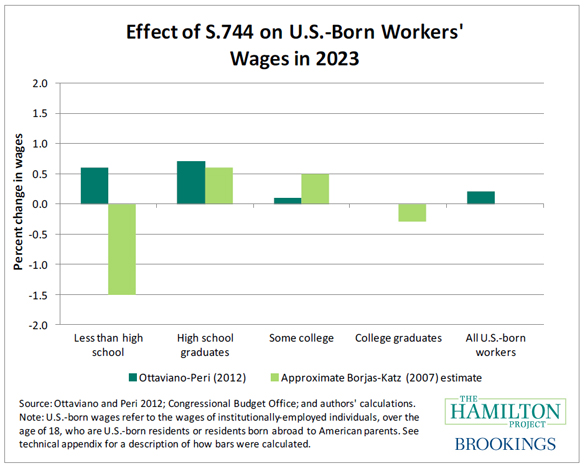 Both models result in the same conclusion: the average impact of immigrants on wages for U.S.-born workers is positive. The wage gain may be small—0.18 percent for Ottaviano–Peri and 0.03 percent for Borjas–Katz—but nevertheless runs counter to the common belief that immigrants generally compete for jobs and bring down wages for U.S.-born workers.

A look at wages of workers by educational backgrounds reveals important heterogeneity. For some individuals—especially those at the lowest and highest educational levels—the models diverge with one predicting small wage increases and the other a small decrease in wages. For example, the Borjas-Katz model predicts a small decrease for U.S.-born workers with a Bachelor’s degree or higher and a 1.5 percent decrease for U.S.-born workers with less than a high school diploma, while the Ottaviano-Peri model predicts roughly no change in wages for college graduates and a small increase among the least educated U.S. born workers. Both models predict gains for high school graduates and people with some college education.

There are other benefits of immigration worth noting, aside from the impact on wages. Specifically, the wage estimates in the previous analysis fail to account for several factors that are likely to increase American living standards but are difficult to quantify. Perhaps most importantly, the wage analysis fails to account for the effect of immigration, especially high-skilled immigrants, on innovation, which is likely to benefit all Americans. Historically, innovation is the most important contributor to the growth in living standards by boosting the productivity of workers and businesses. It is difficult to tease out the precise effects of high-skilled immigration on innovation in the data, however, but the CBO estimates that the productivity of the workforce will be roughly 0.7 percent higher by 2023 and 1 percent by 2033 than it would have otherwise been in those years. Higher productivity would in turn lead to higher wages for workers and higher economic output (GDP) for the economy as a whole. How these increases in productivity will be distributed across education categories is difficult to project, but it seems reasonable to conclude that the estimates in the above figure understate the gains for all education categories.

Furthermore, there is general agreement that immigrants provide two other benefits for the economy that are not reflected in the figure. First, recent research suggests that they improve living standards for Americans and increase purchasing power by lowering the cost of immigrant-intensive services such as child care and other household services. Second, American businesses may benefit from the increased demand that immigrants bring, enabling them to increase production. This could result in the opening or expansion of more stores and restaurants, for example.

As of July, our nation faces a jobs gap of 9.7 million jobs. The chart below shows how the jobs gap has evolved since the start of the Great Recession in December 2007, and how long it will take to close under different assumptions of job growth. The solid line shows the net number of jobs lost since the Great Recession began. The broken lines track how long it will take to close the jobs gap under alternative assumptions about the rate of job creation going forward. 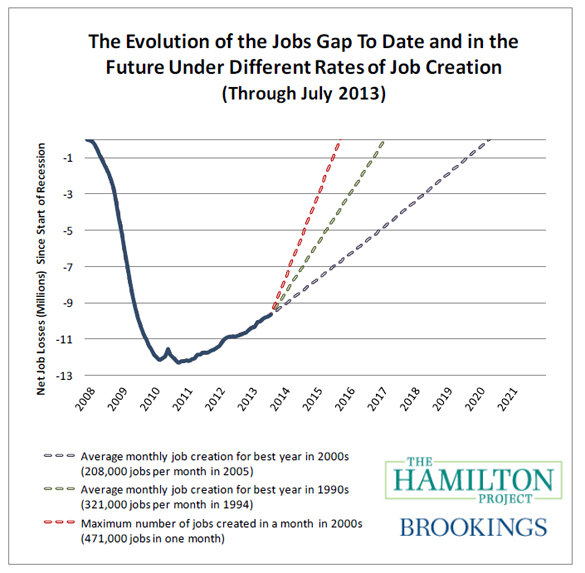 To explore the outcomes under various job creation scenarios, you can try out our interactive jobs gap calculator by clicking here.

Immigration reform remains center-stage among lawmakers and American workers and new evidence can play an important role in ongoing discussions. Our analysis finds that the recently-passed Senate bill would increase the number of college graduates in the labor force by nearly 4 million and also increase the number of lower skilled immigrants. On net, the economics literature suggests that the increase in immigrants will modestly raise the wages of the average American worker just through complementarities between the skills of U.S.-born workers and immigrants. Further, it appears likely that immigrants would increase living standards through several other channels.

Just as S.744 is only the first step towards comprehensive immigration reform, our estimates are also preliminary, and the calculations in this paper necessitated several assumptions and educated guesses. As lawmakers continue to work towards a compromise on immigration, The Hamilton Project will continue its analysis on how that compromise will impact American workers and the economy as a whole.

After the COVID-19 lockdowns, how to fix benefit delivery tech for workers