The pace of job gains slowed last month, according to the Bureau of Labor Statistics. In March, the economy added 88,000 jobs, down from the higher-than-expected gains of 148,000 and 268,000 jobs in January and February, and below the average monthly gain of 169,000 per month recorded over the prior 12 months. The unemployment rate was little changed at 7.6 percent and the fraction of the population with a job edged down. Since March 2012, the unemployment rate has declined from 8.2 percent to 7.6 percent, but much of this decline appears to reflect changes in labor force participation–the fraction of the population employed is unchanged over the year. Over the last twelve months, the private sector has added roughly 2 million jobs; in contrast, employment in state, local, and federal governments has declined by more than 75,000.

Reducing unemployment and building the foundation for a more robust job market are just two of the challenges facing policymakers at every level of government. But given today’s austere budget outlook, the resources available to address the nation’s most pressing problems—from recidivism to school readiness to obesity to workforce development—are shrinking. Indeed, continuing to make progress on these social issues necessitates producing more value with each dollar that the government spends. The solution is to take advantage of the tremendous opportunities for using data and evidence to identify the highest-payoff uses of taxpayer dollars.

One area where better use of evidence could significantly improve outcomes for many individuals is workforce training programs. Covering a wide range of fields—from information technology to healthcare to auto repair—these programs offer the prospect of boosting incomes, increasing employment, and improving the nation’s productivity. Too often, though, these benefits go unrealized, largely because prospective trainees have little access to the information and guidance necessary to make well-informed decisions. These lost opportunities are especially poignant in the current environment of elevated unemployment.

In this month’s employment analysis, The Hamilton Project explores how policymakers can better gather and disseminate evidence on worker training programs to help displaced and low-income workers determine which programs can help them find employment and increase their earnings most effectively. We also continue to explore the “jobs gap,” or the number of jobs that the U.S. economy needs to create in order to return to pre-recession employment levels.

The Potential of Training Programs

Education, in some form or another, has always been the key to the American Dream, as the development of new skills—paired with hard work and good fortune—leads Americans to better jobs and increased prosperity. For some, these skills are gained in primary and secondary school and culminate in a four-year college degree. But many others, particularly students pursuing career or technical training, obtain important education and skills at community colleges or through other workforce development programs that can help them secure a good job.

Indeed, for some workers, the benefits of worker training programs are large. The chart below, which draws on cutting-edge research and data systems from Florida, shows that students who complete two-year degrees in high-return fields, or who complete two-year programs that lead to four-year degree programs, earn more than $35,000 per year after graduating. Students who receive certain career-oriented certificates earn similar salaries. 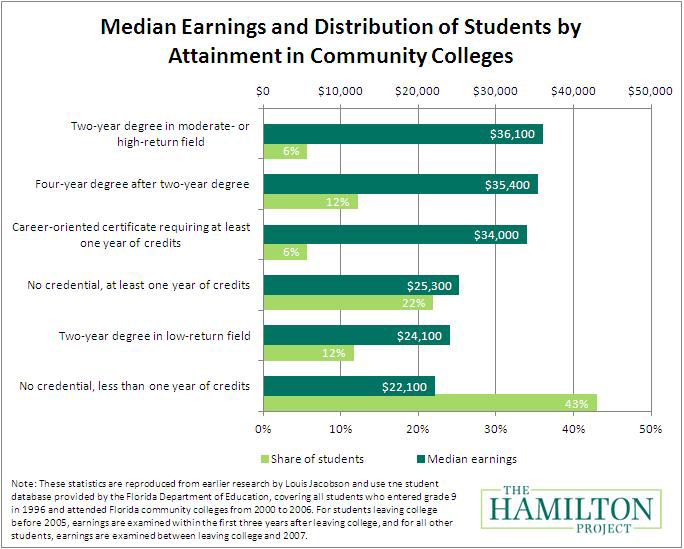 But these positive outcomes are too often the exception rather than the rule. Students who complete low-return programs or who drop out before finishing a degree earn 33 percent less than their counterparts in high-return programs. The median salary for those who complete two-year degrees with low returns is a mere $24,100. As the light green bars in the figure above show, the vast majority of students fall into these lower-earning categories. More than 40 percent take less than a year of credits before leaving school, almost a quarter spend more than a year in community college before dropping out without a degree or certificate, and another 12 percent complete a degree in a field that does not lead to a good-paying job.

What is most concerning about these results is that the qualifications of many of these students are similar across the groups. Many, for example, have comparable high-school GPAs and work experiences. Yet too many end up in programs that they are unlikely to complete, or complete programs that are unlikely to raise their earnings. And furthermore, even more workers who could benefit from training fail to enter programs at all because they are unsure of the potential benefits. The result is that the economic opportunities of training for these workers are not adequately realized.

Developing and disseminating information on the effectiveness of various training programs, and helping prospective students use that information in their decision-making, are important parts of the solution. Today, prospective students make their enrollment decisions without knowing whether they are likely to succeed within a particular program, or whether they are likely to find a good-paying job in that field after completion. Gathering the information necessary to help students make better choices and guiding trainees to more appropriate courses of study could help increase the returns students realize on their investments of time and money.

As of March, our nation faces a “jobs gap” of 10.1 million jobs. The chart below shows how the jobs gap has evolved since the start of the Great Recession in December 2007, and how long it will take to close under different assumptions of job growth. The solid line shows the net number of jobs lost since the Great Recession began. The broken lines track how long it will take to close the jobs gap under alternative assumptions about the rate of job creation going forward. 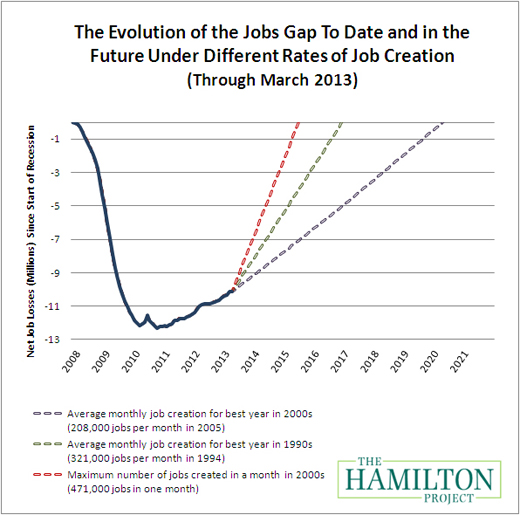 To explore the outcomes under various job creation scenarios, you can try out our interactive jobs gap calculator by clicking here.  You can also view the jobs gap chart for each state here.

Workforce development programs are just one example of how the use of evidence in policymaking can create government programs that more effectively serve the American people. Evidence-based policymaking allows lawmakers, in essence, to do more with less. While this is especially important in today’s era of tight budgets, a key goal of government—regardless of the fiscal climate—is always to achieve the most social good with taxpayer dollars.

To that end, The Hamilton Project, in partnership with Results for America, will host an event and release two new proposals on April 17th focusing on the importance of evidence in policymaking. A new paper by Louis Jacobson and Robert LaLonde provides a roadmap for using evidence to guide students to higher-return training programs that could vastly increase the economic benefits of career and technical education. A second proposal by Jeffrey Liebman discusses how the federal government can adopt strategies for more effective evidence-based policymaking across the board. The event will also feature a roundtable discussion with Senators Rob Portman (R-OH) and Mark Warner (D-VA), Chairman of the President’s Council of Economic Advisers Alan Krueger, and former U.S. Treasury Secretary Robert E. Rubin on the importance of evidence in driving public dollars toward policies that work.

The full agenda for the event can be found here.  For more information about the event and new papers, follow us on Twitter @hamiltonproj and join the conversation using #evidenceworks.