Employers added 238,000 workers to their payrolls in February, the 29th consecutive month of job gains. Over the past six months employers have added 187,000 jobs a month, a rate of gain that is fast enough to reduce the ranks of the unemployed. The unemployment rate, which is calculated using a different survey, dropped to 7.7% in the month, its lowest level since December 2008.

As has been the case for most of the past year, the employer survey offers a brighter picture of progress than the Labor Department’s household survey. Reported job gains in the household survey were only 170,000 in February. An important reason the unemployment rate fell 0.2 percentage points in the month is that the number of adults who are employed or looking for work fell 130,000. Over the past year, the household survey shows that the labor force participation rate has declined 0.4 percentage points. Part of the decline is traceable to the aging of the population. A large number of workers in the Baby Boom generation are reaching retirement age each month, shrinking the percentage of adults who would be expected to work. Since the end of the last economic expansion in December 2007, the participation rate has fallen 2.5 percentage points. About half the decline is due to an aging population. The other half can be traced to a discouraged worker effect. The weakness of the job market discourages some adults from joining the workforce and induces others to give up their search for a job.

Nonetheless, employers continue to report sizeable gains in their payrolls. As has been the case since the labor market recovery began, all the gains have occurred in the private sector. In fact, the number of workers on government payrolls shrank in February. Notable employment gains were seen in professional and business services (+73,000 jobs), construction (+48,000), and retail trade (+24,000). The improvement in construction employment is especially encouraging because that industry has experienced very little net employment growth since the low point of the recession. In the past four months, seasonally adjusted job gains have averaged 34,000 a month.

The health care industry continues to add to its payrolls. In 2009 through 2011 health care payrolls increased about 20,000 a month. Last year they rose nearly 27,000 a month, and they have continued to increase a healthy clip so far this year. The job gains in health care appear strong in contrast to anemic payroll trends in most other industries. However, the payroll numbers show there has been a long-term slowdown in the pace of job gain in the health sector. Whereas health care payrolls climbed 2.7% a year between 1991 and 2007, they have only grown 2.0% a year since the end of the last economic expansion.

The household survey offers a mixed picture of the current state of the unemployed. The broadest measure of unemployment, the so-called U-6 measure which accounts for workers on involuntary short hours and discouraged workers who remain marginally attached to the labor force, fell to 14.3% in February, its lowest level since January 2009. However, both the average and median duration of an unemployment spell in progress edged up in February, mainly because of an increase in the number of unemployed workers reporting they were in long unemployment spells. 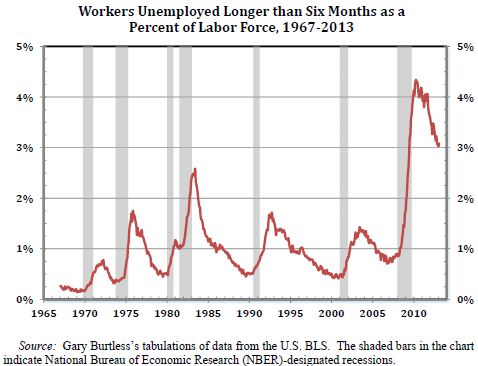