Economic development benefits communities through job growth, higher standards of living and improved subjective well-being. Fiscal capacity—which allows governments to deliver programs and services such as health care, education, workforce development, and law enforcement—is also a product of growing economies. As a result, state and local governments use an artillery of public finance tools such as subsidized borrowing and tax incentives to spur development. Consistently overlooked and largely underappreciated, the responsibilities of tribal governments mirror those of state and local governments. Yet, unlike these sub-national governments, tribal governments face hurdles when accessing even the most basic forms of public finance tools. This lack of parity is especially harmful today, as recent research shows that the COVID-19 pandemic has crippled tribal government revenues and disproportionately impacted American Indian and Alaska Native age-adjusted mortality and prime-age employment. In this short article, we summarize three distinct ways in which tribes have been shut out of tax-based economic development tools that are readily available to state and local governments.

State and local governments use sizable amounts of tax-free debt obligations (i.e., municipal bonds) to supply public goods such as highways, bridges, and parks, along with private goods such as hotels, golf courses, and sports stadiums. In addition, these governments can issue non-taxable private activity bonds,[1] which let the benefits of low-cost borrowing flow directly to the private sector—provided that these bonds are used on specific projects such as airports, educational facilities, and affordable rental housing. These bonds benefit the public by building economic infrastructure without raising taxes.

For decades, however, tribes have been effectively shut out of the ability to issue both non-taxable government bonds and private activity bonds. Starting with the passage of the Indian Tribal Government Tax Status Act in 1982, which was later amended in 1987, the U.S. tax code restricts the use of non-taxable tribal government bonds to only “essential government functions.” This effectively narrows the set of eligible projects to those typically financed by states through tax revenues, and it prohibits the use of tribal private activity bonds. (The lone exception was for the construction of manufacturing facilities.) These restrictions are especially onerous on tribes since, unlike local governments, tribes cannot levy property taxes on land held in trust and, as a result of Supreme Court rulings, even when land is owned privately on a reservation, property tax revenues flow to local governments. 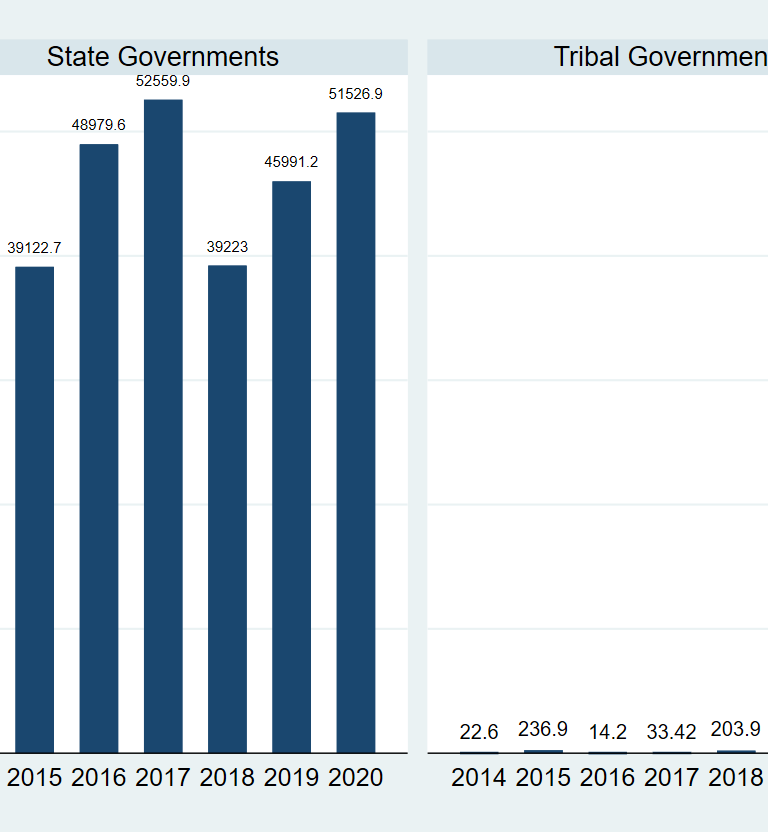 The lack of involvement in tax-exempt bond finance is not because of the lack of potential investments in Indian Country. In fact, as part of a Great Recession-era stimulus package, the federal government ran a pilot program, called the Tribal Economic Development (TED) bonds program. This gave all federally recognized tribes access to a national cap of $2 billion to issue tax-free debt obligations in the same manner as states and local governments. Thus, for the first time since the 1980s, tribal government could issue tax-exempt bonds to incentivize much-needed investments in infrastructure on reservation lands without the requirement of passing the essential governmental functions test. The essential governmental functions test was waived for tribal tax-free bond financing, and private activity bonds for non-gaming projects were made available to tribes. Not surprisingly, the allocation pool has been effectively exhausted, which highlights the need for greater tax parity between states (and other sub-national sovereigns) and tribes. The permanent wavier of the “essential government functions” standard for tribal governments even has support from the Treasury Department, which—as part of a program evaluation of the TED program—recommended its repeal 10 years ago.

Unless this standard is eliminated or the TED program is expanded, tribes will continue to face different standards to access the tax-exempt bond market.[2]

Tribes and states are often pitted against each other when taxing non-tribal activity within reservation boundaries. If left unchecked, both sovereigns can levy taxes on the same activity, which will effectively deter any economic development. This situation is referred to as double taxation. One practical solution is for tribes and states to enter into tax agreements called state-tribal tax compacts, where both governments agree to set a single tax on non-tribal activity within reservation boundaries and share in the revenues.

For tribes, these agreements provide benefits and disadvantages.[3] The advantage of tax compacts is that essential revenues from non-tribal economic activity within reservation boundaries are distributed back to tribes. The consequence is that states often set the negotiated tax rate to the state’s sales tax. As a result, if a state chooses to lower their sales tax without tribal consent, two problems may arise: (1) tribal tax revenues may decline, and (2) tribal loans tied to revenue generated from compacts will become inherently unstable. In addition, when the on-reservation tax rate mirrors that of the state’s, tribes lose their ability to use taxes as entitlements for development.

The monthly jobs report ignores Native Americans. How are they faring economically?

Energizing Navajo Nation: How electrification can secure a sustainable future for Indian Country

While state and local governments spend close to $50 billion annually in tax incentives that comprise of, among other things, property tax abatements and job creation tax credits, tribal governments are forced to utilize a smaller set of tax tools, if any. A logical solution, as emphasized in a recent report by the Treasury Tribal Advisory Committee, is to acknowledge that tribal sovereignty predates the sovereignty of the United States and allow tribes to be the sole tax authority within their reservations.

While the barriers to fully utilizing subsidized financing and tribal tax incentives are idiosyncratic in nature, they all share a similar theme: Each barrier is the consequence of an infringement on the inherent sovereign rights of tribes. Until we resolve the diminishment of tribal sovereignty, tribal governments will continue to navigate through these structural barriers looking for second-best solutions. These tribal constraints to public financing instruments—which are imposed on tribes by the federal government—affect the ability to govern and provide public goods, widely recognized as a fundamental barrier to development.

Matthew Gregg has conducted research on a wide range of topics within tribal economic development and published work on historical development, Indian removal, land rights, and agricultural productivity. Matthew is a member of the Association for Economic Research of Indigenous People.

[1] Private activity bonds (PABs) are tax-exempt bonds issued by state and local governments on behalf of private entities as long as they serve a “qualified project” such as those mentioned in the article (airports, educational facilities, and rental housing). Technically, these tax-exempt bonds are sold by state and local governments in the bond market and the proceeds from the sale are used to make low-cost loans to private entities. Hence, the term “private activity bonds.” Each state can issue PABs up to its volume cap, which varies by state and is based on their population.

[2] To place the size of the TED program’s volume cap in perspective: Since the passage of the TED program in 2009, state and local governments have issued a total of $189 billion (in inflation-adjusted, 2009 dollars) in private activity bonds alone.

[3] The pros and cons of entering into a tribal-state tax compact can be seen in Blackfeet Nation–Montana Tobacco Tax Agreement. In this agreement, taxes are set by the state, rather than the tribe, but remitted back to the tribe. For a more comprehensive list of the characteristics of many tribal-state tax compacts, see recent research by Mark Cowen at Boise State University.