Ukraine’s black soils are legendary, yet average productivity remains lower than many other European countries with less fertile soils. Why is Ukraine not fully leveraging its comparative advantage in agriculture? The answer lies in the administration of the country’s farmland. Today, more than 25 percent of the farmland is still in state hands—10.5 million ha of 40.9 million ha of agricultural land with about 8 million ha being arable land. By comparison, Germany’s total arable farmland is about 12 million ha, and in Switzerland it is just a fraction of Ukraine’s with about  500 thousand ha.

Although land of previous collective farms has been privatized 15 years ago, a moratorium on farmland sales and the large portion of the country’s state land significantly constrain growth potential. The policy also undermines agricultural development perspectives and trust in state land administration and the government’s commitment to create competitive and transparent land markets for land owners, local communities, and investors. Today, Ukrainian producers mainly lease the land. Belarus and Ukraine are the last countries in Europe where farmland sales are prohibited.

Many would perceive the lifting of the moratorium and the privatization of the state farmland as a signal of commitment to reform. It would create a transparent and competitive land market for the benefit of the people of Ukraine.  Transparent and competitive land markets would have major economic and social implications and benefit Ukraine by: (i) attracting finance and investment; (ii) stimulating necessary institutional and administrative change to fight large-scale corruption; (iii) and helping 7 million small land plot owners to use their constitutionally guaranteed property rights. 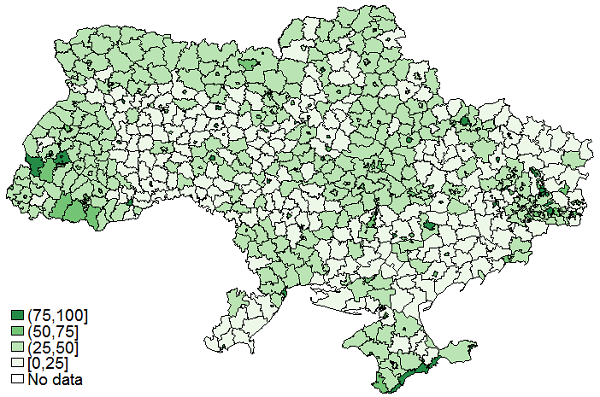 Source: Nivievskyi, Nizalov based on date of the State Service for Geodesy, Cartography and Cadaster; figures indicate the range of state land in percent of all farmland per district

Land leasing prices are at a level of about $75 to $150 per hectare for new contracts. Assuming that the unregistered land would be registered and land use rights would be auctioned, then significant additional revenues of around $1 billion would be available even without state farmland privatization. This would largely be sufficient to cover the costs to complete the nationwide electronic land registration and cadaster.  It is evident that further state farmland privatization auctions would double or triple this amount of additional State income.

The state could consider limiting its role in farmland markets to a narrowly defined mandate: (i) allowing sufficient competition and transparency by ensuring potential buyers and sellers have the maximum amount of information; (ii) ensuring efficient functioning of support systems and institutions to reduce administrative costs of land transactions; and (iii) ensuring equity, fairness, and protection of property rights through effective appeal and dispute resolution mechanisms.

The economic costs and benefits of state farmland reform should be assessed by independent experts. Economists and farmers would easily agree that farmland should be used by those who make the best use of it. The lack of transparency and commitment to develop dynamic farmland markets reduces development perspectives for farmers, land owners, and local communities. It also limits the development of financial instruments, including mortgage lending. Careful consideration of farmland reform is the most important step for a strong and sustainable agricultural sector and a convincing signal to the Ukrainian people and international partners that Ukrainian leaders are committed to reform.

Corruption in utility bailouts hurts ratepayers and the planet