Creating a seamless European market—the so called “Single Market”—is a top priority of the European Commission. It is a continuous effort to more towards an effective union—one in which people, capital, goods, and services move freely, and ultimately boosts prosperity. However, there is still considerable effort needed to introduce structural changes to remove the remaining barriers hampering the performance of the Single Market.

The European Commission is trying to make life easier for businesses in the EU, at least as far as unnecessary regulation and investment barriers are concerned. Yet, for a single Market that prides itself as the premier place to do business there are stark differences within the union. The World Bank’s new EU Regular Economic Report draws on Doing Business 2016 to highlight some of the differences across Europe.

EU strives to be ‘best in class
’


By global comparisons, the EU is a good place to do business. Rapid technological developments, open and expanding global markets, and ever-increasing access to information mean that regulation is under constant review and is being adapted to keep pace. Indeed, EU member states have been improving regulations and, on average, rank 31st among 189 economies. One-third of the top 20 countries in the world for Doing Business are European, and practically all EU countries are in the top 50.

Figure 1.  Regulatory environment may be more business-friendly in some areas than in others

Digging into the 10 components that make up the aggregate Doing Business indicator highlights areas where improvements might be made. Each topic relates to a different aspect of the regulatory environment, and indeed, best practices can be found in almost every area in countries across the EU. But in certain areas, other countries around the world are much closer to the best performing “frontier” than the family of EU member states. This is particularly true for regulations protecting minority investors or enforcing contracts, where the EU as a whole is about one-third below the frontier.

Just like when one child excels in sports, but plays a horrible violin, whilst another gets all A grades, but can’t kick a ball, member states also work in the same way. What works well in one country may be less successful in another while strong performance by a member state in one area can also coexist with weak performance in another. Belgium, for example, is almost three-quarters of the way to the best-performing frontier with very open trade and easy processes to start a business; however, at the same time, it is at the lower end for getting credit and enforcing contracts.

The heat map below highlights how countries are performing within the EU. Although there has been a significant improvement in contract enforcement, the average time is still long—about 590 days, compared to less than a year in Lithuania, Luxembourg, and Sweden. There is also scope to reduce the time companies spend in compiling their taxes—over 16 days in Bulgaria and the Czech Republic, compared to less than four days in Luxembourg, Estonia, Ireland, and Finland. 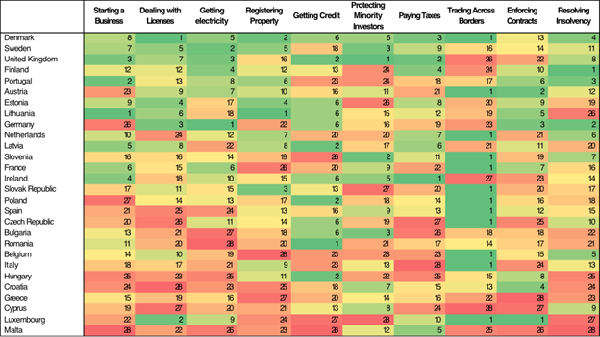 Note: The intensity of the color reflects the rank (out of 28) of a country for an indicator. Colors range from green
—
meaning a strong performance and a high position on the ranking
—
to yellow (average performance), and red (low performance).

Only as strong as the weakest link?

As the EU strives to grow and create jobs, burdensome regulation and fragmentation across member states can compound the challenges. Although good business regulation is not a panacea to all ills, it is a necessary condition to move capital, goods, services, and people freely within its borders. Although differences also exist within countries (for example, see subnational Doing Business measures in Poland and Spain), in general Northern Europe has developed procedures to ensure that rules and regulations support a thriving private sector. This requires regulatory and non-regulatory interventions to be developed and implemented in a smarter way, learning from the very best practices in member states and around the world. The EU’s current drive to improve such shared learning and remove its own red-tape and regulatory bottlenecks cannot be a one-off exercise, but an ongoing and proactive process. After all, isn’t the whole of Europe in this together? We “need more union in our Union” in this area too.

Editor’s note: The author would like to than Isfandyar Khan (@IsfandyarZ) and Theo Thomas (@TheoDavidThomas) for valuable advice and inputs.

The Great Real Estate Reset: A data-driven initiative to remake how and what we build