The vast number of immigrants crossing the Mediterranean recently has been fueling anti-immigrant sentiment across Europe, adding even more challenges to the debate about immigration policies. The difficulty that surrounds agreement on immigration matters is also evident if we look at the current state of the European Union immigration policy; rather than a common policy, it is a collection of 28 migration regimes with marked differences in terms of openness and flexibility.

This is a problem because Europe’s population is expected to age rapidly. And even though immigration won’t solve all of Europe’s economic woes, more open and flexible immigration policies will inject much-needed flexibility and dynamism into Europe’s graying economies. But major hurdles exist, not least in attitudes. Paradoxically, some of the countries projected to gain the most from a boost in working age populations are also overwhelmingly averse to immigrants.

Moreover, it is old people everywhere who oppose immigration the most, across the board (see Figure 1). In every country for which we have data (except Sweden) at least 40 percent of old natives claim to have negative attitudes towards immigrants. In countries such as Hungary or Cyprus that figure is 80 percent. Older natives disproportionately oppose immigration, regardless of income, education and employment status. 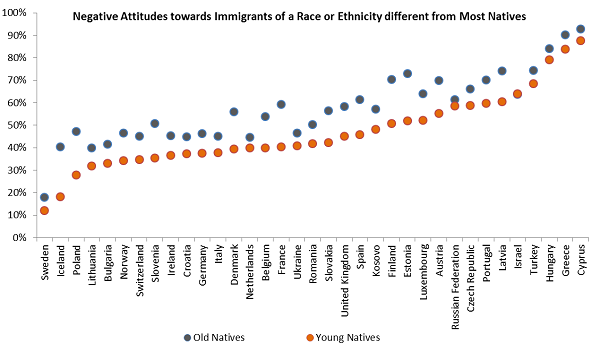 Source: Own estimates based on the European Social Survey 2002-2012. Note: A native is considered to have negative attitudes if he/she thinks that none or few immigrants should be allowed in the country (as opposed to many or some immigrants).

This is paradoxical since older people are more likely than others to benefit from an influx of immigrant workers for four main reasons:

However, there is an interesting twist to the differences in attitudes towards immigrants across age groups, because they are mostly driven by generational changes. When we compare the evolution of attitudes towards migrants throughout the life cycle for groups of individuals born in the same year, we find that in most countries they are quite stable or improve as individuals become older. These results are more consistent with the predictions of economic theories (i.e. if anything, natives should become less averse to immigrants with age). In other words, while the attitude gap between the old and young remains, the importance of generational effects imply that people in all age groups have become more tolerant over the past years.

Yet one question remains: Why is there so much variation in the effect of age on attitudes toward immigrants across countries?

What matters most is if older citizens still work. In countries with an extended retirement age and a higher labor force participation of older workers, natives become less averse to immigrants with age. This result is consistent with empirical evidence (more here, and here) showing that older workers and young and/or immigrant workers complement each other at the workplace and thereby would mutually benefit from the associated increase in earnings.

This means that aging societies may become more—not less—open to immigration as the elderly increasingly represent a larger fraction of the population and newer more cosmopolitan generations replace the current more immigration-adverse generation. Moreover, this trend may be accelerated by changes in the labor market and adult learning, as aging economies move to an active aging growth model—a model where both immigrants and older workers mutually benefit in the labor market.

Europe is aging—it’s high time to invest in youth

Votes are in: Understanding new Italy and Germany