The State of Food Insecurity 2015 report shows that undernourishment in the developing world is falling by about one percentage point every three years. At this rate, in 2030 the world will still have 720 million undernourished people, or 7.9 percent of its population. This is business as usual.

Figure 1. Undernourishment in the developing world 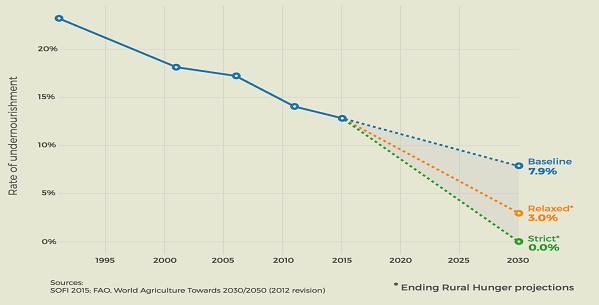 This is the background to the discussion taking place today in Addis Ababa, Ethiopia on investing in rural people and the main reason why the second Sustainable Development Goal (SDG2), “End hunger, achieve food security and improved nutrition, and promote sustainable agriculture” is so critical. The SDG also reminds us that we are not only concerned about undernourishment, but also about malnutrition, agricultural productivity, and the implementation of sustainable, inclusive, and resilient agricultural practices. In doing this, the new sustainable development agenda goes well beyond the expiring Millennium Development Goals (MDGs) to a broad concept of better food systems, something that the International Fund for Agricultural Development (IFAD) has long promoted. In fact, those at the Third International Conference on Financing for Development  explicitly recognize IFAD’s efforts. This is a nice compliment but also presents a challenge: how can impact be scaled up to meet the more ambitious goals that have now been set?

It is useful to start with one clarification. There are those who argue that ending hunger is a matter of producing more food, and that is best done by large, commercial farms. I think most people agree that a central issue in addressing global hunger is that many rural people and smallholders are unable to access or afford food. There are about 500 million family farms in the world today, supporting around 2.5 billion people. It is clear that even if the long-run development path will imply movement of these people to urban areas and consolidation of their land-holdings into larger farms, this will not happen in the next 15 years. By 2030 most of these 2.5 billion people in family farming households will still be in situ. Rural transformations must support their evolution into more organized, efficient, and sustainable farming at the same time as it promotes large scale agriculture.

Rural transformation is a big and broad concept, but it can be usefully subdivided into four big transformations that need to occur if smallholder agriculture is going to become synonymous with efficient and sustainable family farming and if we are going to be able to achieve SDG 2.

A focus on achieving these four transformations could bend the curve of ending global hunger and achieving food security.

This blog draws on content from a FFD side event on July 14 entitled “Realizing the Vision: Investing in Rural People for Inclusive and Sustainable Transformation,” and moderated by co-editor of the Future Development blog and Senior Fellow and Deputy Director of the global economy and development program at the Brookings Institution Homi Kharas.