In yesterday’s Future Development post, “Mobile connectivity in Africa has already arrived,” Borko Handjiski demonstrated how poor countries are catching up in adopting mobile communication and in some cases even out-performing rich countries in key innovations like mobile money. This is good news for emerging economies and perhaps also a sign that the telecommunications industry in “Northern” countries, especially Europe, has become complacent.

Recently, I had two experiences which made me feel that the old continent has remained stuck in the 20th century. I made a phone call from Munich to Vienna: same time-zone, same language, and about the same distance as between Washington, D.C. and New York City. This 15 minute call cost me a whopping 30 euros. As it turns out, my plan is great for local calls but terrible for “international” communications. On another occasion, I was travelling in the Western Balkans and was looking for my cellphone in my hotel. I used the land line of the hotel to call it hoping to locate it when it rang. Bad luck: the call went straight to my voice mail. I tried it again with equal success: even though each call lasted about 2 seconds, each the bill came to some 15 euros.

Thanks to Skype, one of Europe’s last great inventions in the telecom space, and some low-cost operators, it is now possible to circumvent such rip-offs in long-distance calls. Also, thanks to cellphones and the internet one is no longer hostage to exorbitant fees that hotels charge to call out from landlines. However, if you’ve lived through the telecoms revolutions in Asia and Africa, the state of Europe’s telecom sector still feels very much stuck in another day and age.

While goods, people, and money can flow freely in Europe, the EU’s 28 member states still maintain high walls in the telecom industry. Instead of reaping the benefits of a single market, an average European consumer experiences high roaming and long-distance costs from a large number of operators, and very little innovation is coming to help bridge these barriers: 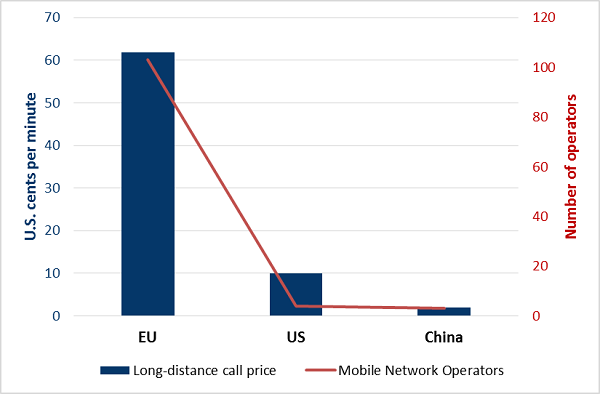 Source: Calculations by Anastasia Shegay based on EU, GSMA, and own research.


However, not all is doom and gloom, especially in Eastern Europe, where countries such as Estonia and Lithuania have leapfrogged. They transformed their telecom sectors and can now offer their citizens high quality and low tariffs. In Lithuania, the breakthrough came with operators’ decisions to replace their copper network with fiber optics instead of continuing to invest in 20th century technology. As a result, today Lithuania is a leader in Europe in terms of access to fiber, and its residents enjoy some of the fastest internet speeds in the world.

In today’s knowledge economy, the availability, reliability, and cost of telecommunication is as important as electricity was for the industrial revolution. Its importance will only grow as the digitalization of life continues. The EU’s common market has generated enormous efficiencies across most aspects of economic life. Paradoxically, the sector which is leading economic transformation in other regions is lagging behind in Europe.

A conversation on international governance reform