After several decades during which Turkey’s per capita income relative to the EU hardly changed, the 2000s saw an (albeit modest) improvement (Figure 1). This led to confident predictions of Turkey’s continuous rise, reflected in the official target of reaching a per capita income of $25,000 by 2023. And yet, in recent years, confidence has given way to doubt as growth rates have moderated. Will Turkey remain trapped in middle-income status? (See me address this topic at a Brookings event here.) 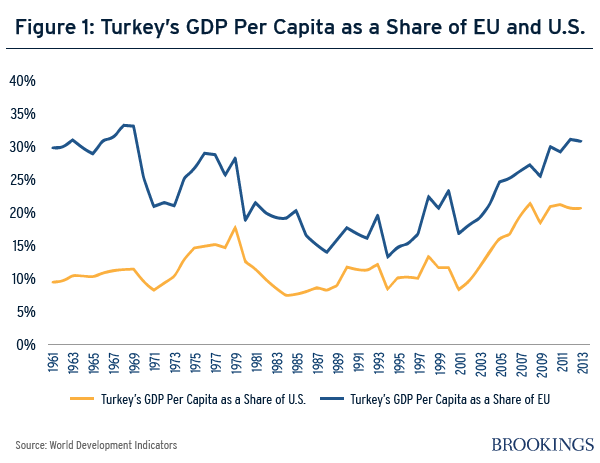 This blog has featured a number of contributions on the “middle-income trap” in recent weeks (see for instance Nguyen, Quah). I can distinguish three broad schools in this growing literature. Some argue that growth at middle income is just a lot harder than at lower income levels, because it relies more on innovation to drive total factor productivity growth and benefits less from the gains of structural change. Others respond that sustained growth spells are not less likely at middle income than at low income, but are still hard to achieve. Successful escapees, they note, share a set of common characteristics and policies which allow them to grow faster at all income levels. A third view maintains that sustained growth spells are by themselves rare and unlikely to persist the longer they last. Policies may stimulate periods of rapid growth, but what distinguishes high-income economies is ultimately a set of institutions that make economies resilient against regime shifts and allow growth to continue uninterrupted over very long periods of time.

So what are Turkish growth pundits to make of it all?

First, as countries get richer, growth rates tend to slow down. Both neoclassical growth models where countries converge to some steady-state growth path and endogenous growth models where followers can benefit from technological diffusion during catch-up can account for this basic fact. Growth episodes should therefore be related to the underlying potential growth rate to see whether a country is really falling behind. Using this criterion, a recent IMF study does not find a single 5-year episode in Turkey during which growth fell significantly below the rate predicted by existing investment rates and lagged per capita income. Using a similar framework, we estimate that Turkey’s growth potential over the coming two decades is around 4.2 percent, or 3.3 percent per capita, enough to get Turkey into high income status. This would seem a reasonable benchmark against which to evaluate Turkey’s growth performance. Faster growth is possible of course, but would require higher investment rates and above historical average increases in total factor productivity.

Second, low and middle-income countries experience a lot more volatility in their growth rates than high-income countries. To “escape” from middle income and join the ranks of the high-income countries, persistent growth over long periods of time is necessary. Turkey is a good case in point. The country is used to wild swings in growth rates, with booms and busts in every decade. The longest period of uninterrupted growth was from 1962 to 1977 and saw average GDP growth of 6.2 percent (3.9 percent per capita). Avoiding another crisis and maintaining macroeconomic stability would seem a lot more crucial for reaching high income than going for growth at any price.

Third, when we look across empirical studies for factors that account for the probability of extended growth spells, or for the probability of growth slow-downs, a few repeatedly stand out. These may be grouped into three broad categories: (1) policy related factors, such as the degree of openness to trade and foreign direct investment, macroeconomic stability, or the quality of the business environment; (2) structural factors, such as demographics, the share of the labor force in agriculture, or the extent of income inequality; and (3) institutional factors, such as the rule of law. Turkey’s record compared to other middle-income countries is mixed on policy, with the macroeconomic policy framework in particular an apparent source of risk. The structural factors speak strongly in Turkey’s favor, as the country is young and has far from exhausted the potential for productive labor reallocations from agriculture. However, neither group of factors points to imminent risks of a growth slow-down.

The real challenge for Turkey, it seems, lies with the creation of the institutional prerequisites of a high-income country. It is not that Turkey performs poorly in institutional quality when compared with other middle-income countries (Figure 2). Rather it is the distance between Turkey and the high-income countries that is noticeable. From all we know about the history in other countries, the transition to high income requires the evolution of rules from those that favor “know-who” to those that favor “know-how.” Turkey started on this transition with major institutional reforms implemented over a decade ago. But for the last 5 years the process has slowed and the reforms remain contested and incomplete. 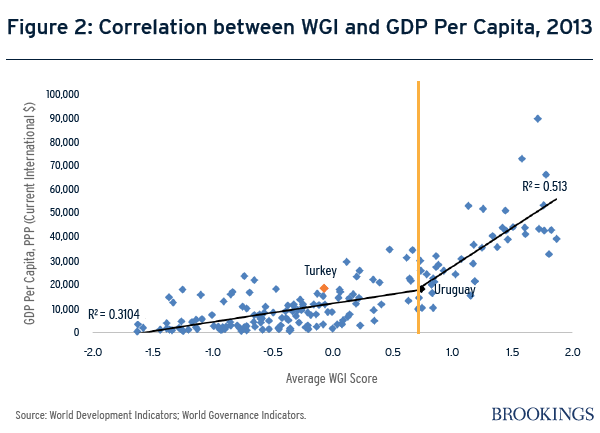 If the middle income trap remains a topic of debate in Turkey (and other middle-income countries) today this, rather than policy related or structural factors, may be the reason. It is time to change that.