Luck has struck the region of East Africa: for a couple of years now, new announcements of natural resource discoveries are being made every few months. Mozambique has found some of the largest natural gas deposits in the world, while Tanzania, Uganda, and Kenya have also discovered gas and oil. Exploration is still ongoing, so even more discoveries could be forthcoming. Luck has definitely struck the region, but the main question is: how will the people in these countries  benefit from this?

In many parts of the world one can find examples of countries where natural resources have brought wealth to the majority of citizens. Oil discoveries turned Norwegians into some of the wealthiest people in the world (though they were quite well off even before the discoveries); Malaysia is about to join the group of “high income” countries and oil has been part of its success story; Qatar and the United Arab Emirates have transformed their oil resources into vibrant service economies, and so on.

The people of the 14 countries of sub-Saharan Africa (SSA) that the IMF characterized as resource-rich have not all been as fortunate as that. In many ways people in the “‘lucky 14” are not better off than other Africans. For example, they have shorter lives: they have a lower life expectancy than people in non-resource rich countries (55 years for those in the lucky 14, versus 59 years for other Africans, according to 2013 data; see Chart). In addition, those without natural resources have achieved more rapid improvement in life expectancy since the beginning of the century!  Another example is that extreme poverty (the percent of those living on less than $1.25 in PPP a day) in the lucky 14 seems to be higher (availability of poverty data is somewhat sketchy). Ironically, one of the richest countries on the continent in terms of GDP per capita, Equatorial Guinea, also has the highest extreme poverty level. Third, people in resource-rich SSA countries have below average education. 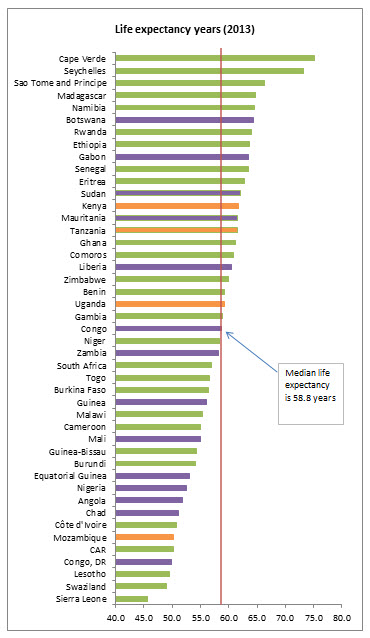 The link from pumping oil to increasing life expectancy and reducing poverty is not direct. The primary channel through which natural resources promote shared prosperity is the budget. Oil revenue flows to government coffers and is to be used for social and infrastructure spending, which in turn decreases poverty, and increases human capital and life expectancy. This is where the link typically breaks, and natural resources end up benefiting just a lucky few. Several global studies point to the fact that natural resources tend to hurt both education spending and economic growth (which in turn supports the above outcomes). Moreover, a recent IMF paper shows that resource rents are likely to lower other tax revenue—lack of pressure on tax collection being one of the reasons— so taxing resources does not necessarily mean more public spending. The above literature does not suggest that resource riches are the only, or the most significant, determinant of the above development indicators. Having said that, there is little doubt that in many of the lucky 14 SSA countries the development outcomes could have been higher if their resources had been better managed. Botswana is Africa’s exception, as it managed its diamond wealth almost “Norwegian style” and used its natural resources to reach the highest life expectancy and lowest poverty among the lucky 14.

Considering East Africa’s newcomers to the list of lucky countries, the main question is not whether their citizens should consider themselves fortunate to have discovered resources underneath their feet—of course they should. More to the point is the question what will determine whether these citizens will actually experience increased wealth from their natural resources? How often other countries have succeeded or not definitely does not matter—just as the odds of hitting a red on a roulette table are the same (48.8 percent) irrespective of previous turns. What does matter is how governments go about managing their natural resources.

In East Africa initial signals have not always been encouraging. The development of oil discoveries in Uganda is taking much longer than average due to prolonged discussions over the construction of a large oil refinery in the absence of a strong economic rationale.  Tanzania’s government is yet to complete its gas master plan—a key element of the institutional framework—for the gas sector, a fact that precludes foreign investors from making their investment decisions. In Kenya, social tensions in the area where discoveries have been made —an area that happens to be among the poorest parts of the country—escalated in 2014, when the local population brought exploratory activities to a halt.

The ball is now in the hands of East African governments. The resources have been (partly) found, investors are keen to invest, and development partners—with the World Bank playing a lead role in several countries—are helping the countries build institutional capacity to manage their new industry. The success factors, including transparency, clear and predictable legislation, an independent regulator, and oversight mechanisms, are well known. What remains is that each of these factors finds its way into the legislation that parliaments enact and into the institutions that are set up and mandated to manage the sector. On that, though 9 out of 10 East Africans today were born after Clint Eastwood’s 1971 cult movie “Dirty Harry” came out on screen, Harry’s words echo in their heads: you’ve got to ask yourself one question… do you feel lucky [that your government will get the most for you out of your natural resources]?