Systematic information on wealth and income disparities in the Arab world is scarce. Evidence from household surveys indicates that economic inequality in Arab countries is relatively low and stagnant Hassine, a result that holds even after correcting for missing observations at the top end of the distribution (see Figure 1, based on data from Lakner and Milanovic, 2013). However, household surveys do not adequately capture household incomes and assets. And income inequality is generally higher than consumption inequality. According to Alvaredo and Piketty (2014), data sources at the national level are insufficient to derive reliable estimates of top income shares in Egypt and other Middle Eastern countries. 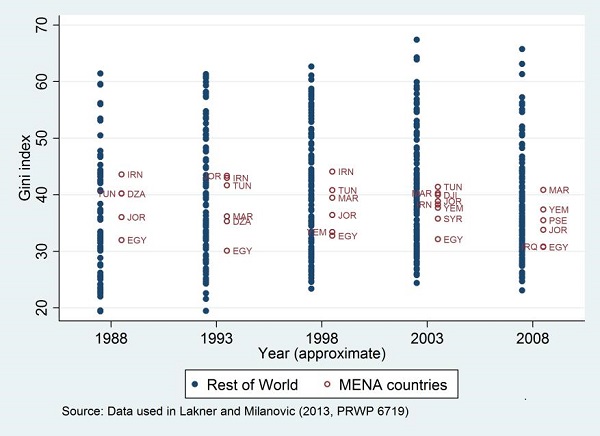 So how can one get a sense of wealth disparities in Arab countries? In the absence of income tax information, data on the net worth of billionaires offers a complementary perspective on wealth concentration. Forbes collects such data, although the list of world billionaires excludes monarchs and those heads of state who have accumulated assets as a result of their position. In the case of Arab countries, this omission seriously biases the numbers, so we have augmented the Forbes data with the personal wealth data on Arab heads of state. These data reveal that in several Arab countries a few billionaires control a much greater share of wealth than billionaires in other countries at comparable levels of development (see Figure 2). Lebanon and Egypt stand out with a few individuals and their families controlling close to 30 percent and 24 percent of GDP. 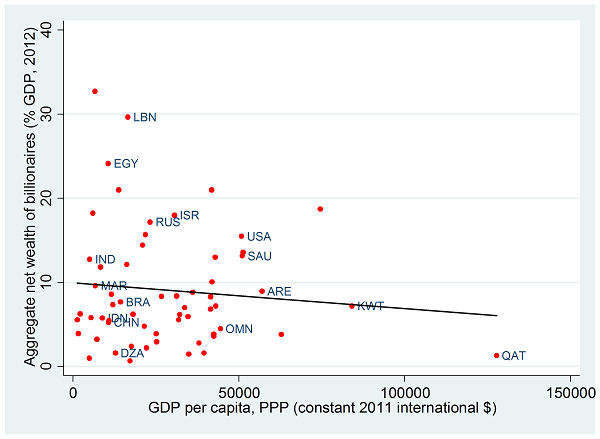 Still, these data underestimate the true concentration of wealth in Arab states. In general, it is unclear what share of rents, derived either from natural resources or political power or both, go to Arab ruling families. A recent paper by Andersen et al. (2013) argues that the rationale for holding political rents in foreign jurisdictions is that it provides secrecy and asset protection. According to their dataset on cross-border banking from the Bank for International Settlements, based on which they construct a measure of hidden wealth, oil-rich autocracies account for nearly 8 percent of global hidden wealth or almost 7 percent of their GDP. By contrast, oil-rich democracies and oil-poor autocracies account for 1 percent and 2 percent of global hidden wealth, equivalent to 0.5 percent and 2 percent of their GDPs, respectively. A large share of this hidden wealth belongs to Arab citizens with connections to the ruling elites, but data on the exact size of their hidden assets are not available.

Finally, the great disparity in wealth in Arab countries can be inferred from corporate data. According to an OECD paper the boards of directors of some of the largest companies in the Middle East and North Africa are made up of mostly government officials or royal family members. The 20 or so largest companies in most Gulf states, Egypt, Lebanon, and Morocco are not listed on the stock exchanges of these countries. Instead, they are either firms privately owned by prominent families or state-owned firms. In short, ordinary people cannot share in the prosperity generated by the corporate sector in these Arab countries.

The author thanks Youssouf Kiendrebeogo for his valuable assistance with data.