On June 23, Brookings hosted the release of the Immigrants, Immigration Reform, and 2016 Election Survey, a joint project with the Public Religion Research Institute (PRRI). The associated report entitled, How immigration and concern about cultural change are shaping the 2016 election finds an American public anxious and intensely divided on matters of immigration and cultural change at the forefront of the 2016 Election.

Dr. Robert Jones, CEO of PRRI, began the presentation by highlighting Americans’ feelings of anxiety and personal vulnerability. The poll found, no issue is more critical to Americans this election cycle than terrorism, with nearly seven in ten (66 percent) reporting that terrorism is a critical issue to them personally. And yet, Americans are sharply divided on questions of terrorism as it pertains to their personal safety. Six in ten (62 percent) Republicans report that they are at least somewhat worried about being personally affected by terrorism, while just 44 percent of Democrats say the same. 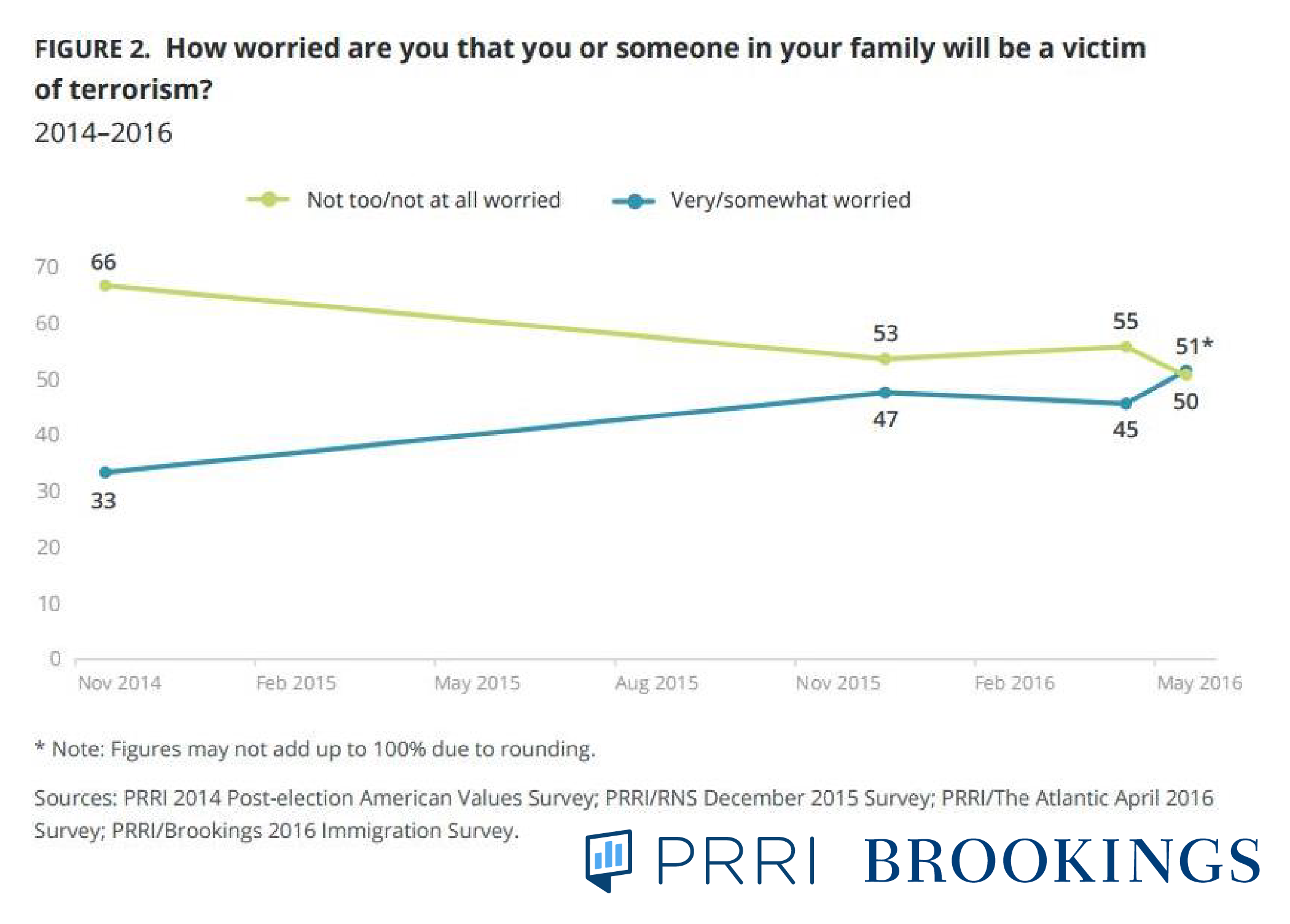 On matters of cultural change, Jones painted a picture of a sharply divided America. Poll results indicate that a majority (55 percent) of Americans believe that the American way of life needs to be protected from foreign influence, while 44 percent disagree.  Responses illustrate a stark partisan divide: 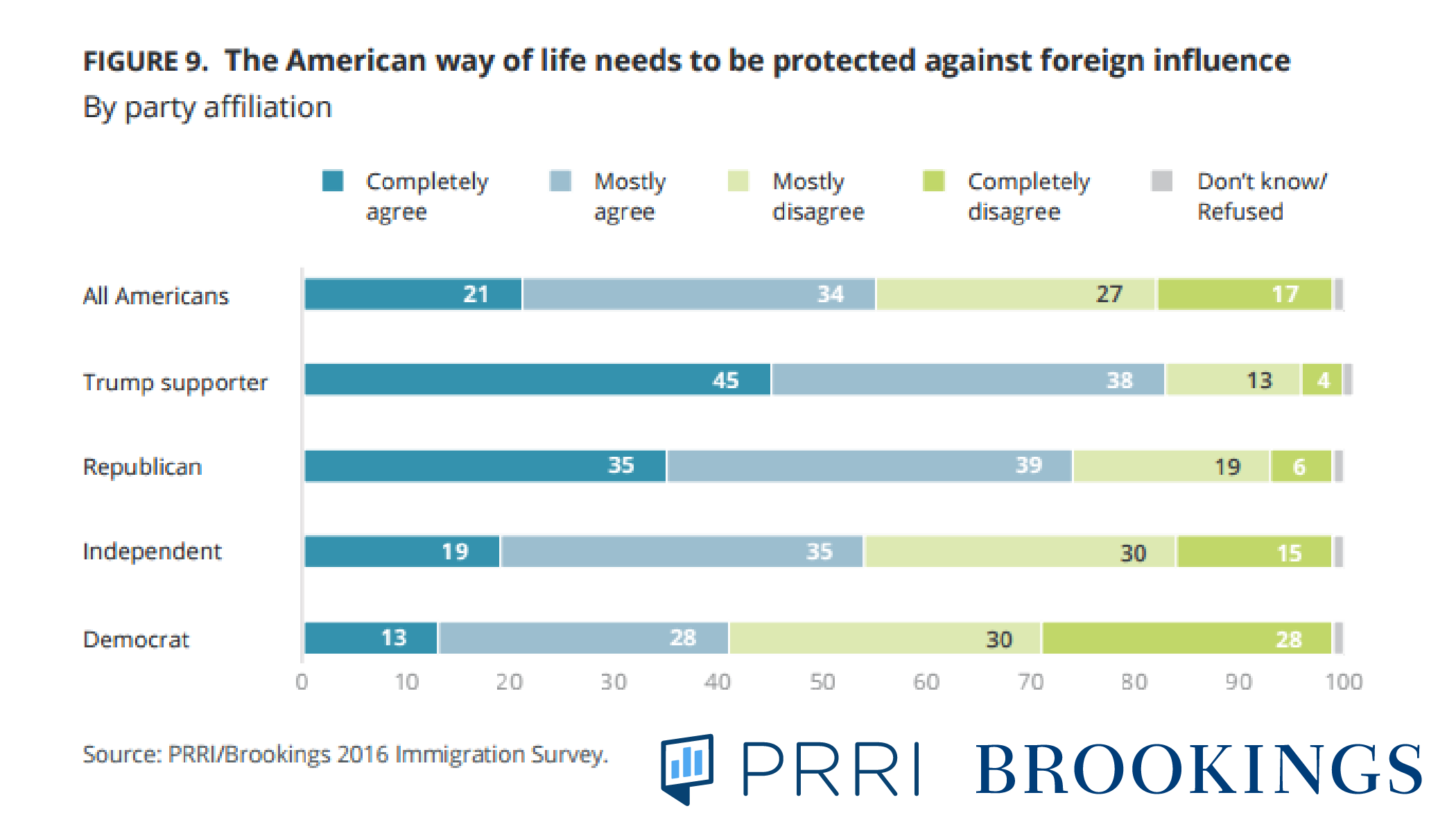 Jones identified Americans’ views on language and “reverse discrimination” as additional touchstones of cultural change. Americans are nearly evenly divided over how comfortable they feel when they encounter immigrants who do not speak English: 50 percent say this bothers them and 49 percent say it does not. 66 percent of Republicans and 77 percent of Trump supporters express discomfort when coming into contact with immigrants who do not speak English; just 35 percent of Democrats say the same. 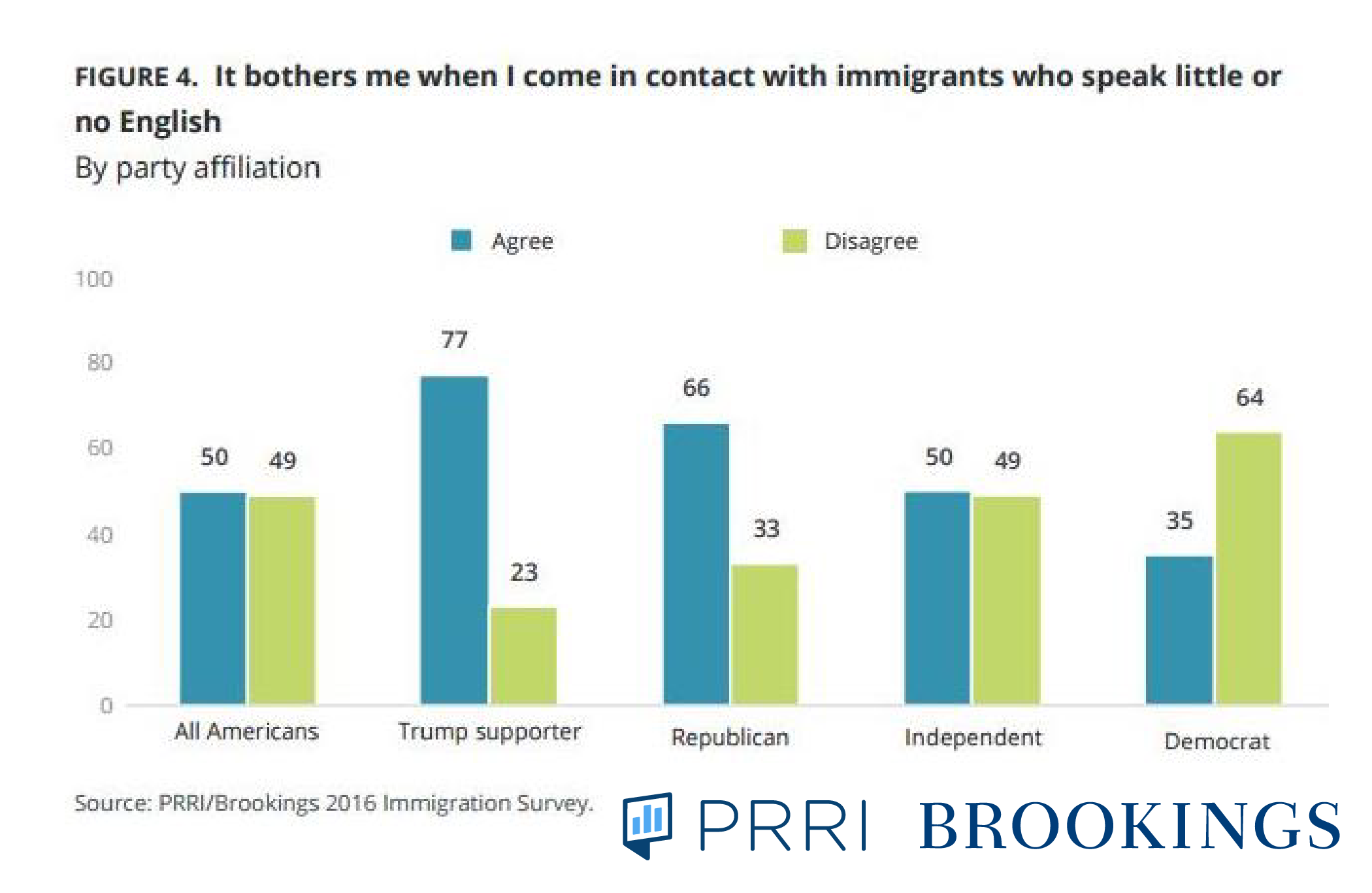 On economic matters, survey results indicate that nearly seven in ten (69 percent) Americans support increasing the tax rate on wealthy Americans, defined as those earning over $250,000 a year. This represents a modest increase in the share of Americans who favor increasing the tax rate relative to 2012, but a dramatic increase in the number of Republicans who favor this position. 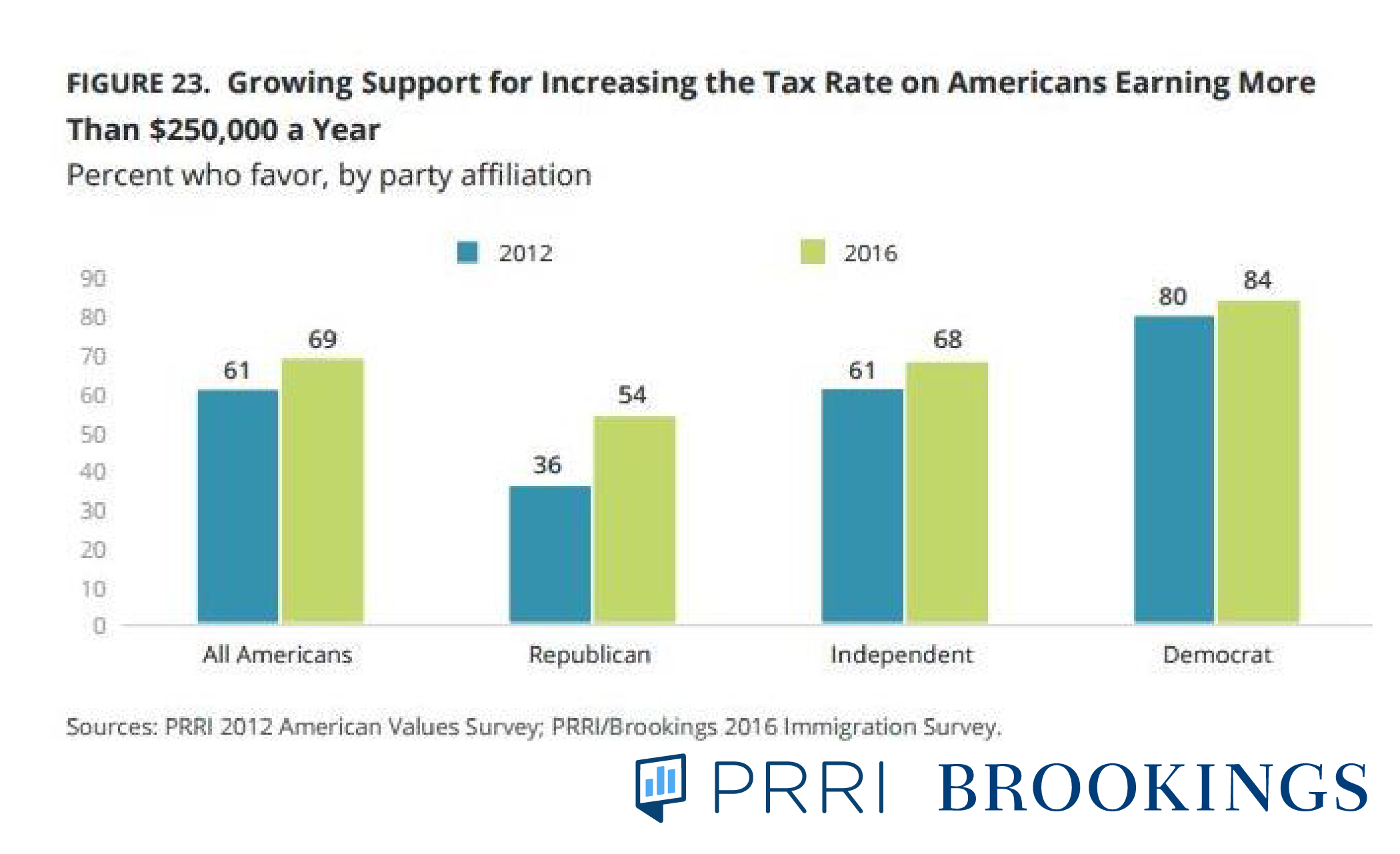 The share of  Republicans favoring increasing the tax rate on wealthy Americans jumped from 36 percent in 2012 to 54 percent in 2016—an 18 point increase. Democrats and Independents views on this position remained relatively constant, increasing from 80 to 84 percent and 61 to 68 percent approval respectively. 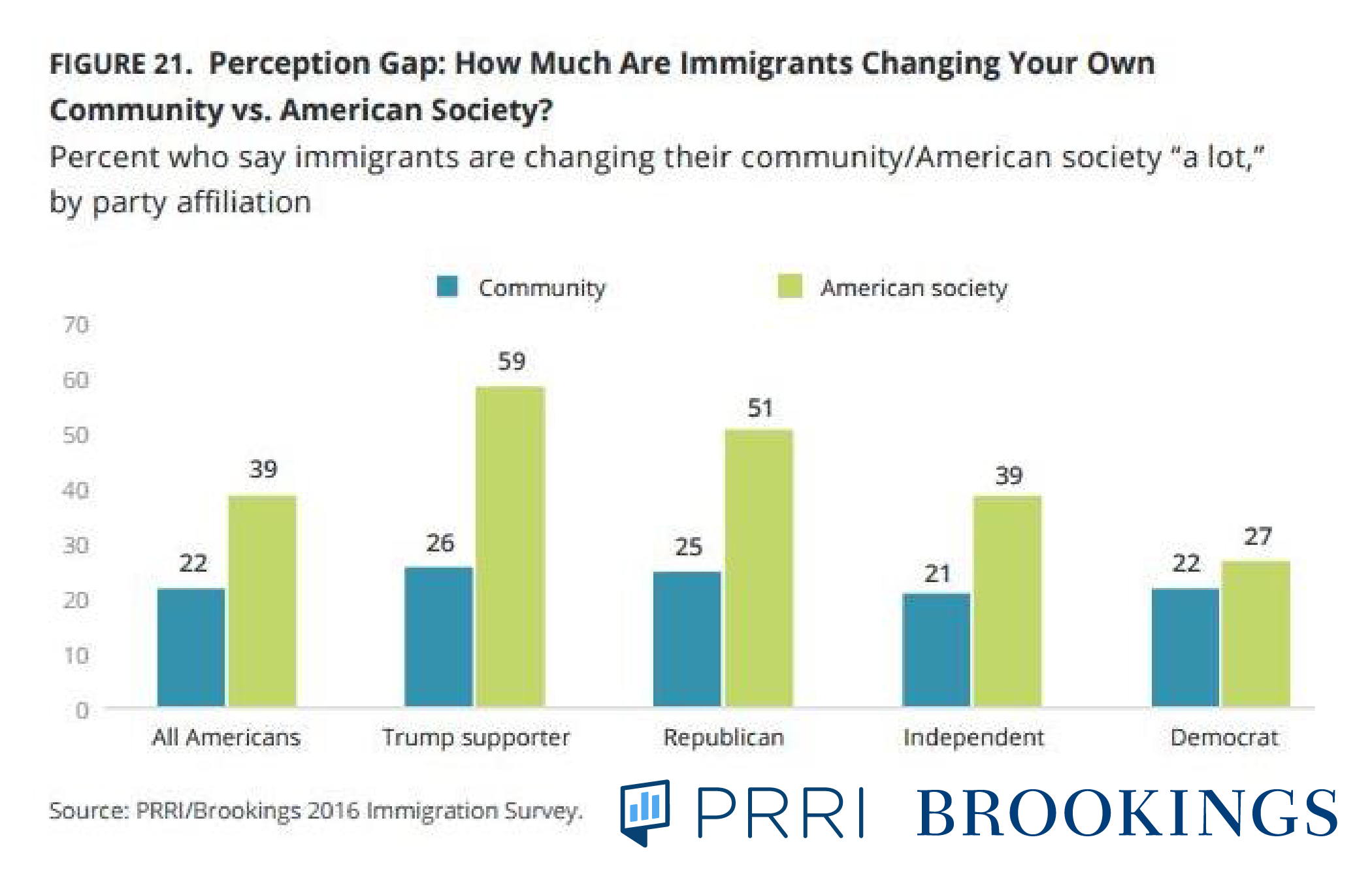 At the conclusion of Dr. Jones’s presentation, Brookings senior fellow in Governance Studies, Dr. William Galston moderated a panel discussion of the poll’s findings. Karlyn Bowman, a senior fellow and research coordinator at the American Enterprise Institute, observed that cultural anxiety has long characterized Americans’ views on immigration. Never, Bowman remarked, has the share of Americans that favor immigrants outpaced the share of those who oppose immigrants. Turning to the results of the PRRI survey, Bowman highlighted the partisan divide influencing responses to the proposition that the United States place a temporary ban on Muslims. The strong level of Republican support for the proposal–64 percent support among Republicans–compared to just 23 percent support among Democrats has more to do with fear of terrorism than anxiety about immigration, she argued.

Henry Olsen, a senior fellow at the Ethics and Public Policy Center, remarked that many Americans feel that government should do more to ensure protection, prosperity, and security — as evidenced by the large proportion of voters who feel that their way of life is under threat from terrorism (51%), crime (63%), or unemployment (65%).  In examining fractures within the Republican Party, Olsen considered the ways in which Trump voters differ from non-Trump voters, regardless of party affiliation. On questions of leadership, he suggested, the fact that 57% of all Republicans agree that we need a leader “willing to break some rules” is skewed by the high proportion of Trump supporters (72%) who agree with that statement. Indeed, just 49% of Republicans who did not vote for Trump agreed that the country needs a leader willing to break rules to set things right.

Joy Reid, National Correspondent at MSNBC, cited the survey’s findings that Americans are bitterly divided over whether American culture and way of life has changed for the better (49 percent) or the worse (50 percent) since the 1950s. More than two-thirds of Republicans (68 percent) and Donald Trump supporters (68 percent) believe the American way of life has changed for the worse since the 1950s. Connecting this nostalgia to survey results indicating anxiety about immigration and cultural change, Reid argued that culture—not economics—is the primary concern animating many Trump supporters.