Since Donald Trump burst onto the Republican political scene, the biggest of many surprises has been his staying-power. A recent Quinnipiac survey helps explain why: Trump has surged to a large lead nationally because he has been strong not only in the portions of the electorate observers expected him to dominate, but also among voters who seemed likely to reject him. Most other national surveys in recent days have pointed in the same direction, although the latest NBC/Wall Street Journal poll showed Sen. Ted Cruz rising by 8 points since January to 28% and Trump falling by 7 points to 26%. (In the absence of confirming evidence, this survey should be regarded as an outlier, at least for now.)

Among Republicans and Republican-leaning voters nationwide, Mr. Trump now enjoys a 2 to 1 lead over his nearest competitors, Cruz and Sen. Marco Rubio. He enjoys even larger margins among men, voters without college degrees, and among those who regard themselves as moderate to liberal or only “somewhat conservative.”

No surprises there, based on the New York billionaire’s sharply-etched profile. But consider these findings: Trump leads all other Republicans among women as well as men, college graduates as well as less-educated voters. He trails only Ted Cruz among very conservative voters, even though he rejects virtually all the tenets of the conservative movement. And amazingly, he leads Cruz among white evangelical and born-again Christians, despite a life-style and positions on social issues that contradict much of what these voters long have professed to regard as fundamental.

Trump enjoys a large advantage in public support, moreover, despite ranking at or near the bottom on most of the personal characteristics that voters value in prospective presidents—honesty and trustworthiness, caring about people’s needs and problems, sharing their values, and having the right experience. He leads in only one area—strong leadership qualities. It speaks volumes about the current mood among Republicans that the desire for strength appears strong enough to trump all other considerations, even among voters who prize piety and humility. 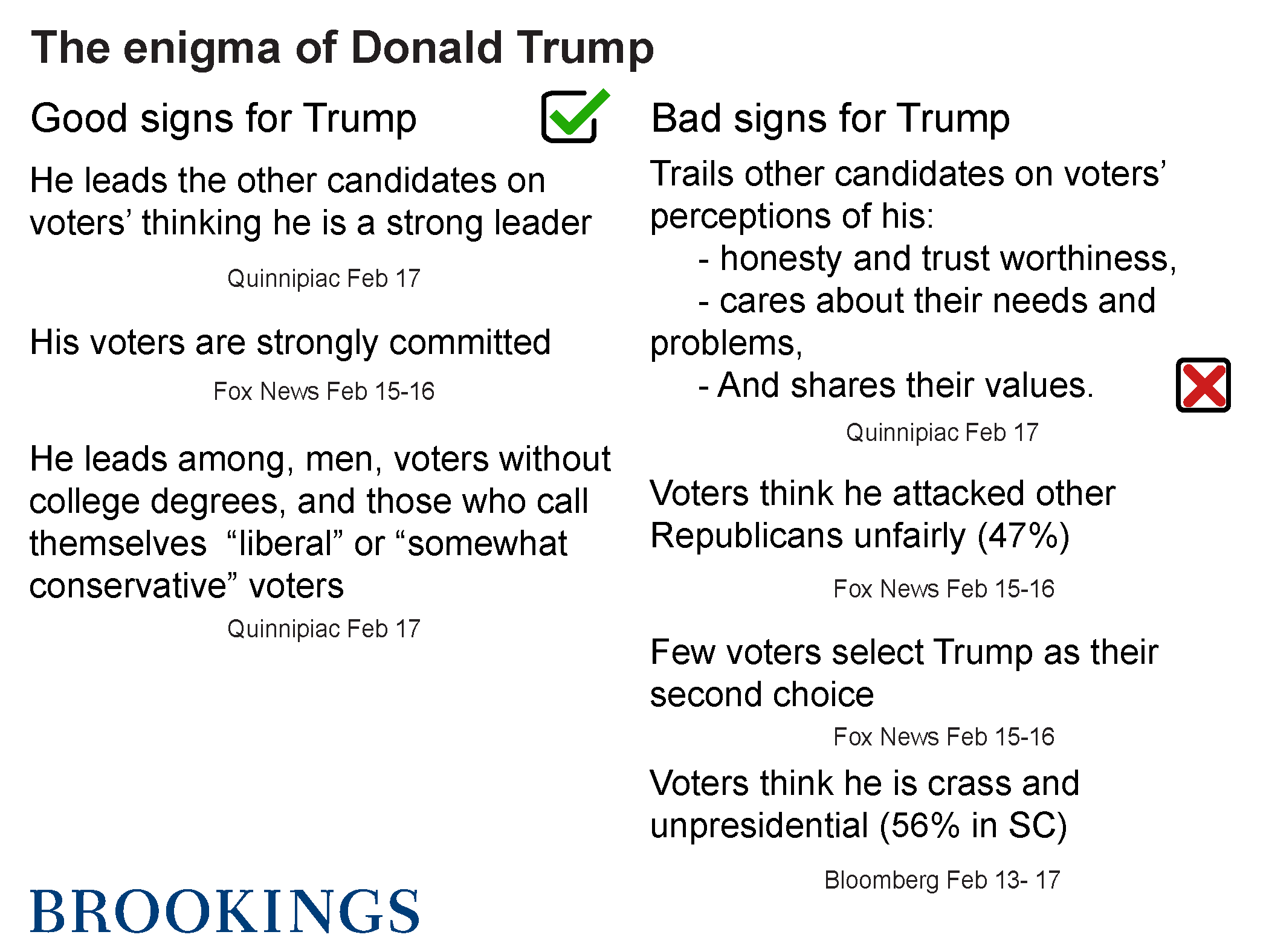 Other evidence suggests that Trump has a low ceiling as well as a high floor. On the one hand, his supporters are more committed than are those of any other candidate. In the most recent CBS News poll, on the other hand, 50% of likely Republican primary and caucus participants regarded his policy proposals as “not realistic,” compared to 33% for Cruz and 31% for Rubio. According to USA Today/Suffolk, only 31% of Republicans want a candidate with an ambitious agenda, while 55% want a limited agenda that the candidate credibly promises to get done. And few Republicans say that Trump is their second choice—fewer than for any other candidate. In short, the national numbers suggest that Trump will continue an enjoy an advantage as long as the field of his opponents remains large and divided but would encounter increasing difficulty as the field narrows and would probably lose a one-on-one contest to a number of challengers.

As veteran primary observers know, however, the presidential nominating process is played out over time, and what happens at each stage can reshape the national picture, sometimes abruptly. And the next stage—the South Carolina primary—has often proved pivotal in the Republican contest. As of now, Trump leads in every recent Palmetto State survey, averaging 35% to 17% for Cruz and Rubio and 10% for Ben Carson and Jeb Bush. 83% of his supporters say they are certain to support him in the upcoming primary, compared to 73% for Cruz and 71% for Rubio. On the other hand, 47% of South Carolina Republicans believe that Trump has attacked other Republican candidates unfairly; only 28% say that about Cruz, and even fewer—19% say it of Rubio [Fox News]. 56% agree that Trump’s language in large rallies had been “crass and unpresidential and reflected bad manner and bad taste [Bloomberg]. Against this backdrop, only 9% of South Carolina Republicans say that Trump is their second choice, compared to 17% for Rubio and 16% for Cruz, and the share saying that they would “never” support him has surged from 24% to 39% since December. [Fox] When it comes to Donald J. Trump, Republicans either love him or loathe him.

Turning to Trump’s closest pursuers, South Carolina surveys support what the national numbers suggest: Ted Cruz’s basic strategy is being challenged by facts on the ground. From the beginning, his plan has been to lock down the evangelical vote as well as the most conservative voters and then use them as the core of an eventual plurality. But Trump actually leads among evangelicals in South Carolina and is holding Cruz to a razor-thin edge among “very conservative” voters. [Monmouth, Fox 2/18] In the latest national numbers, similarly, Trump leads Cruz among evangelicals by 5 points, 30 to 25%. [Quinnipiac] Unless these segments of the party break toward the Texas senator, it is hard to see how he can win the nomination.

By contrast, Marco Rubio enjoys the greatest upside potential of any Republican candidate. 58% of likely South Carolina primary participants have a favorable view of the young Florida senator, compared to 47% for Cruz and 45% for Trump. Not surprisingly, Cruz would only tie Trump in a head-to-head contest, while Rubio would beat him, 49 to 43%. [PPP] And fully 24% regard Rubio as their second choice, compared to 16% for Cruz. When Cruz’s supporters are asked to choose between Rubio and Trump, 73% opt for Rubio. [Bloomberg]

Rubio’s age is the main factor holding him back: 35% of South Carolina Republicans worry that he is too young to be a good president [Bloomberg]. If he can allay that fear as the nominating contest continues, it is not hard to see how he could emerge with a plurality of the vote.

Much depends on how quickly the field narrows. If Bush finishes behind Rubio in South Carolina, in 4th or even 5th place, the pressure on him to leave the contest will intensify. If South Carolina Republicans conclude that their most preferred candidate doesn’t have a realistic chance of winning the nomination, only 32% think that he should fight on, compared to 60% who would want him to sacrifice his ambition and support another candidate who can help unify the party. It is not improbable that Republicans in later primary states view the situation similarly. Much will depend on the decision of Gov. Bush’s large donors, mainly of whom are linked to the Bush family by longstanding ties of loyalty. Much will depend, as well, on Bush’s willingness to give way to a man two decades his junior whose political career he helped launch.

In the end, a nominating contest becomes a delegate hunt. Complex rules translate raw votes into delegates, and these rules vary from state to state. In a forthcoming piece, Brookings Senior Fellow Elaine Kamarck will explain these hard-to-understand–even baffling—features of this fascinating race.