Jeb Bush managed to convince reputable journalists that his tax plan was populist. Will the same rhetoric work in the debates? Probably.

When Jeb Bush released his tax plan last week, it was hailed by many mainstream media outlets as a populist alternative to the standard Republican fare. More policy-oriented news sources quickly corrected the picture—actually, the plan is a huge tax cut for the very richest Americans. The journalistic about-face led to some awkward juxtapositions, as these competing New York Times headlines reveal (h/t climatebrad): 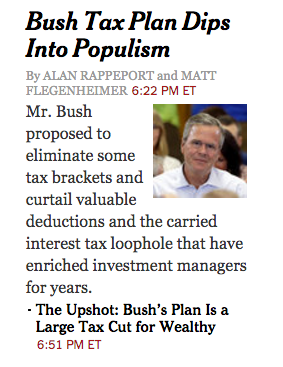 It’s worth examining how Jeb Bush’s team managed to convince reputable journalists that his plan was a boon for working America. Most obviously, he sent journalists some genuinely terrible charts. Exhibit A, an analysis of how much people at different income levels would benefit from his plan: 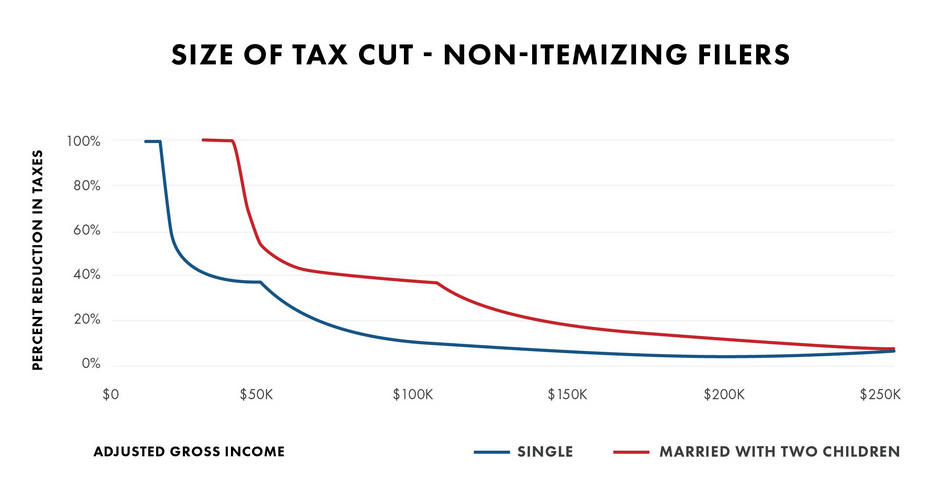 On first glance, it looks like all the tax breaks are going to folks at the bottom of the income scale. Populist indeed! But wait—this chart only shows the effect of his tax plan for people who do not itemize their taxes. Almost every wealthy household does itemize their taxes, so this chart tells us next to nothing. In fact, more than half of Jeb Bush’s tax cuts would go to the top 1% of earners—and that analysis does not even take account of the corporate tax breaks in the Bush plan.

Exhibit B, data on the corporate tax rate in the United States: 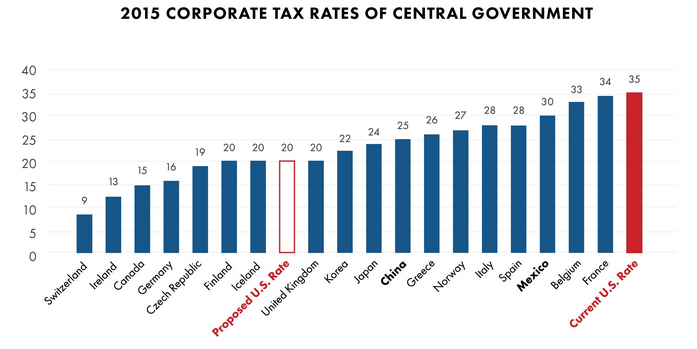 Looking at the chart, one gets the strong impression that corporations in the United States pay much higher tax rates than corporations in other countries. But the Bush campaign is reporting the statutory tax rate, not the effective rate—that is, the corporate tax rate on paper, not the tax rate corporations actually pay. The effective tax rate is only 13%, according to the Government Accountability Office, and “nearly 55 percent of all large U.S.-controlled corporations reported no federal tax liability in at least one year between 1998 and 2005.” You’d never guess that from reading the Bush tax plan.

But the problem is deeper than some sneaky data visualization. Journalists who miscalled the impact of the Bush plan tended to focus on a handful of loopholes Bush promises to close, rather than his much more expensive cuts to top tax rates.

My own research suggests that this myopia is widespread; in interviews with Americans across the country, I found that people are so focused on “loopholes” that they massively underestimate the impact of tax rates. This misunderstanding helps explain approval of the flat tax; as economist Joel Slemrod has shown, many supporters of a flat tax wrongly believe the policy would raise taxes on the rich.

But tax rates matter. The United States actually has one of the most progressive tax systems in the world because we rely on a graduated income tax. Cut the rates and you shift the tax responsibility onto poorer people and leave less money to invest in infrastructure, education, health care and other public goods.

Everyone hates the idea of loopholes, and at the debate tonight, Jeb Bush will undoubtedly be applauded if he talks about his plans to close them. It’s a distraction that is likely to work. After all, it already fooled a lot of political professionals.

Democracy on the ballot—How many election deniers are on the ballot in November and what is their likelihood of success?

The socioeconomic consequences of COVID-19 for Latino families