By now, everyone knows that our political parties are deeply polarized—and the American people only somewhat less so. Does that mean that we can’t even agree on the problems we need to address?

To some extent, according to a recent Pew Research Center study, the answer is yes. There are issues that Democrats care deeply about—global warming and the needs of the poor, for example—that are far down the list of Republican priorities. Similarly, Republicans care about strengthening the military and dealing with moral breakdown a lot more than Democrats do.

But a closer analysis of the Pew data reveals that in addition to these partisan agendas, there is an American Agenda of “top priorities” supported by majorities of Republicans, Democrats, and Independents and by a super-majority (60% or more) of all Americans. Ranked in order of overall support, they are: 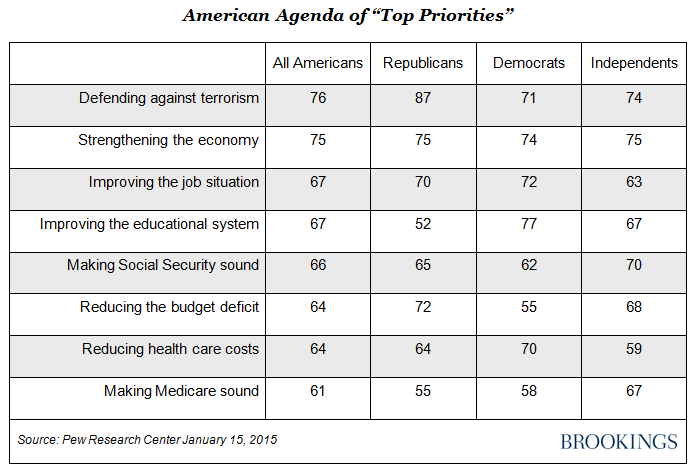 To agree on the problems is not necessarily to agree on solutions, of course. But the fact that despite their differences, the American people can endorse a shared agenda of top priorities should help focus the forthcoming presidential campaign. Good politics, after all, means offering real answers to the questions voters care about the most.

To a lesser extent, this American Agenda may also shape the efforts of the new 114th Congress. After decades of school reform, Americans are still worried about the condition of our educational system. Perhaps that will energize long-stalled efforts to reform the No Child Left Behind Act. Similarly, the looming exhaustion of the Social Security Disability Insurance fund could be the occasion for a broader conversation about securing the entire system for the long-term. The heightened concern about terrorism in the wake of the Paris attacks might be the entering wedge for replacing the 9/11 era authorization for the use of military force (AUMF) with a new resolution reflecting current problems and conditions.

The sooner elected officials begin addressing the problems that concern all Americans, the faster we will begin to reweave the tattered fabric of our politics. Trust in government would begin to rise from its historic lows. And who knows: together with the inevitable brickbats, maybe politicians would start getting some kudos as well.