June 24 will be another busy primary day—with races in Colorado, New York, Maryland, Oklahoma, and Utah—not to mention a closely watched runoff in Mississippi for the Republican Senate nomination. The headlines will, no doubt, feature the Mississippi race and a close Republican Senate primary in Oklahoma. But beyond the headlines those of us here at the Primaries Project will be asking a broader question. Did Congressman Eric Cantor’s surprising defeat at the hands of an unknown and underfunded Tea Party candidate turn the tide for the Tea Party?

Before Cantor’s surprise loss on June 10, many were writing the Tea party’s obituary. Until the June 10 primary, no incumbent member of Congress had lost his or her primary, with the sole exception of Ralph Hall who was forced into a runoff, in a race largely centering on age rather than ideology. Besides Cantor, the most visible Republican leader to be challenged by the Tea Party has been Senate Minority Leader Mitch McConnell (R-KY) and he won by a substantial margin. 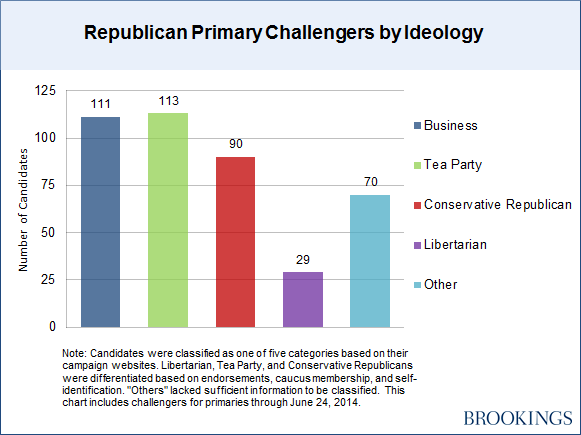 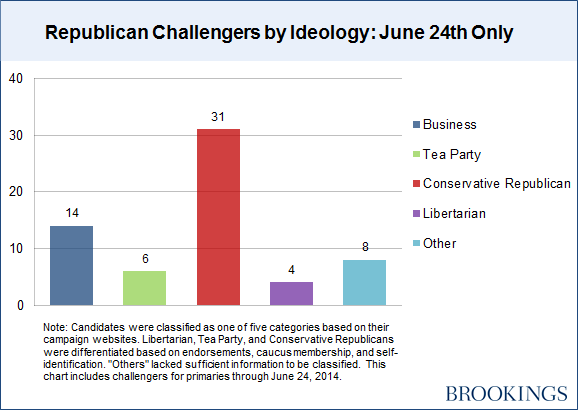 As is clear from the charts, there aren’t many Tea Party challengers in the June 24 primaries—thus, on the House side at least, they may not provide a clear-cut answer to whether or not the Tea Party’s fortunes have turned around.

If the revolt of the grassroots against the national Tea Party keeps up, the Primaries Project will have to start tracking that as well!