For education aid, we need to restore the spirit of the early 2000s if the SDGs are to get off to a good start.

A Hot-Cold Attitude toward Education

Looking more closely at the numbers over the past 10 years shows a marked shift in prioritization. In the first half of the decade, aid to education grew twice as fast as overall aid; while in the latter half of the decade, education aid grew much slower than overall aid. This “hot then cold” attitude towards education stands in stark contrast with support to health, which has consistently outperformed overall ODA growth throughout the decade.

Figure 1. Trends in Total and Sector Allocable Education and Health ODA over the Decade (2002-2013)

The declining support to education is puzzling at a time when global surveys consistently show that support for the sector is critical for successful development. In the UN’s My World Survey education was voted as the issue that mattered most by 4.7 out of 7 million voters. The World Bank Country Opinion Surveys also show that education is ranked top among sectors by governments seeking to borrow from the World Bank. Several major studies in recent years have also shown the importance of education for achieving non-education development goals.

The decline in basic education aid raises questions around where and how scarce aid dollars could be most effectively spent, even within the education sector. Recent evidence on rates of returns continue to highlight that social returns for pre-primary and primary education are greater than for higher levels of education. At the same time, higher levels of education have much stronger private returns. This suggests public spending (from governments or donors) should ideally be focused on improving access and quality of education at lower levels, with much more selected interventions focused on system strengthening, support for marginalized groups, or specific higher education fields with high social returns. We agree with others however that much better longitudinal evidence is needed to assess benefits of early education that only occur much later in life. The lack of such rigorous data is education’s Achilles heel.

At the Brookings Institution we are working on a number of reports to get a deeper understanding of the level and quality of spending on education by national governments, donors, and private actors. The optimal levels of different types of financing will need to be determined based on each country’s development goals and financing contexts (including domestic revenue capacity and access to alternative sources of finance). What is clear, however, is that national governments and in particular low-income countries are struggling to raise the necessary financing for education from their own revenues. 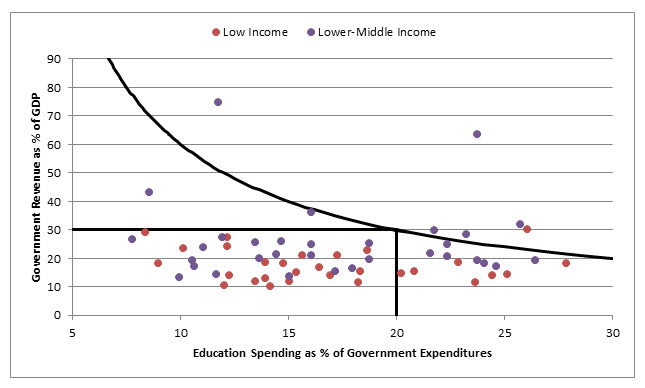 This suggests there is a clear need for aid and other sources of finance to fill gaps and for aid to play an important role in supporting basic education. Of all sector allocable overseas development assistance going toward education, the current share put toward basic education is only 24 percent. This clearly falls short of what is needed.

A Roadmap for Boosting Education ODA

We must seek to better understand why current donor investments in education—and in particular basic education—are falling short of needs and expectations. Along with Geraldine Baudienville in 2009, I have looked at this issue before. We identified possible drivers in that study, the three most important of which were:

Close to 60 million children of primary age remain out of school, and an estimated 250 million children are lacking basic reading and writing skills. This must be urgently addressed if the world still seeks to achieve the Sustainable Development Goals it will be setting in 2015. We need all hands on deck—including those of the international community.

How currency sanctions on Russia could disrupt trade with Africa