Promising free college has obvious political attraction for presidential candidates. From my perspective, free college is the right idea, but some of the promises go too far; in fact, exactly twice too far. There is a very strong argument for promising two years “free” at public colleges; the argument for a four-year free ride—not so much.

In a nutshell, my argument is that America has long supported free K-12 education and that two years of college is pretty much what K-12 used to be, with most Americans now obtaining at least some college education. For most people, getting some college is the key to the middle-class—creating a case for public support during the first two years after high school.

Douglas Harris has a great Chalkboard post that will bring you up to date on what candidates have said, and will give you many of the pros and cons for various higher education proposals. Harris also talks about popular support for different proposals in another Chalkboard post. Here, I’m going to stick to the narrower question of why paying for two years of public college is the right goal.

In the picture that follows I present educational attainment numbers for the American population from 1950 through the most current data. I’ve divided the population into those with a high school education or less, colored in red, those with some college but less than four years, blue, and those with four or more years of college, colored in green. (The category “some college” includes vocational training such as certificate programs at community colleges as well as more purely academic courses.

The vertical axis shows the fraction of the population with a given educational attainment—categories are stacked at each point in time to sum to 100%.

You can see that in the early post-war years, most Americans had no more than a high school education. Today the majority has picked up at least some college. I’ve also drawn in a line at the 50% point on the theory that the middle is “middle class.” Up until about 1990, the median American had a high school education or less. That’s fallen to about a third, and the median American now has some college. So “some college” has replaced high school or less as the standard educational attainment. If it made sense in the past to provide free public education through high school, then doing the equivalent today means paying for some level of college. Note that the green (4+ years of college) area is still way, way above the 50% line. Only about 30% of the population currently attains that much education. So such an appeal to the past does not provide an argument for four years of free college. 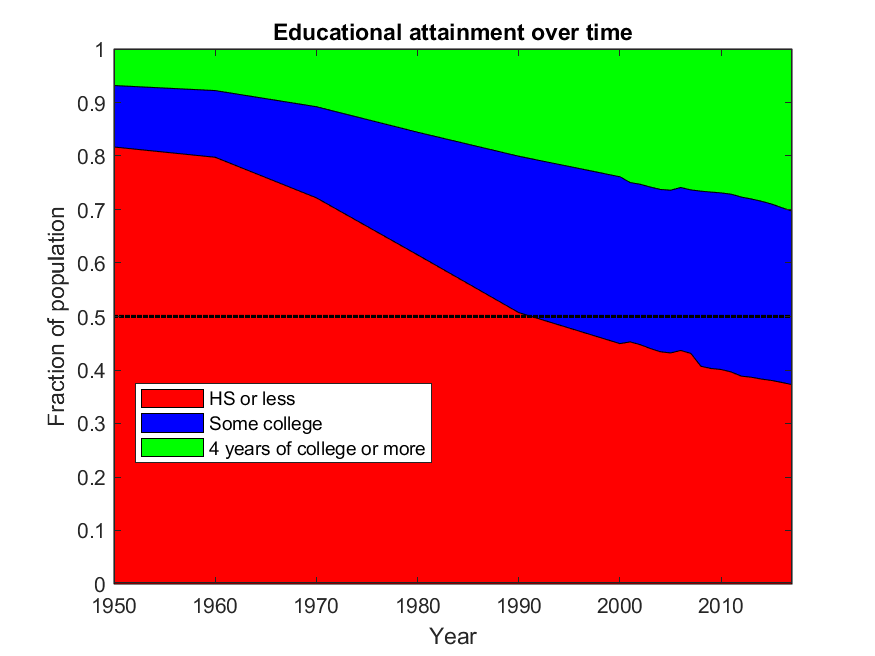 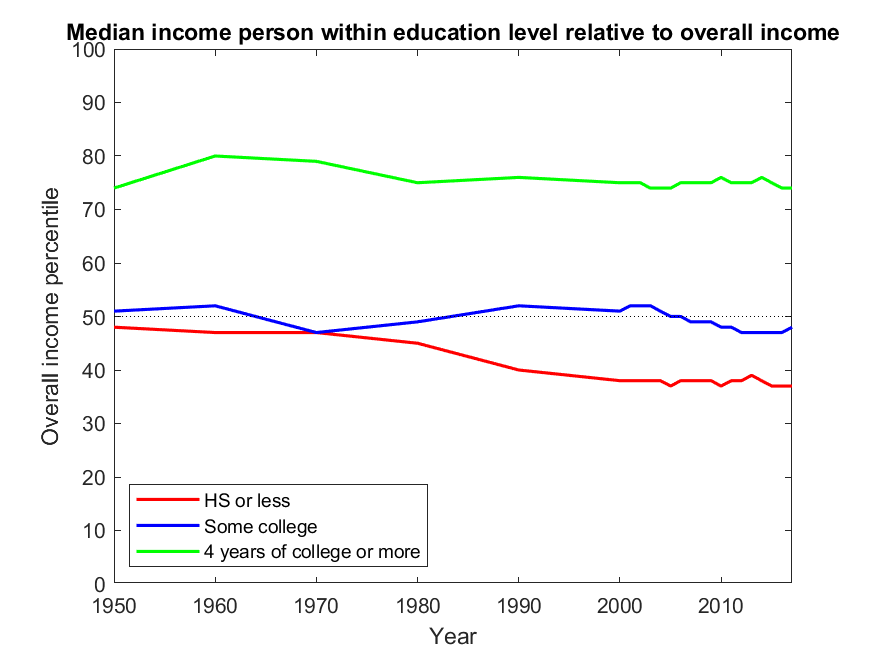 Some presidential candidates propose free community college, others advocate that all public college should be free. One reaction to the latter position is that we shouldn’t be subsidizing college graduates as they typically end up with higher incomes than the rest of the population. Look at the green line in the figure above. Not only does the average person with four or more years of college have a higher income than most people—they have a much higher income. You can argue that the 70th percentile of income is still middle class. (In the United States, it seems that everyone below the top 0.1% thinks of themselves as being in the middle class.) But the fact is that the income in the top educational attainment group is a lot higher.

The argument that “some college” is the new “high school” and should be similarly free makes sense to me, but this logic doesn’t extend to a free ride for four years.