Donald Trump has made waves during this year’s election cycle by taking a hard line on illegal immigration. This, however, builds on years of heated debate among policymakers. It is also an enduring hot-button issue in Arizona, which has passed several immigration laws over the years.  In 2010, the passage of SB 1070 brought national attention to this debate.  Deemed the strictest immigration law to date, SB 1070 sought to achieve “attrition [of illegal immigrants] through enforcement” by requiring law enforcement to detain any person whom they believed to be residing in the country illegally. Although SB 1070’s effects on individuals and families have been well documented, little is known about its impact on students and schools. To this end, we sought to estimate the relationship between the passage of SB 1070 and school-level student achievement.

We anticipated that anti-immigration policies would primarily affect children from the families of undocumented immigrants. Such effects could be observed in different ways. For instance, the emotional and psychological distress of these children could result in a decline in average test scores at the school-level. On the other hand, students might have left the country or the state under the threat of being deported in which case school-level test scores would rise (since these students often perform below their peers). To this end, we considered three scenarios:

In order to see which of these hypothetical scenarios is supported by the data, we first estimated the relationship between the passage of SB 1070 and average school-level reading test scores. We then attempted to unpack the mechanism through which such an effect might have taken place. To this end, we used publicly available data on school-level achievement and enrollment collected by the Arizona Department of Education (ADE). Given the targeted nature of the policy and the demographics of immigrants in Arizona, the majority of whom are of Hispanic or Mexican descent, we focused on schools that traditionally enroll large proportions of Hispanic students. We identified schools with high (more than 75 percent) shares of Hispanic students as those whose average achievement and student composition are most likely to be affected by immigration reform. We contrasted changes in school-level achievement and enrollment in those schools with schools that enroll less than 25 percent Hispanic students, as these schools are less likely to experience any changes as a result of tightening immigration laws.

Figures 1 and 2 show trends in the average percentage of students passing the state reading test and average Hispanic enrollment at these schools between 2006-2007 and 2011-2012. 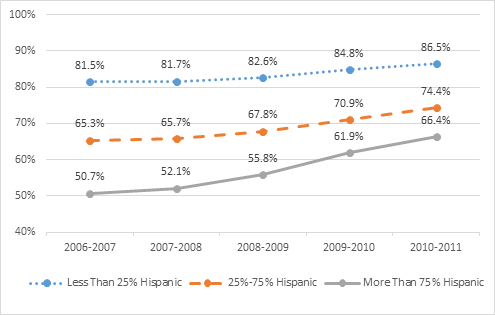 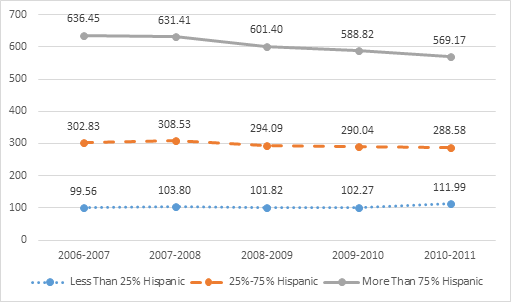 Clearly, the rate of growth in school-level reading scores was much higher for high Hispanic schools after the passage of SB 1070 in 2010 (Figure 1). At the same time, there was a significant decrease in Hispanic enrollment in these schools (Figure 2). Thus, it appears the second scenario is likely driving the patterns we observe.

The data also suggest that the trends for high Hispanic and low Hispanic schools started diverging before the passage of SB 1070 – after the 2007-2008 school year.  This happens to be the year that Arizona passed an even more restrictive, though less controversial, immigration law – the Legal Arizona Workers Act (LAWA). LAWA required Arizona business owners to verify the legal status of their employees using E-Verify, an online tool managed by the federal government. Although LAWA used a different mechanism, similar to SB 1070 it sought to achieve the attrition of undocumented immigrants from the state.

Despite the fact that we cannot pin down the exact magnitude of SB 1070’s effect on school-level achievement, our analysis shows that when Arizona passed restrictive immigration laws in 2008 and 2010, it looked as if the state’s lowest performing schools were improving rapidly. This, however, likely had more to do with the changing composition of schools as an indirect though anticipated effect of immigration policies than with policies aimed at improving student achievement.

Despite this, the Arizona Department of Education took credit for these gains. Similarly, Arizona was recently recognized as one of the nation’s leaders in growth on the National Assessment of Educational Progress (NAEP) over the last ten years. Although wrongly attributing these gains may seem harmless at first glance, it is important to remember that Arizona is viewed by many as a model for controversial education reforms like school choice and high-stakes accountability. It is easy to imagine how policymakers might look at increasing test scores in Arizona and wrongly attribute them to these kinds of reforms. That’s not to say that these policies don’t have merit. However, if other states adopt education policy reforms under the assumption that they worked in Arizona, then they might find that these policies fail to deliver.