If you’re like me, artificial intelligence has always been more closely associated with science fiction than science fact. Yes, I watched IBM’s supercomputer Watson beat “Jeopardy!” champions Ken Jennings and Brad Rutter at their own game back in 2011; but as an isolated event, it was easy to dismiss as the digital equivalent of a neat parlor trick.

Or so I thought. It turns out the speed of processors continues to march on at exponential rates and now, just five years later, Watson’s impressive feats back then are just parlor tricks compared to what current computers and robots can do.

Ready or not, robots are coming to our homes and offices. The advance of artificial intelligence and automation is hitting a point where thoughtful scholars are starting to take serious note. This advance in technology presents policy dilemmas in many areas that may require some creative solutions in the future. In education policy, Daniel Araya has argued that we should refocus our instruction in schools to help students flourish in the face of these technological advances. For today, however, I want to focus on where we’re likely to see robots and microprocessors in schools taking over the tasks humans are currently performing.

To set the stage, keep in mind that education is a labor-intensive industry. The most recent financial numbers from the National Center for Education Statistics indicate 55 cents out of every dollar spent on K-12 public schools in the U.S. goes towards salaries and benefits. Factoring in the so-called purchased services category, which also tend to be labor-intensive services like providing teacher professional development or driving and maintaining school buses, that figure exceeds 60 cents on the dollar. And labor-intensive industries generally imply large potential for gains from a technology-labor substitution. So are schools the next fertile ground for robots to flourish and humans to flounder?

First the good news, as far as job security is concerned: Most core education jobs are fairly well insulated from replacement by technology. According to a recent McKinsey report about the automation potential of approximately 2,000 work activities in the U.S., occupations in the education sector tend to have many job tasks that are not amenable to automation.

I extracted some of the data points from the McKinsey report related specifically to jobs in education and present them in the figure below. The x-axis represents the share of each occupation’s task that is judged to be automatable; the y-axis represents current U.S. employment figures. Most education jobs are on the left-hand side of the scatterplot, representing low levels of automation potential – almost all occupations are less than 20 percent automatable. The two education occupations with more significant automation potential are both library jobs, which currently employ relatively few workers. 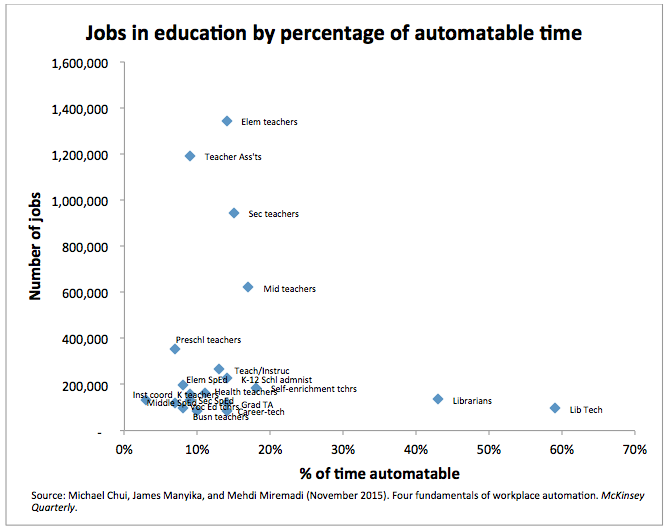 The bad news is that these are not the only jobs that occur in schools. There are many other jobs that function to complement public schools, but are services provided broadly across many industries and aren’t included in this figure. In general, these jobs are very vulnerable to automation pressures. These are jobs like bus drivers (67 percent automatable), food preparers (87 percent), security guards (84 percent), janitors (66 percent), receptionists (95 percent) and accounting and reporting clerks (98 percent). (These figures are based on automation estimates from Frey and Osborne.) These numbers suggest tomorrow’s schools will hire far fewer supporting staff to complement the school’s mission to educate the nation’s young people.

Finally, we should not assume that because most education jobs are insulated from automation pressures that these jobs will continue to look the same indefinitely into the future. It’s reasonable to expect that some educators’ tasks will become automated over time. Paperwork tasks like attendance and grade reporting are low-hanging fruit here. Lesson-planning as well as logistical tasks like scheduling and classroom assignments could become more effortless for staff. I’m sure many teachers would happily outsource homework grading and assessment to the droids. Blended learning will likely continue to make advances across classrooms as a substitution of teachers’ time, though I see it unlikely to dominate instruction, particularly in elementary grades.

Though it seems highly unlikely that automating any of these tasks above will reduce the need for teachers, the combined effect of these changes implies what teachers do will likely change somewhat dramatically over time. And with teachers spending less time on these routine tasks, it may be the case that not as many teachers are needed to teach the same number of kids. Or alternatively, technological advances could create new jobs or specializations that allow students to learn even more.

Advances in computing and artificial intelligence will almost certainly change how schools are staffed in the future, even if most education jobs are relatively safe. Up until the recession-induced layoffs of teachers starting in 2009, the number of students per adult in U.S. schools was at an all-time low. With automation and budgetary pressures unlikely to subside any time soon, I speculate that schools will likely never see those ratios that low again.

TechTank Podcast Episode 44: Can policymakers level the playing field in the computer sciences?

Gavin Wilde and Justin Sherman
Wednesday, May 11, 2022
Get daily updates from Brookings