As we approach the annual celebration of Dr. King’s life, it is worth examining the difference in how our schools discipline black and white children. In public schools in the United States, black children are twice as likely as white children to be subject to corporal punishment. Figure 1 shows the comparison, derived from nationwide data reported by schools to the Office of Civil Rights, Department of Education.[1] (All data is for the 2011-2012 school year, the latest year available.) The continuing disproportionate corporal punishment of black children is a reminder that some aspects of the “bad old days” are not fully behind us. 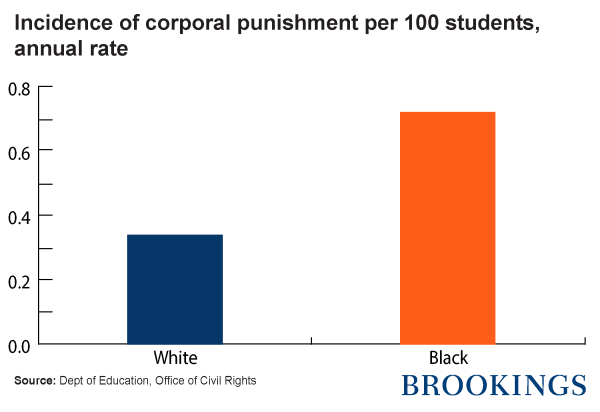 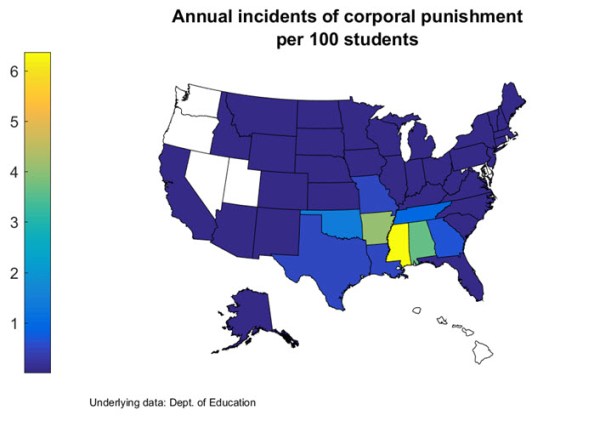 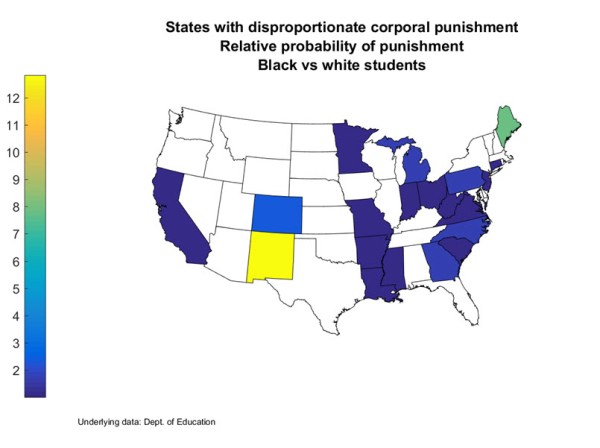 While heavy use of corporal punishment is more common in states of the former Confederacy, racially disproportionate application happens in northern states as well. Schools in Pennsylvania and Michigan are nearly twice as likely to beat black children as white, although both have low overall rates of corporal punishment. 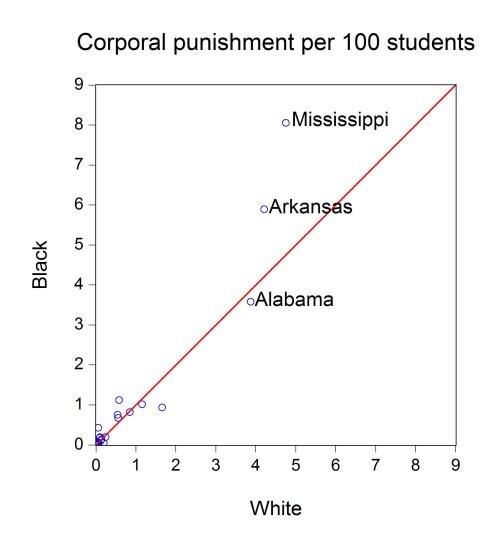 While the symbolism of continued physical violence against black children is inescapable, the disproportionate application of other forms of discipline may be of even greater concern. Except in Mississippi and Arkansas, the typical black student will probably not be subjected to corporal punishment during his school career. In contrast, school suspensions are much more common. Figure 5 shows rates of suspension by race. 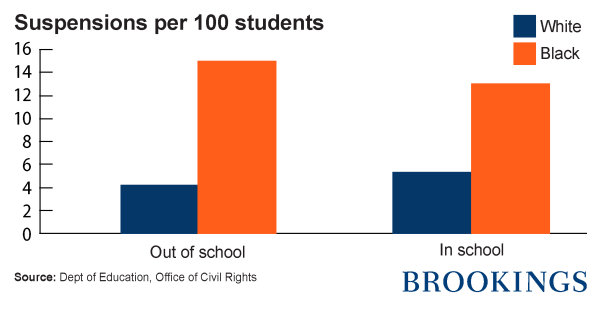 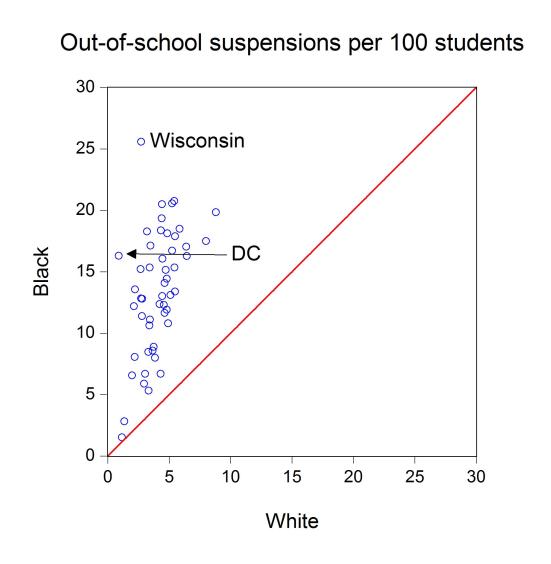 Out-of-school suspensions are applied disproportionately in every state—all points are above the red line. And these discipline patterns do not line up with old geographic patterns. The highest suspension rates for black students are in Wisconsin. And the greatest disparities (measured as the ratio of black-to-white suspension rates) are in the District of Columbia.

Every time a child is beaten in school and every time one is suspended and thus loses learning time, something or someone has failed that child along the way, regardless of the “reason” for the punishment. So long as these failures fall disproportionately on black children, we are not yet living up to the dream that “children will one day live in a nation where they will not be judged by the color of their skin but by the content of their character.”

Discipline per 100 students is 100 times the ratio of discipline of a particular type reported for all students of a given race to the corresponding overall enrollment figures given by the Office of Civil Rights, for 2011-2012.

[1] The Office of Civil Rights collected data from all U.S. public schools. The data used here is aggregated to the state and national level by the Office of Civil Rights and can be found at http://ocrdata.ed.gov/StateNationalEstimations/Estimations_2011_12. Data is reported either directly by school districts or by states’ education agencies on behalf of the districts. Data on corporal punishment may count multiple incidents for a single student as multiple occurrences. According to the Office of Civil Rights, “Corporal punishment is paddling, spanking, or other forms of physical punishment imposed on a student.” Data for suspensions reports counts of students with multiple out-of-school suspensions as a single incident. Because all data is self-reported, it is not known whether all districts use the same standards in reporting.