The release of 2015 NAEP scores showed national achievement stalling out or falling in reading and mathematics.  The poor results triggered speculation about the effect of Common Core State Standards (CCSS), the controversial set of standards adopted by more than 40 states since 2010.  Critics of Common Core tended to blame the standards for the disappointing scores.  Its defenders said it was too early to assess CCSS’s impact and that implementation would take many years to unfold. William J. Bushaw, executive director of the National assessment Governing Board, cited “curricular uncertainty” as the culprit.  Secretary of Education Arne Duncan argued that new standards typically experience an “implementation dip” in the early days of teachers actually trying to implement them in classrooms.

In the rush to argue whether CCSS has positively or negatively affected American education, these speculations are vague as to how the standards boosted or depressed learning.  They don’t provide a description of the mechanisms, the connective tissue, linking standards to learning.  Bushaw and Duncan come the closest, arguing that the newness of CCSS has created curriculum confusion, but the explanation falls flat for a couple of reasons.  Curriculum in the three states that adopted the standards, rescinded them, then adopted something else should be extremely confused.  But the 2013-2015 NAEP changes for Indiana, Oklahoma, and South Carolina were a little bit better than the national figures, not worse.[i]  In addition, surveys of math teachers conducted in the first year or two after the standards were adopted found that:  a) most teachers liked them, and b) most teachers said they were already teaching in a manner consistent with CCSS.[ii]  They didn’t mention uncertainty.  Recent polls, however, show those positive sentiments eroding. Mr. Bushaw might be mistaking disenchantment for uncertainty.[iii]

For teachers, the novelty of CCSS should be dissipating.  Common Core’s advocates placed great faith in professional development to implement the standards.  Well, there’s been a lot of it.  Over the past few years, millions of teacher-hours have been devoted to CCSS training.  Whether all that activity had a lasting impact is questionable.  Randomized control trials have been conducted of two large-scale professional development programs.  Interestingly, although they pre-date CCSS, both programs attempted to promote the kind of “instructional shifts” championed by CCSS advocates. The studies found that if teacher behaviors change from such training—and that’s not a certainty—the changes fade after a year or two.  Indeed, that’s a pattern evident in many studies of educational change: a pop at the beginning, followed by fade out.

My own work analyzing NAEP scores in 2011 and 2013 led me to conclude that the early implementation of CCSS was producing small, positive changes in NAEP.[iv]  I warned that those gains “may be as good as it gets” for CCSS.[v]  Advocates of the standards hope that CCSS will eventually produce long term positive effects as educators learn how to use them.  That’s a reasonable hypothesis.  But it should now be apparent that a counter-hypothesis has equal standing: any positive effect of adopting Common Core may have already occurred.  To be precise, the proposition is this: any effects from adopting new standards and attempting to change curriculum and instruction to conform to those standards occur early and are small in magnitude.   Policymakers still have a couple of arrows left in the implementation quiver, accountability being the most powerful.  Accountability systems have essentially been put on hold as NCLB sputtered to an end and new CCSS tests appeared on the scene.  So the CCSS story isn’t over.  Both hypotheses remain plausible.

Back to the mechanisms, the connective tissue binding standards to classrooms.  The 2015 Brown Center Report introduced one possible classroom effect that is showing up in NAEP data: the relative emphasis teachers place on fiction and nonfiction in reading instruction.  The ink was still drying on new Common Core textbooks when a heated debate broke out about CCSS’s recommendation that informational reading should receive greater attention in classrooms.[vi]

Fiction has long dominated reading instruction.  That dominance appears to be waning. 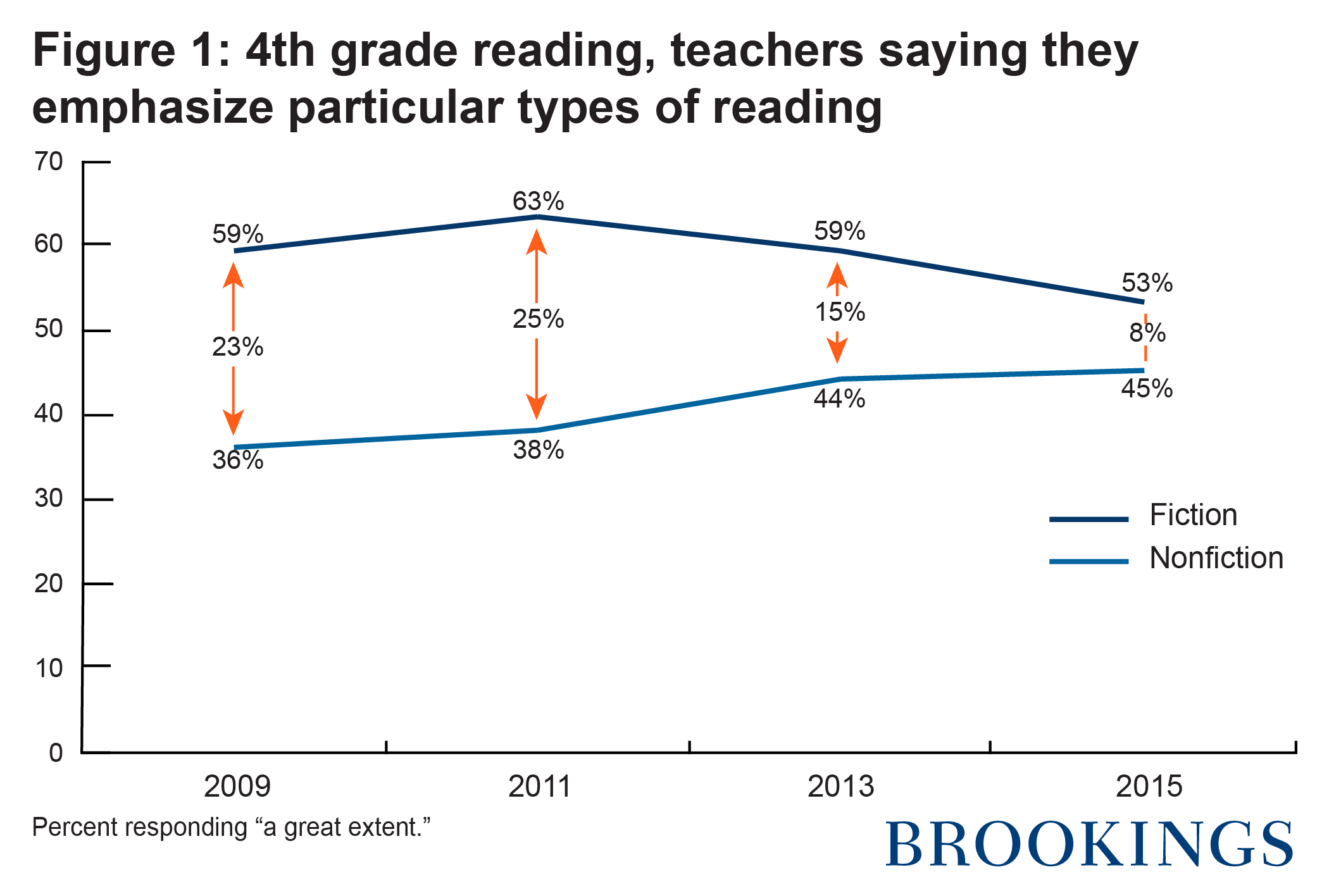 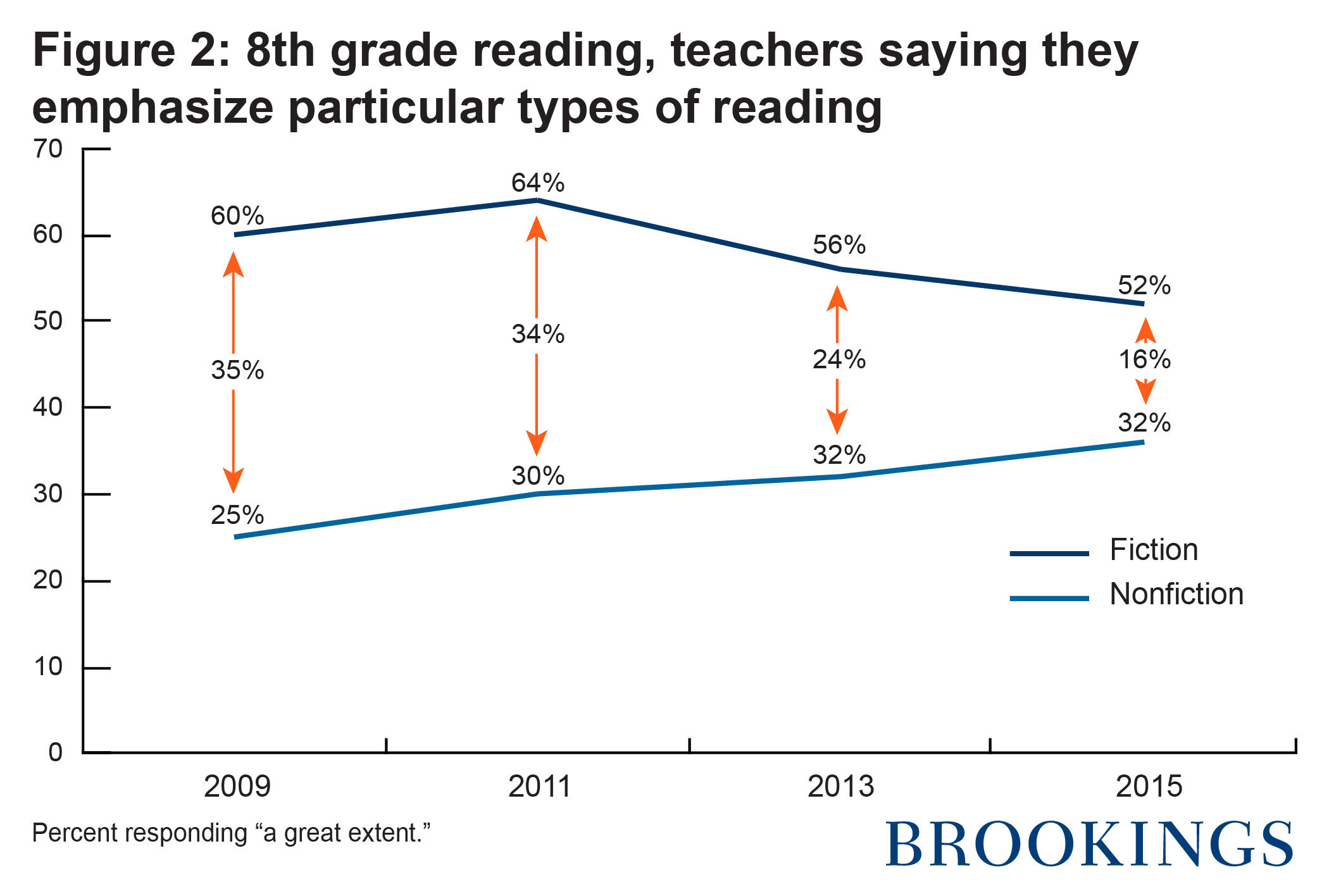 After 2011, something seems to have happened.  I am more persuaded that Common Core influenced the recent shift towards nonfiction than I am that Common Core has significantly affected student achievement—for either good or ill.   But causality is difficult to confirm or to reject with NAEP data, and trustworthy efforts to do so require a more sophisticated analysis than presented here.

Nevertheless, the figures above reinforce important lessons that have been learned from previous top-down reforms.  Let’s conclude with four:

1.  There seems to be evidence that CCSS is having an impact on the content of reading instruction, moving from the dominance of fiction over nonfiction to near parity in emphasis.  Unfortunately, as Mark Bauerlein and Sandra Stotsky have pointed out, there is scant evidence that such a shift improves children’s reading.[vii]

2.  Reading more nonfiction does not necessarily mean that students will be reading higher quality texts, even if the materials are aligned with CCSS.   The Core Knowledge Foundation and the Partnership for 21st Century Learning, both supporters of Common Core, have very different ideas on the texts schools should use with the CCSS.[viii] The two organizations advocate for curricula having almost nothing in common.

3.  When it comes to the study of implementing education reforms, analysts tend to focus on the formal channels of implementation and the standard tools of public administration—for example, intergovernmental hand-offs (federal to state to district to school), alignment of curriculum, assessment and other components of the reform, professional development, getting incentives right, and accountability mechanisms.  Analysts often ignore informal channels, and some of those avenues funnel directly into schools and classrooms.[ix]  Politics and the media are often overlooked.  Principals and teachers are aware of the politics swirling around K-12 school reform.  Many educators undoubtedly formed their own opinions on CCSS and the fiction vs. nonfiction debate before the standard managerial efforts touched them.

4.  Local educators whose jobs are related to curriculum almost certainly have ideas about what constitutes good curriculum.  It’s part of the profession.  Major top-down reforms such as CCSS provide local proponents with political cover to pursue curricular and instructional changes that may be politically unpopular in the local jurisdiction.  Anyone who believes nonfiction should have a more prominent role in the K-12 curriculum was handed a lever for promoting his or her beliefs by CCSS. I’ve previously called these the “dog whistles” of top-down curriculum reform, subtle signals that give local advocates license to promote unpopular positions on controversial issues.

[i] In the four subject-grade combinations assessed by NAEP (reading and math at 4th and 8th grades), IN, SC, and OK all exceeded national gains on at least three out of four tests from 2013-2015.  NAEP data can be analyzed using the NAEP Data Explorer: http://nces.ed.gov/nationsreportcard/naepdata/.

[ii] In a Michigan State survey of teachers conducted in 2011, 77 percent of teachers, after being presented with selected CCSS standards for their grade, thought they were the same as their state’s former standards.  http://education.msu.edu/epc/publications/documents/WP33ImplementingtheCommonCoreStandardsforMathematicsWhatWeknowaboutTeacherofMathematicsin41S.pdf

[viii] Compare the P21 Common Core Toolkit (http://www.p21.org/our-work/resources/for-educators/1005-p21-common-core-toolkit) with Core Knowledge ELA Sequence (http://www.coreknowledge.org/ccss).  It is hard to believe that they are talking about the same standards in references to CCSS.

[ix] I elaborate on this point in Chapter 8, “The Fate of Reform,” in The Tracking Wars: State Reform Meets School Policy (Brookings Institution Press, 1999).