Brown Center Fellow Beth Akers recently participated in a lively debate over the controversial motion, “student loans are a crisis for students and the economy,” at the National Association of Student Financial Aid Administrators (NASFAA) annual conference. Akers was joined by Andrew Kelly, director of the Center on Higher Education Reform at the American Enterprise Institute (AEI), in arguing against the motion, while Kevin Fudge, manager of Government Relations and Community Affairs at American Student Assistance, and Mark Huelsman, senior policy analyst at Demos, argued in favor. In the words of moderator John Donovan, the faceoff was “a battle of persuasion,” with the objective being to sway as many audience votes as possible.

In the course of one hour, both sides were given opportunities to make arguments, to react to one another, and to respond to audience questions, and in that time all four participants made many compelling points.

Huelsman argued succinctly that “The most important reason we face a crisis in the system is that a degree is far from guaranteed.” He went on to explain that four in ten low-income borrowers and four in ten black borrowers drop out of school, with the vast majority citing student loan debt as the number one reason for dropping out. Most concerning of all is the fact that drop-outs are four times more likely to default on their loans.

Huelsman’s teammate Kevin Fudge pointed to the impact of student loan debt on other lifetime outcomes as evidence of a crisis, stating that borrowers he worked with “consistently expressed concern about how their loans affected their ability to pay for housing and basic goods and services, let alone save for retirement.” This was one area of discussion that received a direct challenge from an opponent, with Andrew Kelly claiming that many arguments about the effect of student debt on home ownership mistake correlation for causation.

In responding to her opponents, Akers argued repeatedly that the conclusion that there is a student debt crisis is the result of consistently making mistakes in logic, such as comparing a stock of lifetime debt to a flow of annual income. For more on this common error, see Akers and Chingos’s 2014 report on the topic.

For his part, Andrew Kelly focused largely on the consequences of referring to a student debt crisis, arguing that, “If we define this as a debt problem it leads us to a place where our object is to lower debt loads, which leads to all sorts of bad policy like proposals to refinance loans that deliver large subsidies to people who are having no trouble paying loans back.”

Akers touched on another potential consequence of the “crisis” rhetoric in saying, “It’s critically important that low-income students continue to have access to the benefits afforded by higher education. It makes me very scared to think that we’re going to continue to talk about debt in this way and potentially reduce the opportunities that low-income students have.”

While the exchange between sides was at times heated, several areas of consensus emerged throughout the conversation as well. All four participants agreed that undeniably, some student loan borrowers are struggling tremendously. While Huelsman and Fudge pointed to this fact as evidence of a crisis—a crisis that exists among a certain, vulnerable group of borrowers—that demands addressing, Akers and Kelly argued that these individual crises should not be confused for a macro crisis. Both sides also concurred that a crisis of information exists in the higher education and student loan markets. This is a problem that Akers has specifically investigated in prior research and argues is in dire need of fixing.

Despite some degree of consensus, these two sides were ultimately arguing against one another. So, who won? Based on the number of votes that were swayed between an initial vote before the debate and a final vote after the closing statements, the Akers/Kelly team was declared victorious. Not only did they convince 16 percent of the audience to change its vote, they also swayed the majority, with 57 percent of the audience ultimately agreeing that “student loans are not a crisis for students and the economy.” 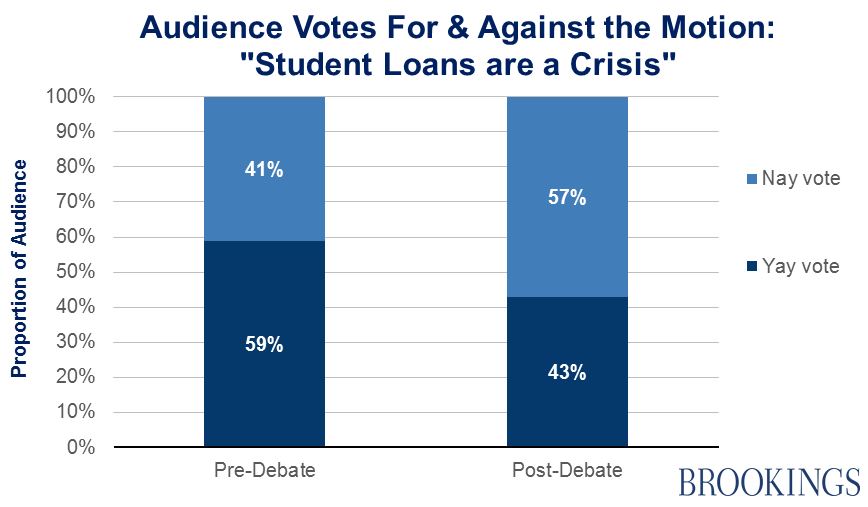 How would you have voted? Watch the debate here to decide.