In this week’s charts of the week, we discuss minority participation in government from the share of women and Black candidates and elected officials nationwide to participation of marginalized voices in public commenting periods.

The representation of women in Congress is increasing, concentrated within the Democratic Party

There are 125 women in the 116th Congress—the most ever. This tracks along a larger trend of increasing representation for women in Congress. Data show that these seats are mainly concentrated on the Democratic side, and other gains for racial and ethnic minorities track similarly. Learn more from the updated “Vital Statistics on Congress.” 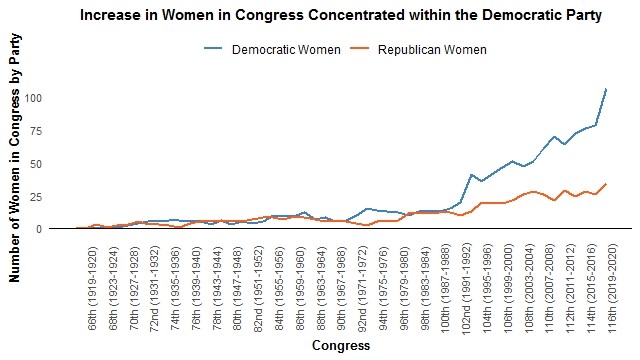 Commenting periods on proposed rule changes can delay, drum up support against, and ultimately defeat alterations to policy. An analysis of public comments shows that advocacy organizations are the most prolific in leaving comments. These diverse organizations give marginalized groups the opportunity to be a part of the overall policy conversation.

In both elected office and in candidates, African-Americans, particularly women, are underrepresented. Black women make up 6.5 percent of the voting-age population, yet only 2 percent of candidates for office. This disparity between the constituency and representation leads to issues most important to the African-American community being pushed to the background. Support networks for candidates and demonstrated leadership from other black elected officials and candidates is working to change this trend.

Figure of the week: Education participation rates in Africa increase, with some caveats

India is not sitting on the geopolitical fence

Tanvi Madan
War on the Rocks Wednesday, October 27, 2021
Get daily updates from Brookings