More students than ever before are enrolling in degree-granting institutions in the United States. Between 2001 and 2011, enrollment increased 32 percent while more women and more non-whites are entering postsecondary education than ever before (National Center for Educational Statistics). Brookings is home to extensive research on the benefits of and challenges to postsecondary education in America. This post highlights recent Brookings research on key areas related to the value of a college degree: the economic return to a college degree; student loan debt and paying for college; the changing model of postsecondary education; and overcoming barriers to college. All of it points to one conclusion, to quote Richard Reeves: “go to college.”

Is college worth it? (yes, almost always) 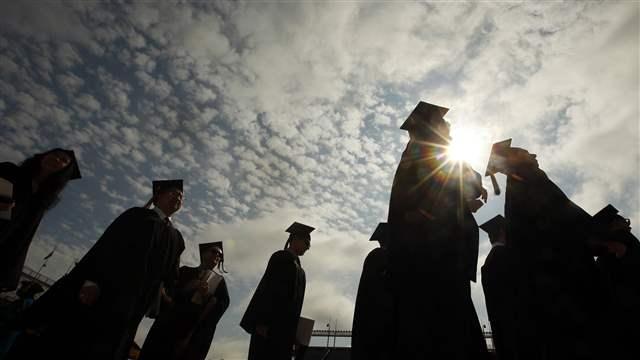 “In most respects,” The Hamilton Project has found, “a college degree has never been more valuable.” Even with rising tuition costs (which as scholars have also pointed out are not borne in full by many students), “the bottom line is this: while college may be 50 percent more expensive now than it was 30 years ago, the increase to lifetime earnings that a college degree brings is 75 percent higher. In short, the cost of college is growing, but the benefits of college—and, by extension, the cost of not going to college—are growing even faster.”

Read: Regardless of the Cost, College Still Matters

The Hamilton Project has also recently studied how earnings vary across college majors. In a new interactive feature, the project found that “lifetime earnings vary tremendously by major” but that “a college degree—in any major—is important for advancing one’s earnings potential.”

Gary Burtless argues that “The economic reward from attending and completing college has probably never been higher.” Despite the very real increase in costs to attend college and the tighter labor market college grads face today, the key to understanding why college still has such a big payoff, explains Burtless, “is that the prospects for twenty-somethings who do not complete college are much worse than those of the ones who do. What is more, the economic prospects of the young adults who do not complete college have worsened over time, and much faster than the prospects facing new college grads.”

Read: College Is Not a Ludicrous Waste of Money.

Richard Reeves and Kerry Searle Grannis identify “five strong starts for social mobility,” one of which involves college. Although earning a high school diploma is “vitally necessary,” it “is not sufficient” to succeed in today’s economy. “Attending college,” they write, “even if not for a full four-year degree, results in labor market rewards: each additional year of school means, on average, an extra 10% return in annual income.”

How big a problem is student loan debt? 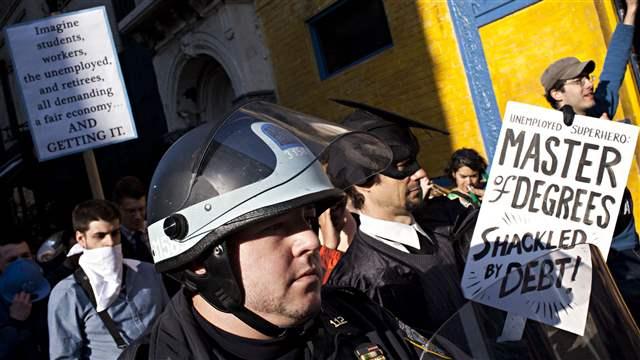 And yet, according to Beth Akers and Matt Chingos, “Our analysis of more than two decades of data on the financial well-being of American households suggests that the reality of student loans may not be as dire as many commentators fear.” Akers and Chingos analyzed a variety of factors that mitigate conclusions of a “crisis,” including: higher average debt levels of borrowers with graduate as opposed to bachelor’s degrees; average lifetime incomes of college-educated Americans are keeping pace with debt loads; and the monthly payment burden is about the same or a little less than it has been.

“These data indicate that typical borrowers are no worse off now than they were a generation ago, and also suggest that the borrowers struggling with high debt loads frequently featured in media coverage may not be part of a new or growing phenomenon,” they conclude.

Get more data and analysis on this issue here.

See also Susan Dynarski’s economic perspective on student debt, including whether there is a debt crisis; the costs and benefits of interest subsidies; and an income-based repayment system.

The Hamilton Project has also explored innovative policy proposals for higher education financing. These include: reforming federal lending and financial aid programs, such as the Pell Grant; expanding the use of “net-price calculators” to provide prospective students with a better estimate of the real cost of attending college; and a new system for federal lending that allows repayment schedules to rise and fall with a borrower’s income.

Learn more about these proposals.

Akers has also called attention to “the plight of recent college grads” who are facing lower earnings, or even unemployment, at the beginnings of their careers but have immediate debt burdens to contend with. “It’s important,” Akers says, “to allow graduates to repay their debts during the times in their careers when they are reaping the economic benefits of their degrees.”

Isabel Sawhill says there are three ways to make college more affordable: government or philanthropy pick up more of the cost; borrow the money; improve the productivity of the sector “so that students learn as much (or more) but at a lower (or the same) cost.

Read what she proposes as possible solutions to the third way.

Akers explains how Income Share Agreements are another solution to finance higher education. ISAs “allow students to raise funds to pay for their degrees by selling ‘shares’ in their future earnings,” she explains.

Read: How Income Share Agreements Could Play a Role in Higher Ed Financing

Are there alternatives to four-year college? 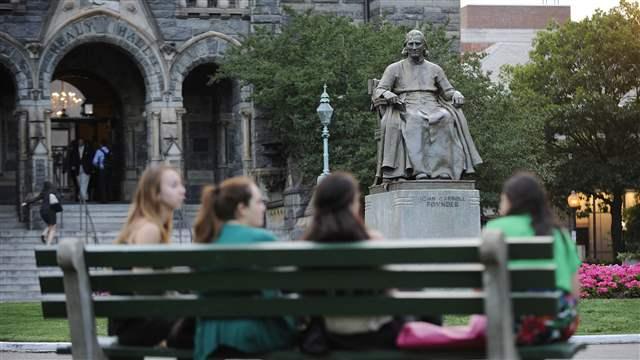 The traditional, four-year university model is no longer the sole recourse people have for postsecondary education.

Stuart Butler argues that college leaders should look at the recent experience of music, book and film industries and “recognize that the higher education industry is encountering a multi-pronged and existential threat composed of successive waves of disruptive innovation. This disruption will force top-to-bottom changes in the very concept of higher education and its relationship with the broader economy.”

In another piece, Butler explores what the future college business model will look like under today’s competitive pressures, which are intensifying, “particularly as the cost of information transfer to students declines to near zero.”

Community college “will remain the most appropriate option for postsecondary learning” for many, especially those from less advantaged backgrounds, according to Quentin Karpilow and Richard Reeves. Although community college enrollees exhibit low completion rates, there is, they argue, “huge scope for improving mobility outcomes through the development of the community college system, especially by boosting Associate degree attainment rates and helping students transfer to 4-year institutions.”

Read more here and find all of Brookings’s research on community colleges here. 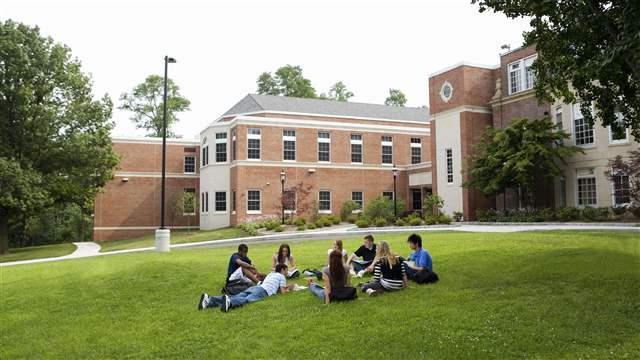 Brookings scholars, through their research, have established the economic returns on investing in a college education, even given increasing levels of student loan debt and the changing landscape of postsecondary education. Yet not every student is ready for college, especially those from low-income backgrounds, and many who enroll drop out, thus diminishing their chances of upward social mobility and competitiveness.

Should everyone go to college? Isabel Sawhill and Stephanie Owen’s research on the question shows that “on average, the benefits of a college degree far outweigh the costs.” The total wage premium over a lifetime for a bachelor’s degree is $570,000, they found. On average. But several “key dimensions significantly affect the return on a college degree,” they write, including: school selectivity, college major, and graduation rate.

Sawhill has also pointed to another issue: an uneven playing field when it comes to college completion, high school preparation, and the intersection of these with class. Despite the well-understood link between college and higher income, and taking into account the research on the key dimensions that affect the return on a college degree, Sawhill finds that half of college students, “and much higher proportions of poor and minority students,” drop out before completing a degree. Thus, “despite our dedication to the idea of a higher education system open to all,” she writes, “we are not doing a very good job of leveling the playing field. The result is that opportunity is still linked too strongly to class.”

Learn more about Sawhill’s work on Higher Education and the Opportunity Gap.

Ron Haskins testified to Congress that a “primary reason that disadvantaged students have trouble both getting into college and completing a degree is that they are not academically prepared to do college work.” He evaluated the major federal college-preparation programs and found that they have little or no impact on enrollment or graduation. He proposed a five-step reform to these programs.

In a Hamilton Project report on policies to address poverty in America, Bridget Terry Long observes that “academic preparation may be an equally formidable barrier to postsecondary education.”

Read her three recommendations for better addressing the academic preparation problem with the hope of improving rates of college success.

Also as part of The Hamilton Project’s report, Harry Holzer argues that the high drop-out rate among low-income youth and adults and, for those who complete degrees, a choice of low-compensation fields “hurt the poor, and weaken the impacts of large national investments in higher education.” He proposes state- and federal-level reforms to improve earnings prospects for graduates and “to encourage two- and four-year colleges to be responsive to labor market demand.”

Visit the archive of Brookings’s research on U.S. higher education, and also the Brown Center on Education Policy.

Richard V. Reeves and Beyond Deng
Thursday, May 26, 2022
Technology & Innovation