Higher education is fundamentally a long term investment.  Graduates will see the returns on their tuition dollars in the form of heightened wages aggregated over their working career.  Despite this concept, much of the public’s attention to the issue of financial returns of college has focused on outcomes that students face in the initial years following graduation.  In this discourse, former students are often portrayed as facing economic hardships so severe that they are forced to return home to live with their parents.  While this narrative misses the fundamental notion that a college degree should pay off in the long run (and not necessarily in the short run), there is an understandable reason for concern over the plight of recent graduates.

These graduates, who are carrying large debt burdens at a growing rate, earn wages that are well below the ones they will earn later in their careers.  With little experience to make them valuable employees, they are often the first to be let go when firms carry out lay-offs and the last to be hired when firms are hiring.  As a result, young graduates who are seeking work find themselves unemployed far more often than older graduates.  In September of this year, 20-24 year olds faced unemployment at a rate of 12.9 percent, compared to 7.2 percent for the entire workforce.[i]  With these things in mind, it is not unreasonable to worry about how these graduates are faring in the short-run.

A recent report from the National Center for Education Statistics at the U.S. Department of Education draws some attention to this issue.[ii]  The report is based on the most recent data from the Baccalaureate and Beyond Longitudinal Study (B&B).[iii]  Since the B&B has been repeated three times – with graduates from 1993, 2000 and 2008 – these data can be used to examine how the economic well-being of recent graduates has changed over time.  The latest survey gives some of the only evidence on how young graduates have fared in the post-financial-crisis economy.

As we already know from a variety of other data sources, students graduating in 2008 had accumulated greater debt burdens than the earlier cohorts of students.  Among those with debt, the average debt accumulated by graduation was nearly $25,000.  This was up from $22,000 for graduates from eight years earlier and up from $15,000 fifteen years earlier.[iv]  One notable finding that isn’t necessarily observable in other data sets is that average borrowing from federal sources declined for the most recent cohort.  This, combined with the overall increase in borrowing, suggests that students are borrowing greater amounts from the private lending market, which lacks the safety nets built into the federal lending program.

The most striking finding from the report is that recent graduates faced significantly lower earnings in the year following graduation than earlier graduates.  Among those who were employed, the average earnings of 2008 graduates measured one year following graduation was $34,400.  This was down from $39,300 for the cohort of workers that graduated eight years earlier in 2000.  The highest earnings were observed among students who didn’t borrow for college.  Students with the largest debt burdens (top 25 percent) saw even greater declines in earnings over this period ($6,000).

While there are likely many ways that this combination of diminished earnings and increased debt burdens caused graduates to change their behavior, the report identified two important ones.  First, fewer students from this most recent cohort were repaying their loans.  One year following graduation, 29 percent of those who graduated with debt were not making payments on their loans.  This was up from 25 percent among the students who graduated in 2000 and 18 percent for 1993 graduates.  While this would be consistent with increasing economic hardship, a large fraction of these borrowers are actually deferring repayment due to enrollment in graduate school.  Among the 2008 graduates who still owed on their debts but were not in repayment, 30 percent were deferring payments due to enrollment in graduate school.  Only 13 percent of them were not making payments due to financial hardship.  This suggests that a growing number of graduates were finding shelter from a weak economy by enrolling in graduate school in the year following graduation. 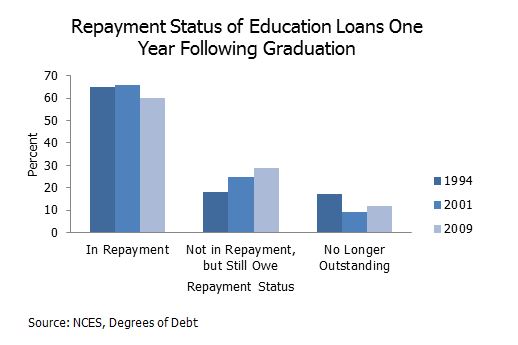 Another piece of evidence that is relevant to the popular discourse on student loans relates to housing.  The popular narrative regarding student loan debt often portrays high debt borrowers moving back home with their parents due to economic hardship.  The data in this report suggest that the trend has more to do with the macro economy than it has to do with debt, however.  It is clear from the figure below that regardless of their level of borrowing, 2008 graduates were returning home after college at a higher rate than eight years prior.  Even students with no educational debt were more likely to move home after college in 2008 than in 2000.  Students were most likely to move out on their own after college during the economic expansion in 2000. 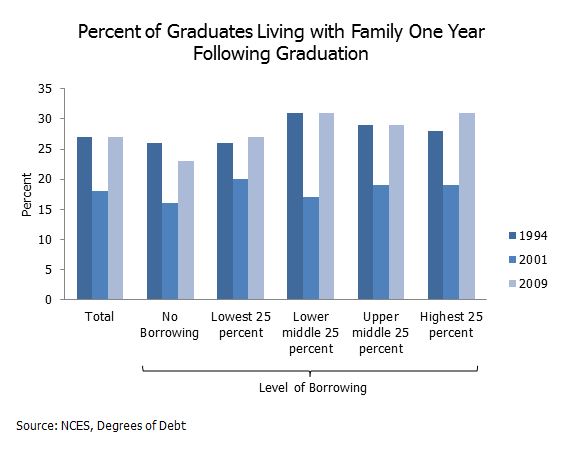 So, do we need to be worried about these young workers?  Yes, recent graduates at the beginning of their careers face earnings well below their future earnings and are at risk for large shocks due to the high rates of unemployment.  These findings do not indicate, however, that college degrees are a bad investment.  Instead, the turbulence of the initial period following graduation highlights the importance of loan repayment systems, like the existing income based repayment program, and perhaps make the case for drawing out the period of repayment over a longer horizon (as has been proposed in some recent work).  It’s important to allow graduates to repay their debts during the times in their careers when they are reaping the economic benefits of their degrees.

[iii] The Baccalaureate and Beyond Study (B&B) surveys a nationally representative sample of students completing bachelor’s degrees.  Non-completers and students earning certificates and associates degrees are not included in the sample.