In July, Brookings scholars Ben Wittes and Dan Byman profiled Hammami and many other U.S.-born terrorists in their analysis of U.S. government options in dealing with such terrorist suspects abroad. Of Hammami, they wrote:

Hammami, for his part, also went to fight with the Shabaab in 2006 [as did Daniel Maldanado]. Hammami had been President of the Muslim Students’ Association at the University of Alabama and had vehemently criticized the 9/11 attacks. While there he became one of the faces of Shabaab propaganda, using the nom de guerre “Abu Mansour al Amriki.” He was chosen to issue a response to President Obama’s 2009 speech in Cairo, meant to be an overture to the Muslim world. Hammami replied by criticizing Obama as false, praising the 9/11 attacks and highlighting the Shabaab’s relationship with Bin Ladin.


In 2012 Hammami broke with the Shabaab over its generally local focus and complaints that the more senior figures were corrupt, with tweets that blasted the organization for “persecuting, imprisoning, and killing foreign fighters; executing civilians; hoarding the spoils of war; unfairly taxing civilians; allowing prostitution and drugs in some areas under Shabaab control; and other crimes.” Hammami has the distinction of live-tweeting what he called a Shabaab assassination attempt. Despite these problems, he remains committed to the cause, telling a journalist via Twitter, “I believe in attacking u.s. Interests everywhere,” In 2007, the United States indicted him on terrorism charges, and in 2009 this indictment was superseded by another, also related to terrorism, that charged Hammami with leaving the United States to join a terrorist organization. He has not been captured, but the United States has put out a $5 million reward and in 2012 added him to the FBI’s “Most Wanted” list.

More about the government options and profiles of other terrorist suspects can be found in their report. 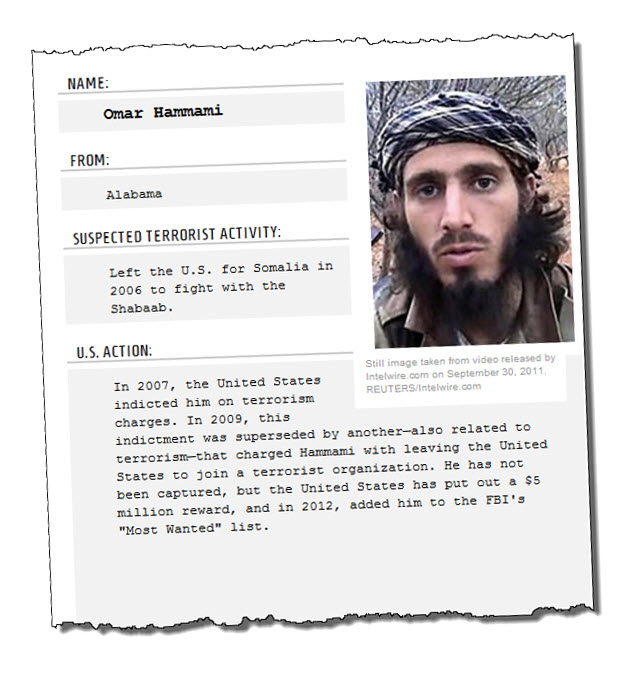