Political outsiders have had quite a good year in the United States (and elsewhere), and many pundits have attributed their success to voters’ profound dissatisfaction with the economy. Certainly there is plenty to be dissatisfied about, including growing inequality of income and wealth and stagnation in real wages. But there are positives as well, including an improving labor market, low inflation, and low gasoline prices. How do people really feel about the U.S. economy?

This post will not tackle the substance of Americans’ worries about the economy but instead highlights a puzzle arising from pollsters’ efforts to quantify those worries. I’ll show that, when Americans are asked specifically about the economy, in an apolitical context, they are for the most part not nearly as pessimistic as the conventional wisdom would have it. Instead, they answer more or less as they have done in the past at a similar stage of the business cycle. But, at the same time, when asked more generally about the way things are going in the United States, or about whether the country is going in the right direction, a strong majority gives downbeat answers, to an extent that is quite different from how they have responded in the past. Understanding the divergence between the replies to these two types of surveys is important, and I end the post with a few thoughts on possible reasons.

Surveys of consumer “sentiment” or “confidence,” such as those that have been conducted for many years by the University of Michigan and the Conference Board, aim to measure how people feel about their own finances and the state of the economy in general, without trying to elicit households’ political leanings or voting intentions. These surveys have proved useful in forecasting consumer spending and other aspects of household economic behavior, and they are accordingly closely followed by economists. Interestingly, in recent years, surveys of household sentiment have generally been more positive than one might anticipate, based on the gloomy prevailing narrative.

To illustrate, Figure 1 presents data from 1979 to the present, taken from the University of Michigan’s consumer sentiment survey, on how households view their current and expected (over the next year) personal finances. Shown for comparison is the response to a more general, open-ended question (asked by Gallup) about whether people are satisfied (or not) with “the way things are going” in the United States. The three sets of responses, and all other data series mentioned in this post, are measured on comparable scales: Percent positive (“better” or “satisfied”) minus percent negative (“worse” or “unsatisfied”) + 100. [1] A score of 100 is thus the dividing line; values above 100 imply that a plurality (ignoring the undecided) are “satisfied” or see things as getting better. 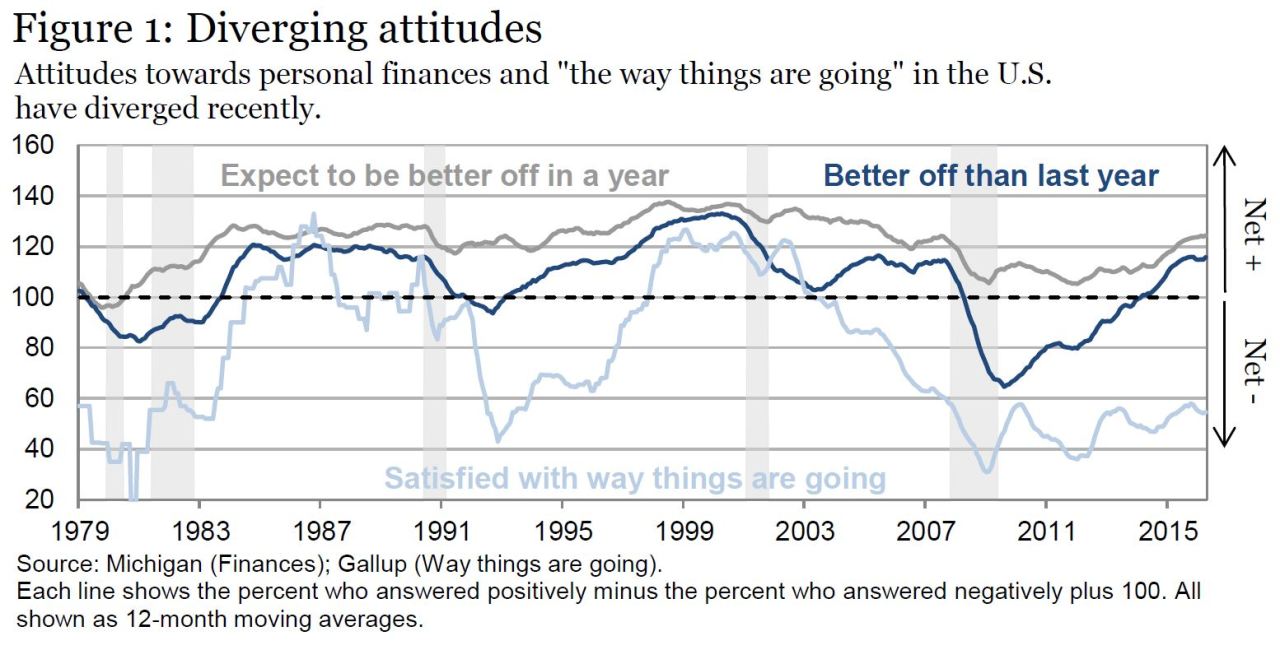 The three series do tend to move together. Not surprisingly, for example, all decline around recessions (shown as shaded bars in the figure). However, the recent divergence between people’s views of their own finances and their assessments of “the way things are going” more generally is striking. The reading on the “better off than last year” gauge plunged during the recent recession but has risen steadily and, excepting a late 1990s surge, is now as high as in any period since 1979. Respondents’ expectations for changes in their personal finances vary less but are also now relatively high—close to where they were during the economic recovery of the 1980s. In contrast, people have continued to tell Gallup that they are very unsatisfied with the way things are going. That index began to fall at the beginning of the last decade and was already very low when the recent recession hit. Rather than recovering with the economy and with sentiment indexes, however, this measure of national mood has remained at historically low levels.

The recent contrast between the behaviors of consumer sentiment and broader indicators of public satisfaction is robust to alternative ways of framing the question. For example, a possible explanation of the divergence seen in Figure 1 is that people feel reasonably good about their own situations but are worried about the economy as a whole. Another possible resolution follows from the observation that Figure 1 compares actual and expected changes in personal finances with the level of satisfaction or dissatisfaction with the state of the country: It’s logically possible that people simultaneously see near-term improvements while remaining pessimistic about the longer-run prospects for the economy. To try to address both possibilities, Figure 2 below compares responses about “the way things are going” with the responses to a question from the Michigan survey about expected business conditions over the next five years. [2] Responses to the latter question should elicit how people feel about the economy as a whole, as opposed to their personal situations, and a five-year window should capture more long-term views of the economy.

Figure 2 shows that consumers’ expectations about business conditions over the next five years are indeed correlated with their assessments of the way things are going in the country. In particular, the decline in expected business conditions that began around 2000 might help explain the fall, beginning at about the same time, in the broader measure of satisfaction. [3] However, Figure 2 also shows the same puzzling divergence of the past few years seen in Figure 1: Expected business conditions (University of Michigan) have recovered to more or less normal levels, while satisfaction with the way things are going (Gallup) has remained historically low.

Demographic breakdowns of sentiment indicators also present puzzles for the prevailing narrative of widespread economic dissatisfaction. Figure 3 shows people’s expectations of business conditions in five years (the same variable shown in Figure 2) broken down by age group. Despite the well-publicized problems of young adults (student debt, inability to escape their parents’ basements, etc.), young people are the most optimistic about the longer-term condition of the economy, with net positive ratings close to all-time highs. Young people are also strongly positive, both absolutely and relative to other age groups, about their personal financial outlooks (data not shown). Figure 3 shows that older people are the most pessimistic about business conditions, but not notably more pessimistic than the average of the post-1979 sample.  [4]

Increasing income inequality is often cited by political observers as a reason for economic dissatisfaction. Inequality is indeed a serious concern. A large share of the income gains from the ongoing economic recovery have accrued to the better off, which would lead us to expect those at lower incomes to be the most pessimistic. Figure 4 breaks down households’ responses to the question about expected business conditions into thirds, based on reported income. Not surprisingly, those with highest incomes are most optimistic about the economy. But all three groups have become more optimistic since the recession, and the spread among the income terciles is only marginally greater than in the past. Similar patterns emerge when people at different income levels are asked about their personal financial situations (data not shown).

In summary, the University of Michigan’s survey of consumer attitudes has shown a normal cyclical pattern of improvement in recent years, both in how people feel about their own economic prospects and in their expectations for the economy as a whole.  [5] In contrast, measures of the national “mood,” like Gallup’s “way things are going” question or questions about the “direction of the country,” show a high level of dissatisfaction. What accounts for the discrepancy?

There are of course multiple possibilities, not mutually exclusive. For example, traumatic national events, including the 9/11 attacks and the 2007-2009 financial crisis, may have had lasting effects on public confidence that are not captured in their near-term assessments of economic performance. (Satisfaction with the way things are going did begin a sustained decline around 2001, at about the time of 9/11, the end of the tech bubble, and the 2001 recession.) It may also be that, in responding to broad questions about the direction of the country, people are taking into account non-economic concerns, such as social problems and cultural fears. Such factors must certainly be part of the story, but it should be noted that many social indicators (such as teenage births and crime rates) have been moving in generally favorable directions.

I suspect that greater social and political polarization itself has a role to play in explaining reported levels of dissatisfaction. To an increasing extent, Americans are self-selecting into non-overlapping communities (real and virtual) of differing demographics and ideologies, served by a fragmented and partisan media. We see, for example, a sharply widening partisan gap in presidential approval ratings (Figure 5). As the figure shows, to a greater extent than in the past, people tend to have strongly positive views of a president of their own party and strongly negative views of a president of the opposite party.  [6]

In a highly polarized environment, with echo-chamber media, political debates often become shrill, and commentators and advocates have strong incentives to argue that the country’s future is bleak unless their party gains control. In this environment, it seems plausible that people will respond more intensely and negatively to open-ended questions about the general state of the country, while questions in a survey focused narrowly on economic conditions elicit more moderate responses. Without doubt, the economic problems facing the country are real, and require serious and sustained responses. But while perceptions of economic stress are certainly roiling our national politics, it may also be that our roiled politics are worsening how we collectively perceive the economy.

[1] The exact wording of the questions is as follows: (1) “We are interested in how people are getting along financially these days. Would you say that you (and your family living there) are better off or worse off financially than you were a year ago?” (2) “Now looking ahead–do you think that a year from now you (and your family living there) will be better off financially, or worse off, or just about the same as now?” (3) “In general, are you satisfied or dissatisfied with the way things are going in the United States at this time?”

[2] The full question is: “Looking ahead, which would you say is more likely–that in the country as a whole we’ll have continuous good times during the next 5 years or so, or that we will have periods of widespread unemployment or depression, or what?”

[3] It’s interesting that expected business conditions were highly favorable during the stock market boom of the late 1990s but less so during the housing boom of the early 2000s.

[5] Qualitatively similar findings can be seen in the Conference Board’s index of consumer confidence.