Since the onset of democratic rule in 1994, South Africa has experienced modest reductions in household poverty levels, coupled with high and rising inequality. Like elsewhere in Africa, of particular concern is the youth (those between ages 15 and 24) unemployment rate, which has been trending upward since 2008. More pressing, though, is that at 56 percent, South Africa’s youth unemployment rate is considerably higher than in comparator countries. Moreover, South Africa’s current economic growth trajectory is not producing the volume and type of jobs required to reverse these trends in inequality and unemployment.

Unfortunately, in South Africa, manufacturing—traditionally one of the largest employers of low-skilled workers—has experienced an annual growth rate of less than 1 percent between 2010 and 2018. At the same time, economic activity has shifted toward financial and community services, which are relatively high-productivity sectors in which jobs are more likely to be high skilled. With this growth path unsuited for producing the jobs required in the country, we consider whether a number of “industries without smokestacks” (IWOSS), which share a number of characteristics with manufacturing, may have the potential to address South Africa’s high levels of inequality and unemployment.

Importantly, IWOSS sectors have the potential to absorb low- and medium-skilled labor—an important facet for countries like South Africa with a large number of unemployed who are predominantly low skilled. They are also tradable, have relatively high value added per worker, exhibit the capacity for technological change and productivity growth, and show some evidence of scale and/or agglomeration economies.

We specifically consider the potential of the IWOSS sectors of tourism, horticulture, agro-processing and transit trade (logistics) based on their ability to create several types of jobs across the skills spectrum in South Africa. Our recent working paper, in which we assess the employment potential of these four sectors through quantitative analysis and firm surveys, finds that IWOSS—most notably tourism and horticulture—have a role to play in generating the numbers and types of jobs required to address youth unemployment in South Africa.

More specifically, in the paper, we estimate the number of jobs to be created across sectors between 2019 and 2028, as well as whether the skills required to support these jobs would be available in the youth labor force by considering the sectoral skills gap—the gap between the set of skills available in the population and the set of skills required by the sector—across occupations. We provide two scenarios for these metrics: 1) South Africa’s current growth path, and 2) a higher growth-path scenario where a higher rate of job creation is applied to the four selected IWOSS sectors.

Under the current growth path, we find that, although South Africa is already on an IWOSS-intensive growth path, the IWOSS sectors most intensive in the employment of low-skilled workers (horticulture and agro-processing) can be expected to account for just 11.1 percent of the increase in IWOSS employment between 2019 and 2028. In terms of skills gaps, projections show that there will be a surplus of skills in the youth labor force for jobs at all education levels, with the surplus decreasing considerably from over 1 million individuals for both pre-secondary and completed secondary education, to just 33,900 for jobs requiring a post-graduate degree. The considerably lower surplus of individuals with higher levels of educational attainment emphasizes the mismatch between skills supply and skills demand in South Africa. In other words, South Africa’s growth has been increasingly concentrated in services sectors in which employment is more likely to be high-skilled, while the majority of the population have had, and continue to have, low levels of educational attainment. This trend has led to a considerable surplus of low-skilled individuals for employment, which, on the current growth path, can be expected to increase in the future.

In the higher growth-path scenario, tourism and horticulture will account for 20 and 6 percent, respectively, of the employment change between 2019 and 2028 (Table 18). Given the large number of individuals with secondary or lower education, our projections suggest that there will be a sufficient number of individuals to fulfil new jobs in low-skilled occupations even in the higher-growth scenario.  In contrast, there is likely to be an inadequate supply of individuals with the prerequisite qualifications in relation to new jobs in high-skilled occupations in the IWOSS sectors. For youth to be employed in these occupations, targeted support will be necessary to ensure that they obtain the appropriate qualifications. 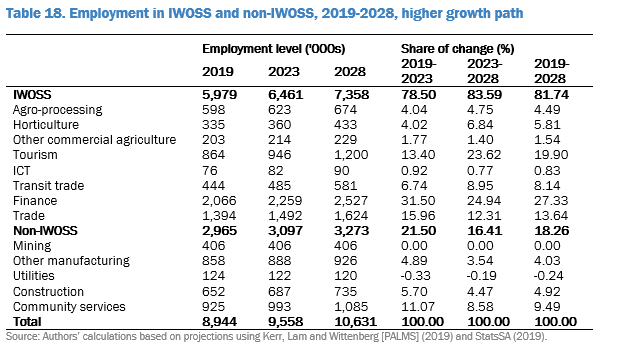 To supplement the implications of the predicted growth paths for employment as well as assess skills gaps, we conducted surveys with several firms in the IWOSS sectors. Our firm survey results suggest that, while tourism and horticulture provide the most scope for absorbing low-skilled individuals, the agro-processing and transit trade industries cater toward higher-skilled individuals. Notably, in terms of future formal skills requirements, most surveyed firms indicated that a secondary education would be sufficient to fulfill new occupational roles. A much smaller proportion of roles would require a post-secondary (certificate/diploma) qualification.

The firm survey also explored skills deficits in six skills groups. We find high skills deficit in certain key skills groups (basic, social, and resource management), suggesting that finding youth to fill future positions in most of these sectors may still be challenging. In light of the transformative impact that the Fourth Industrial Revolution will have on the labor market, we also asked respondents about the value of digital skills. Importantly, we find that such skills would become increasingly important in the medium term, and there will be little scope for future employees who do not possess at least some form of rudimentary digital literacy skills. This finding suggests that the government should initiate a comprehensive digital program in primary and secondary schools with the aim of equipping students with basic computer skills.

Key to appreciating and realizing the employment potential of the four selected IWOSS sectors is understanding the constraints that currently inhibit their growth. In our paper, we identify the following key constraints inhibiting overall economic growth:

In terms of sector-specific constraints, we identify, inter alia, crime and distance from key source markets (tourism); high input costs and climate change (horticulture); lack of access to capital and stringent regulations and standards (agro-processing); and inefficiency in the transportation of goods (transit trade).

Ultimately, our findings suggest that IWOSS have a role to play in generating the numbers and types of jobs required to address youth unemployment in South Africa. Among the sectors considered, tourism and horticulture seem particularly well placed in this regard. However, importantly, challenges remain both from the perspective of the broader economy and individual sectors. South Africa’s overall growth performance must be improved, and sector-specific constraints must be addressed—especially those related to skills—in order for the potential of these sectors to generate employment opportunities to be achieved.